I have just returned from ten days at EAA AirVenture in Oshkosh, Wisconsin. While the numbers are not in, it was surely a record-breaking event. I can’t remember seeing that many airplanes there in the 35 years I have consistently attended.
One of the personal highlights for me this year was that my son, Job, made his first solo flight to the event in the family Taylorcraft L-2. Longtime readers may remember watching him grow up on the back of the magazine. Well, he is all grown up now, a certified warbird nut, a private pilot, and a commercial helicopter pilot. I had the opportunity to spend a lot of time sitting under the wing of his plane in the warbird area this year and had some great conversations with other young men interested in getting involved in flying warbirds.

Historically, the warbird movement has seen second (and sometimes third) generation warbird pilots. Some examples that quickly come to mind are Steven Hinton Jr., Taylor Stevenson, Ladd Gardner, and Evan Fagen. All are exceptional pilots who grew up watching their fathers operate warbirds. Learning from the best, so to speak. More recently, one of Job’s friends, Ray Brown, has followed in his father’s footsteps flying the family Beech C-45. As a community, we have done a great job of passing the torch to our children.

But what about those who aren’t blessed to have family warbird aircraft and the generational heritage of flying them? It struck me this week how many young people have the interest, but struggle with finding a way into the cockpit of warbirds, or even taildraggers. This is a challenge that our community should consider and each individually work to find a way to help grow our pilot pool. I consistently hear from my peers that they are concerned about the future of the warbird community due to a lack of interest from younger people. My argument is that there is plenty of interest, but there is an accessibility issue. Job has a young friend who has expressed to him on a number of occasions that he feels his dream to fly warbirds is a “pipe dream.” I am sure there are others out there. I believe it is up to each of us to find a way to help those that have an interest. It may be as simple as helping them find a way to get taildragger experience, or it may go as far as going dual in your trainer aircraft with a goal toward a solo.

Organizations like the CAF seem to have recognized the need for younger pilots and have provided opportunities to qualified younger members. This is a fantastic start and something that each of us can build on individually. I hope that you will join me in putting some thought into how you can help the young achieve a dream. If nothing else, you are expanding the potential future buyers for your aircraft asset!

Flight Log  – UPDATES FROM AROUND THE WORLD The latest in news, including an initiative in the UK that will see a number of Spitfires rebuilt, while training the technicians of the future.

Navigator – WHERE TO GO, WHAT TO SEE – Seattleʼs Pacific Northwest offers a wealth of museum destinations for the aviation-minded.

Products- WHAT TO BUY AND WHERE – “Whatʼs New” in the worldʼs marketplace for the discerning warbird memorabilia collector.

Tailspin – “CONFIRM SOULS ON BOARD?” – Maxi Gainza, the Spitfire pilot and owner, explains why he is never really alone in the cockpit.

IKE’S CONNIE – The elegant Lockheed Constellation is a much-missed sight in the skies over the US. That situation will be rectified once Ikeʼs Connie, the very first Air Force One, returns to flight. Warbird Digest takes you inside the hangar for a full report.

MUSTANG MASTERPIECE – A genuinely historic P-51 Mustang has recently returned to flight, and it is a real attention-getter. Only Warbird Digest gives you the full story of this true warrior.

WARBIRD WIDGEON – This wolf in sheepʼs clothing could pack a real punch against Hitlerʼs submarine wolfpacks.

Click on the image below to purchase this issue in print or digital. 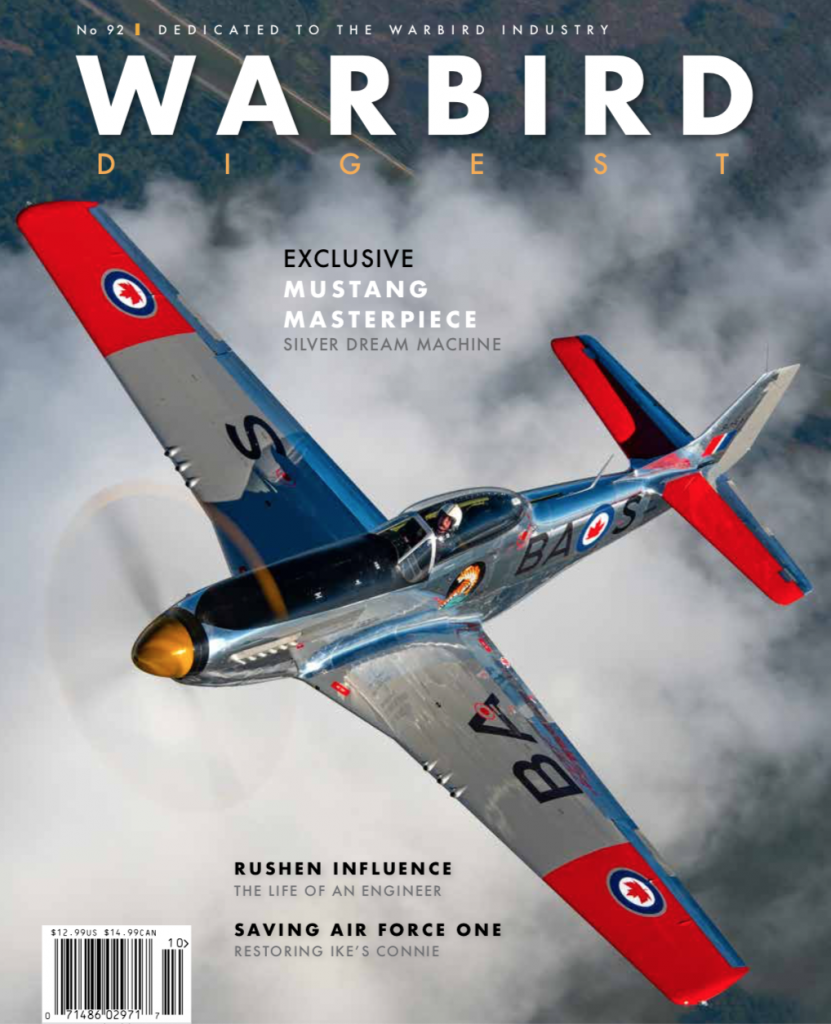