The 39th annual Sun ‘n Fun International Fly-In and Expo was quite a success, with a wide variety of aircraft both on display and in the air, and while we overheard some grumbling that the crowds seemed smaller than in previous years, Sun ’n Fun President John “Lites” Leenhouts announced that attendance was in fact five percent higher than the previous two years. 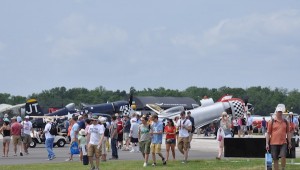 Sun ‘n Fun was founded in 1974 and attracts owner-pilots from all across the United States and around the world who fly their vintage, homebuilt and ex-military aircraft to Lakeland Linder Regional Airport in Lakeland, Florida for some (ahem) sun and fun. The sun was very much in evidence on Wednesday, though it was mostly overcast for the remainder of the show. The clouds did not put a damper on the festivities however and the ceiling was high enough to allow for the aerial exhibitions to take place in full view of the gathered spectators. 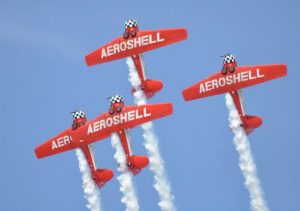 Memorable flying demonstrations were staged by two B-25s: the Disabled American Veterans’ “Panchito” and the CAF Yellow Rose Squadron’s “Yellow Rose”, the pair of P-51 Mustangs, “Crazy Horse 2” from Stallion 51 and the CAF Red Tail Squadron’s “Tuskegee Airmen” and James Tobul’s Corsair “Korean War Hero”. Also notable was the  precision flying demonstrations by the Aeroshell Aerobatic Team in their AT-6 Texans, but perhaps our favorite performance of the show was put on by John Mohr of Mohr Barn Storming; simply put: nobody flies a Stearman like John.

Classic Jets were well-represented at the show as well with flying demonstrations from the Black Diamond Aerobatic Jet Team, an A4 Skyhawk and a pair of L-39 Albatrosses. JetBlue, a corporate sponsor of the event flew an Airbus A320 the the event with 75 high school and college students from nine different aviation high schools and colleges in New York and Florida to tour the Central Florida Aerospace Academy located at the airport as well as take in the the show.

A moving ceremony accompanied the induction of three aviation legends into the Flight Path of Fame: Bob Hoover, Jimmy Leeward and Fred Cabanas. 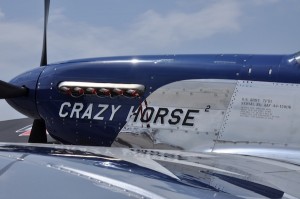 The over 250 discussion forums and hands-on workshops were well-attended and covered subjects from Aviation Welding to Zeppelin History and every conceivable topic between. Friday and Saturday’s schedule included night aerial displays shortly after sunset, followed by spectacular fireworks which were predictably crowd pleasing, providing exciting finales to already exciting days.

Sun ‘n Fun will be celebrating it’s 40th anniversary year next year, April 1-6 2014, so you’ve got plenty of time to plan your trip to what promises to be their biggest and best show yet.

We’ve posted a large gallery of pictures on our Facebook page HERE, and give us a “like” while you’re at it to keep abreast of the latest in warbird news.