As most of our readers will know, the Royal Air Force celebrates their centenary as the world’s first independent air arm on April 1st. As such, the RAF Museum has been planning a series of events to celebrate this major milestone, and the party kicks off this coming weekend at RAF Museum Cosford in Shropshire with the 100 Years of the RAF Festival. The official press release continues as follows…

The ‘100 Years of the RAF Festival’ is taking place at RAF Museum Cosford on the April 1st and 2nd, 2018. Re-enactors, living historians, interpreters and a variety of entertainers bring the Museum to life with authentic experiences for visitors to enjoy.  A walk-through history, exploring the 100 years of the Royal Air Force, vintage vehicles and children’s activities will be nestled amongst the historical, pioneering aircraft on display and will engage visitors throughout their tour of the Museum site.

WHAT’S ON over the festival weekend:

A walk-through RAF history will include a First World War display, have a go anti-aircraft game (charges apply), engine demonstrations (Monday only), plotting table, vintage vehicle display, interactive storytelling, Second World War Camp and a Vulcan Scramble to name but a few!  Activities and displays will be spread across the entire site for the FREE two day event which runs from 10am until 5pm both days. On arrival, make sure to pick up your free handy festival site plan to help guide you round the site and ensure you don’t miss out on any of the displays!

The Museum’s on-site caterers Kudos will be joining in the celebrations serving RAF100 birthday cupcakes, plus, wood-fired pizzas and ice-creams will be served from vintage vehicles outside the Visitor Centre all day.  The Museum will be operating a free shuttle bus service from Cosford train station for any visitors travelling by train or using the park and ride and will run continuously throughout the day.

The ‘100 Years of the RAF Festival’ will run from 10am to 5pm on Sunday 1 and Monday 2 April 2018.  On arrival, make sure to pick up your free handy festival map to help guide you round the site and ensure you don’t miss out on any of the displays!  The Museum will also be operating a free shuttle bus service from Cosford train station for any visitors travelling by train or using the park and ride and will run continuously throughout the day. 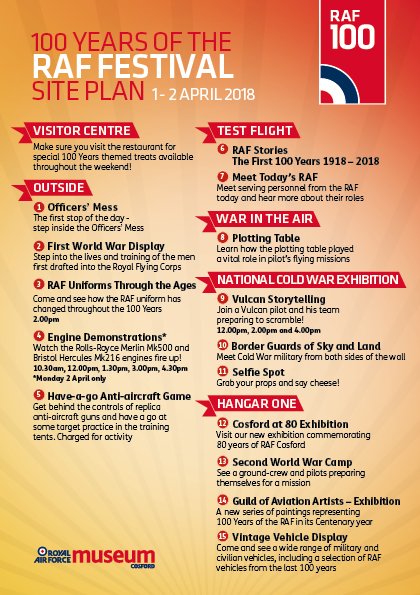 To celebrate 100 years of the Royal Air Force, the RAF Museum has set a new centenary year challenge to complete 100K in 100 days. The Spitfire 100K Challenge is virtual and launches on 1 April 2018. Challengers have exactly 100 days to walk, jog or run 100km in a location of their choice. Participants will be given a distance log to record their 100K before being rewarded with a spinning propeller Spitfire 100K Challenge medal. Registration is still open via the Museum website www.rafmuseum.org with over 600 people signed up from multiple RAF bases and countries across the world including New Zealand, Canada, Japan and America. Limited edition Spitfire 100K Challenge T-shirts are also available to purchase when registering online.

The entry costs is £20 per person, and all proceeds from the Spitfire 100K Challenge will go towards the RAF100 Appeal, a joint venture between the Royal Air Force and four major charities: the RAF Benevolent Fund, RAF Association, RAF Charitable Trust and the RAF Museum. 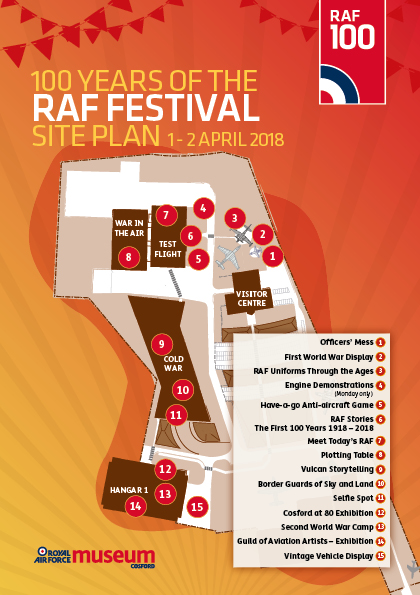 A new display celebrating the first 100 years of the RAF will be open to visitors in time for the festival weekend. Highlighting the principal roles of the RAF; Attack, Defence, Support and Prepare, the display also incorporates a snapshot timeline and artefacts spanning 100 years including uniforms, equipment, tools, personal possessions and commemorative items. In addition, a collection of life-size photographic metal cut outs will be positioned around the Museum site, sharing the stories of RAF personnel who have held a variety of roles within the service. The new display is supported by National Lottery Players through the Heritage Lottery Fund and founding sponsor BAE Systems.  It is part of the RAF Museum’s RAF Centenary Programme across its two sites in London and Cosford.