In celebration of the 75th anniversary of D-Day on June 6, Phillips 66® Aviation and Phillips 66® Lubricants are proud to support the “Miss Montana to Normandy” mission to fly a historic C-47 warbird in Daks Over Normandy, a flyover of more than 30 international aircraft to commemorate the day the Allies invaded Western Europe in World War II. Phillips 66 Aviation is contributing fuel, and Phillips 66 Lubricants is supplying aviation engine oil and Hydraulic Oil.

Miss Montana will fly alongside the D-Day Squadron, the American fleet of C-47s participating in the flyover. The Squadron will depart from Connecticut on May 19 and travel together on what’s known as a Blue Spruce Route across the North Atlantic.

Miss Montana will depart from Northstar Jet (KMSO) in Missoula on May 13, and along the route to Connecticut, will stop at a selection of Phillips 66 branded FBOs to refuel and undergo any necessary inspections. The FBOs will include West Jet Air Center (KRAP) in Rapid City, South Dakota, Yingling Aviation (KICT) in Wichita, Kansas, Beaver Lake Aviation (KROG) in Rogers, Arkansas, and Tri-City Aviation (KTRI) in Tri-Cities, Tennessee.

“Phillips 66 contributed many significant advancements during the war, including a high-octane fuel to increase power and efficiency for long-range flight,” says Lindsey Grant, Manager, General Aviation, U.S. “We’re excited to celebrate and honor all of the heroes and veterans that served, as well as the role aviation played in the Allied victory.”

Miss Montana is currently exhibited in the Museum of Mountain Flying in Missoula. Originally the idea to purchase the airplane was inspired by museum co-founder Dick Komberec. Dick, his son Eric, and a group of aviation enthusiast have spearheaded efforts to fundraise, restore the aircraft, and prepare her for the international flight. 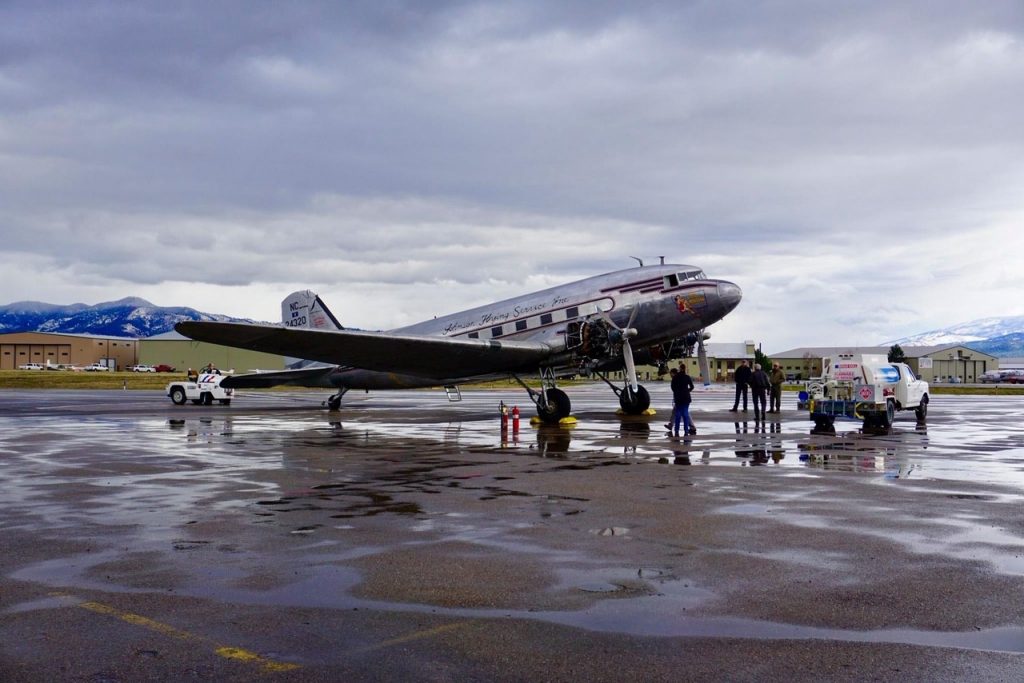 “Miss Montana never got the chance to enter foreign services as her completion date was at the end of World War II,” says Tia Komberec, member, board of directors, Miss Montana to Normandy. “Her original mission was to serve our country, and this is one of the reasons we are flying her to Normandy – to complete the mission she was built for.”

The original designation “Miss Montana” was the nose art on the B-25 flown by Capt. Malcolm W. Enman, who served during World War II. Enman was a highly-decorated soldier and received several accolades for his service, including three stars for participation in three major campaigns, the Gilbert, the Marshall and the Caroline Islands. Enman, now deceased, is the father-in-law of Dick and grandfather of Eric, who plan to make the trip to Normandy as pilots.

“Phillips 66 has a rich history of innovation and a deep connection to World War II,” says Grant. “And as we celebrate the momentous achievements made in the past, we also look forward to the many more significant contributions Phillips 66 will make in the aviation industry.”

A send-off gala will be held May 11 at the Museum of Mountain Flying hangar at Missoula International Airport.  For more details, and to learn more about Miss Montana, the D-Day Squadron and Daks over Normandy, visit missmontanatonormandy.com. To donate to the mission, please click here.

About the Museum of Mountain Flying

Museum of Mountain Flying’s mission is to preserve for future generations, the legends, lore and historical legacy of pilots and other individuals whose pioneering aviation exploits helped bring America’s Rocky Mountain West into the Air Age. The museum is a 501(c)(3) nonprofit organization located in at the Missoula International Airport in Missoula, Montana. For more information, visit www.MuseumofMountainFlying.org.

Phillips 66 is one of the largest refiners in the United States and a top supplier of jet fuels and avgas to private, commercial and military aviation. Our extensive network of refineries, pipelines and supply terminals translates into secure, cost-effective supply now and in the future. Phillips 66 Aviation supports the nation’s largest branded dealer network. Currently, Phillips 66 Aviation supplies jet fuel and avgas to a network of more than 800 Fixed Base Operations. For more information, visit www.Phillips66Aviation.com and like us on Facebook. Phillips 66 is a trademark of Phillips 66 Company or one of its subsidiaries.

Phillips 66 is a diversified energy manufacturing and logistics company. With a portfolio of Midstream, Chemicals, Refining, and Marketing and Specialties businesses, the company processes, transports, stores and markets fuels and products globally. As one of the largest finished lubricants suppliers in the U.S., Phillips 66 Lubricants is known for manufacturing and marketing high-quality base oils and sophisticated formulations in three lubricant brands: Phillips 66®, Kendall® Motor Oil and Red Line® Synthetic Oil. These premier products reach across every key market sector, including automotive, trucking, agriculture, aviation, power generation, mining and construction. For more information, visit www.Phillips66Lubricants.com and like us on Facebook.