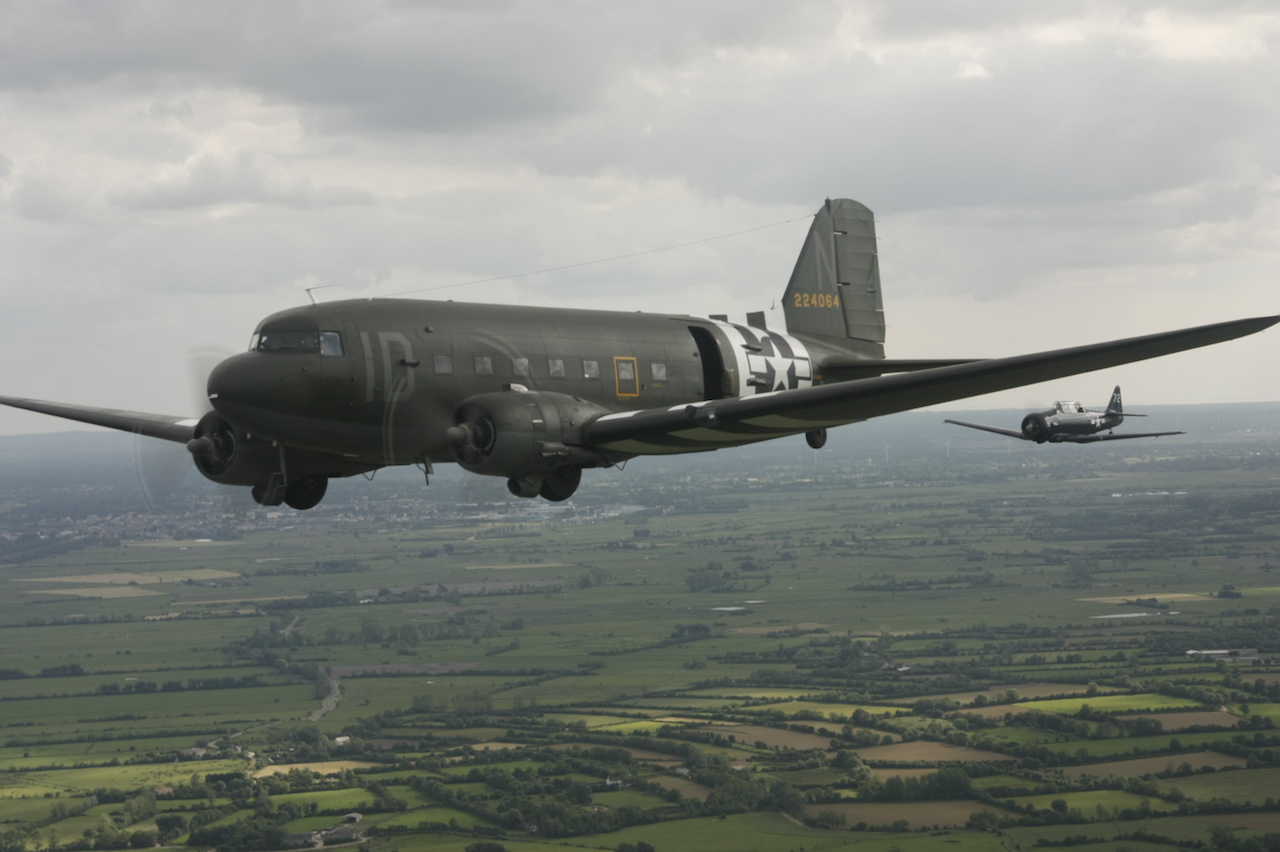 PRESS RELEASE – An historic Douglas C-47 Skytrain troop transport aircraft will highlight this year’s World War II Heritage Days, hosted by the Commemorative Air Force (CAF) Dixie Wing April 30-May 1, 2016. This restored plane, “Placid Lassie,” participated in the D-Day invasion of Europe and was utilized in the Market Garden operation in Holland. Ground tours will allow the public a close-up look at this historic aircraft. The CAF Dixie Wing also plans a reunion with the C-47 and a veteran paratrooper, Jim “Pee Wee” Martin. A member of the 101st Airborne “Screaming Eagles”, Martin will be among several veterans honored throughout the WWII Heritage Days weekend.

“Placid Lassie” was delivered to the United States Army Air Corps in early 1943, assigned to the 74th squadron of the 434th Troop Carrying Group in England to prepare for D-Day. The C-47s, also known as Dakotas, towed massive cargo gliders and dropped more than 24,000 paratroopers on the morning of June 6, 1944. Lassie and her crew flew several missions on that fateful morning, first towing gliders and later carrying paratroopers. The war continued for the plane and her crew, participating in all of the major engagements up to and including Operation Market Garden, the attempted liberation of Holland, and the crossing of the Rhine.

Jim “Pee Wee” Martin joined the now famous 506th Parachute Infantry Regiment at Camp Toccoa in July 1942 as one of Col. Robert F. Sink’s “Toccoa Originals” made famous by the HBO mini-series, “Band of Brothers”.  Martin was given the nickname “Pee Wee” because he was the lightest man in the regiment. Martin parachuted into Normandy and later jumped into Holland in the leading wave of “Operation Market Garden”.  He also participated in The Battle of the Bulge and operations in Germany in 1945.  Martin is one of the last remaining “Toccoa Originals” who is still traveling. “We are so honored to have such a notable aircraft appear for World War II Heritage Days this year,” said Dixie Wing event co-chairman Chris Madrid. “We seldom get to see an authentic aircraft from such a momentous event in history, and ‘Placid Lassie’ will be right here with us for our 13th annual event. Jim Martin’s appearance will make it an unprecedented occasion, and we will be delighted to see him here.” 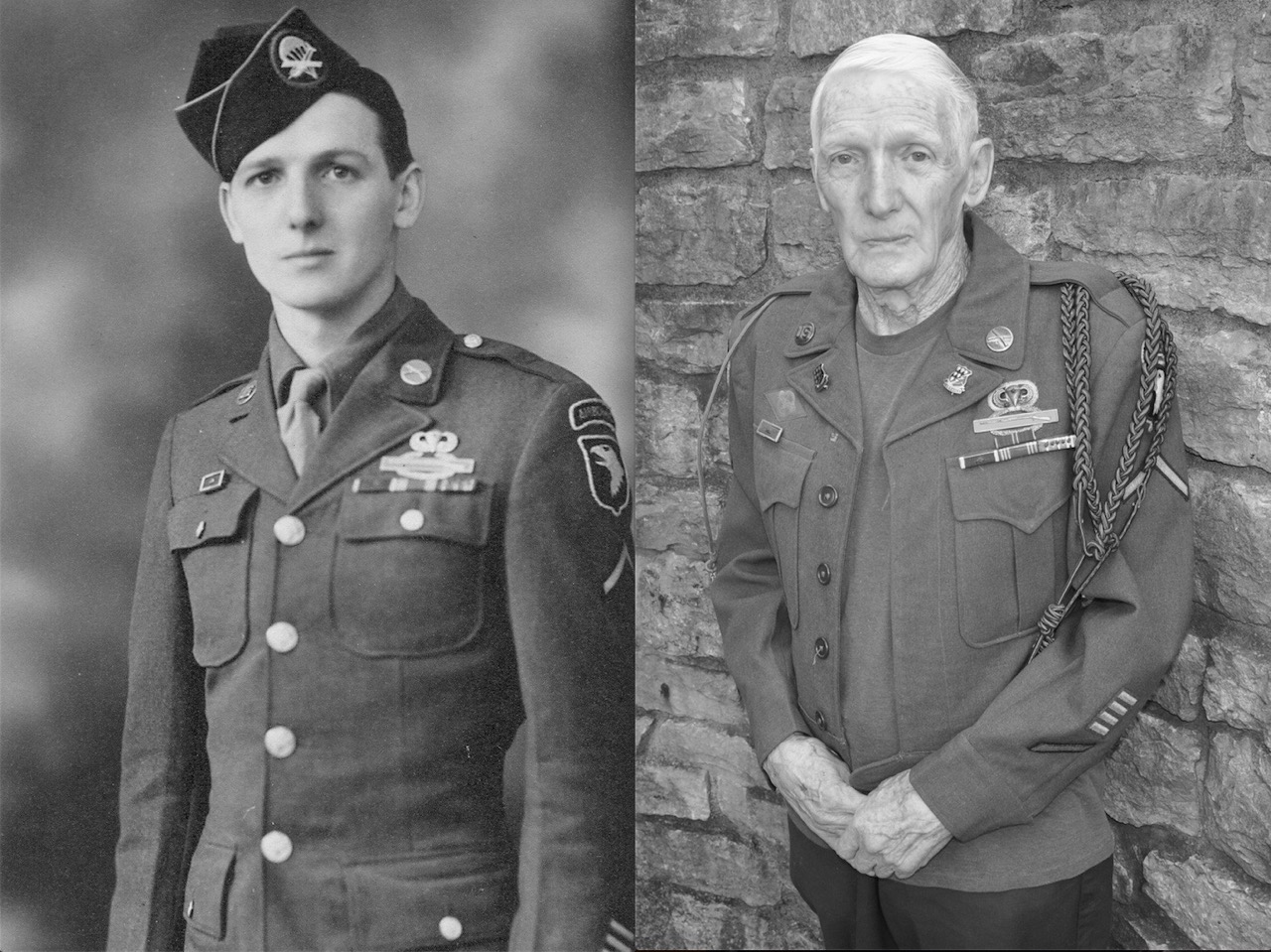 The WWII Heritage Days program provides a living history experience unique to the state of Georgia.  The event brings together historic aircraft, vintage military vehicles, antique cars, panel discussions, educational displays and demonstrations, including battles staged by war reenactors portraying Allied and Axis troops.  Another highlight of the weekend is “Keep ‘em Flying” a 1940’s-theme hangar dance featuring a 21-piece swing band where World War II veterans will be hosted as guests of honor. The CAF Dixie Wing’s fleet of WWII aircraft will be on display for the weekend. Visitors will see the Wing’s Corsair, P-51 Mustang, SBD-Dauntless dive bomber and other restored aircraft. Rides on selected aircraft can be scheduled in advance by visiting www.wwiidays.org.

Proceeds from the dance cover costs associated with hosting WWII Heritage Days, as well as the ongoing preservation of the group’s historic aircraft and “Education Through Living History”, a World War II history program made available by CAF Dixie Wing volunteers to schools and youth groups free of charge. Suggested donations for WWII Heritage Days are Adults 17 and Older $10, Children 10-17 $5.  Children 10 and under, World War II veterans, active duty military in uniform and are admitted free. WWII Heritage Days will take place rain or shine. Please no pets. Tickets for “Keep ‘em Flying” are $55 before April 25th. $65 at the door. Reserved tables and group discounts are available. All ticket sales are final. For more information, please visit www.wwiidays.org or call 678-364-1110.