Caproni Ca.100 I-ABOU flew again on Thursday, April 7, 2022, following a 16 year operational hiatus. Cesare Baj e Gerolamo Gavazzi was the lucky man at the controls for this flight, which took place on and above Lake Como amidst a magical Alpine setting in northern Italy.

This Capronicino, Italian for Little Caproni, is the oldest airworthy seaplane in the world. Considering this detail, it seems entirely apposite that the aircraft should be based with the Aero Club di Como, the world’s oldest seaplane operator. Located on the shores of Lake Como, the flying club dates its origins to 1932 when it formed to host the Squadriglia di Turismo Aereo, a unit within the Regia Aeronautica (Italian Air Force) responsible to the 1st Area Zone of Milano. This club was tasked with training paramilitary pilots and flew Caproni Ca.100 and Breda 25 seaplanes.

That being said, seaplane operations have occurred at this location since at least 1913 when the Gran Premio dei Laghi took place. This air rally saw the legendary French aviator/innovator Roland Garros compete, flying a Morane-Saulnier seaplane (note the video below with footage from this rally).

The Aero Club di Como’s current hangar sits where the base of operations for the 1913 event once lay, and remains a hive of activity to this day.

Macchi built this Ca.100 under license during the spring of 1935 at their factory in Varese. The aircraft, numero di costruzione (production number) 3992, joined the Regia Aeronautica as MM65156, with its first assignment being at the seaplane school in Pola Puntisella, then in Italy but now a part of Croatia. The aircraft later found itself operating from Idroscalo di Desenzano, the same location which hosted the famous Reparto Alta Velocità (High Speed Department) that competed for the Schneider Trophy air races. Samuele Silvano acquired the fragile-looking Ca.100 circa 1938, registering it I-ABOU. He kept the aircraft at Pavia alongside the river Po, within hangars which once housed seaplanes operating the first commercial routes in Italy from Trieste to Torino. By 1948 I-ABOU had moved to Lake Como, where it underwent refurbishment. Here the aircraft performed training and pleasure flights. In November 1951 the seaplane also took part in humanitarian missions, transporting supplies to isolated populations during the terrible river Po flood.

Gerolamo Gavazzi saved the aircraft from oblivion several decades ago, resurrecting the aircraft to airworthy condition in 1991 following a six-year effort, but a sad moment was in store for the elegant craft on July 11, 2006. After several passenger flights, I-ABOU was taxiing for its final scheduled takeoff for the day when it collided with a Cessna which was returning to the seaplane ramp. Nobody was injured, thankfully, but the Ca.100 capsized, sadly. Unstoppable, Gavazzi decided to rebuild the aircraft once more, although it was a long and tortuous process. Gavazzi sent the Capronicino’s Colombo S.63 engine to the UK for repairs, but it was almost fifteen years before he could reinstall the powerplant installed on the restored airframe. Finally, in September 2021, the Ca.100 was again ready for flight. Thanks to Gerolamo Gavazzi’ immense dedication and commitment, I-ABOU regained her crown as the world’s oldest airworthy seaplane.

Many thanks to Ugo Vicenzi and Paolo Montonati for their support in drafting this article. Issue #95 of Warbird Digest magazine features the Capronino seaplane’s full story, along with that for an equally rare Ca.100 land plane which Gerolamo Gavazzi also restored – it’s well worth a read! 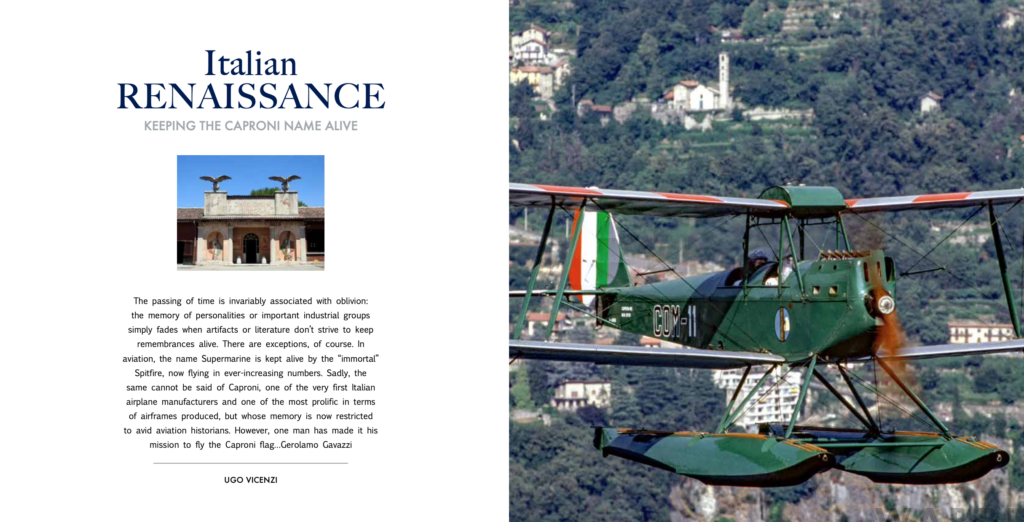