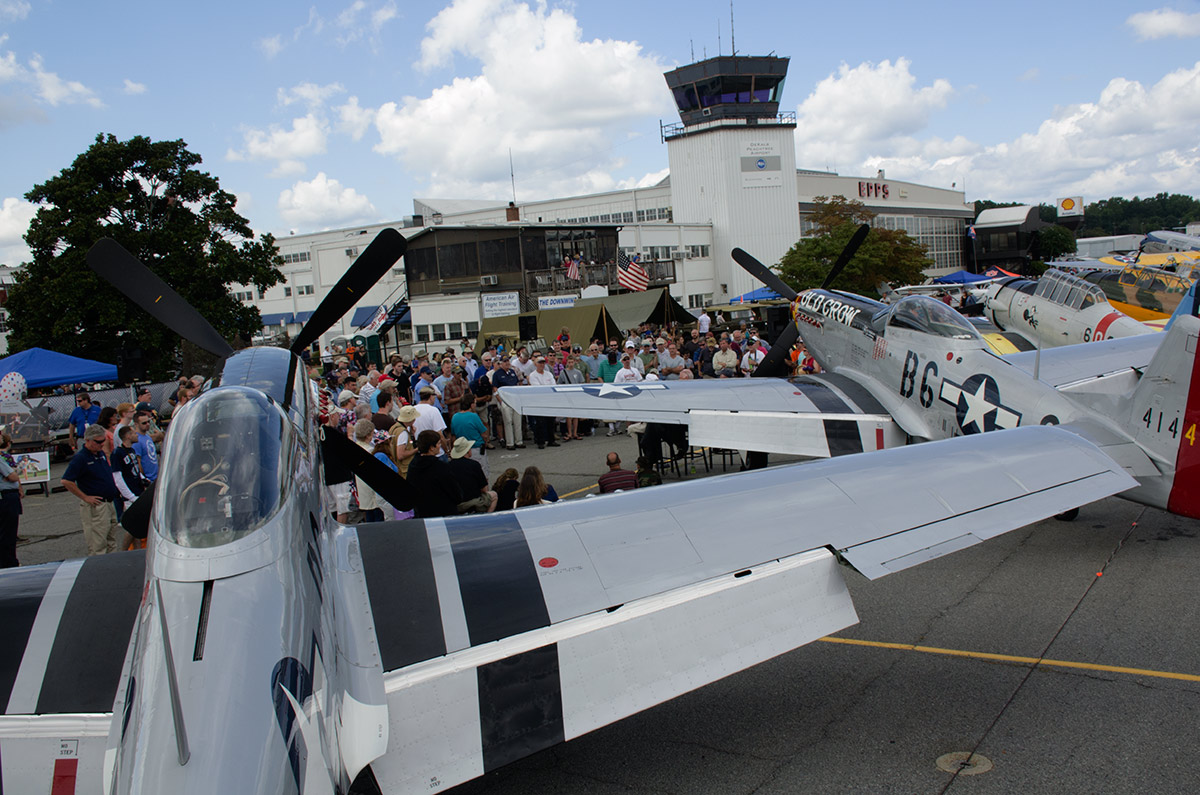 More than 12,000 aviation fans and family members filled the tarmac at the Commemorative Air Force Dixie Wing’s second annual Atlanta Warbird Weekend, Sept. 12-13 at Dekalb-Peachtree Airport.  Guests toured A DC-3, a B-17, “Memphis Belle,” and viewed 33 WWII warbirds brought in for the occasion. They were able to see a fleet of five P-51 Mustangs, a British Royal Air Force Hurricane and other famous WWII aircraft.  The air buzzed with landings and take-offs all weekend as more than 50 happy passengers enjoyed rides in the Dixie Wing’s WWII warbirds.WWII veterans and other pilots attracted large crowds as they discussed their experiences and their warbirds at a series of “Warbirds in Review” sessions in front of various aircraft. More than 37 veterans attended as honored guests. WWII pilot and triple ace Bud Anderson, 93, attended Atlanta Warbird Weekend and recounted his experiences to a sold-out crowd for “Dinner with an Ace,” at the 57th Fighter Group restaurant.

Families enjoyed activities provided by 16 vendors and presenters, including Zoo Atlanta, Atlanta History Center and the Museum of Aviation History in Macon. The Dixie Wing PX sold out of most of its inventory, and Dixie Wing authentic bomber gun turrets drew crowds of interested children and families.  Six USAF T-6B aircraft and pilots changed plans and dropped in for the weekend, and 30 photographers attended an aviation workshop with special access to the vintage aircraft and twilight scenes.

Connie Bowlin, founder of EAA Warbirds of America, a Georgia Aviation Hall of Fame inductee (2009), and a Gathering of Eagles inductee said the Dixie Wing organizers “ and all the other volunteers can be proud of a great weekend.”

“This is a great event, well done Dixie Wing,” said Pat Epps, head of Epps Aviation and an inductee of the Georgia Aviation Hall of Fame (2011) and the Gathering of Eagles.

“It was gratifying to see so many people turn out for the remembrance and celebration of the men, women and machines of the Greatest Generation,” said Jay Bess, program coordinator. “Some came from as far away as Texas to be part of this weekend.  AWW brings together organizations, aircraft and people to keep this history alive and preserve the spirit of America’s shared past. We appreciate the many sponsors that helped make this weekend a success, including MetLife, Epps Aviation, Discover Dekalb, City of Brookhaven, PDK Airport, Atlantic Aviation, Yancey Cat, TSS Towers and Honk Kong Mall. With such strong support, we are already looking forward to an exciting event next year.”