PRESSES RELEASE- For nearly 60 years, the Commemorative Air Force (CAF) has worked to preserve and honor American military aviation history. The organization’s success can only be attributed to its dedicated volunteer-members, called Colonels, who have been the foundation and the driving force to keep the organization’s mission and aircraft going strong since 1957.

On March 1, 2014, the CAF recognized two long-time members who made significant contributions to the organization’s success at the CAF Hall of Fame Banquet. CAF Colonels Ted Short of North Richland Hills, Texas, and George W. Lodge of McKinney, Texas, were the fifth class to be inducted into the CAF Hall of Fame.

“The CAF is one of aviation’s most impactful organizations,” said Stephan C. Brown, CAF President/CEO. “Our members reach tens of thousands of people each year through our touring aircraft and airshows reminding our audiences of the tremendous sacrifices made by the ‘Greatest Generation’ to preserve our freedom. Throughout the history of the CAF, there have been those who have made an incredible commitment to the success of the organization. Ted Short and George W. Lodge are deserving of this honor.”

Colonel George W. Lodge has been a member of the CAF since 1986 and served on the CAF Board of Directors during a crucial time in the organization’s history which included the CAF name change in 2000. In addition, he served on the CAF Airpower Museum and Foundation Boards of Directors and has supported numerous CAF Units. His fundraising efforts helped the Dallas-Fort Worth Wing pay off its hangar mortgage in 1977, and he is a founding member of the Swiss Wing.

Prior to his service with the CAF, Lodge served in the U.S. Army as a Battalion Communications Officer in West Germany during the Cold War. Lodge attributes his 40-year career in publishing with NEWSWEEK and American Way, to the skills he acquired as an Eagle Scout. 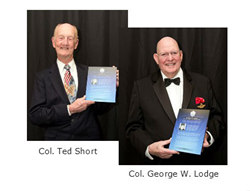 Colonel Ted Short served on the CAF’s General Staff for six years, serving during a time of financial challenges for the organization. Short was a member of the committee that recommended Stephan Brown for the President/CEO role in 2008. He and his wife, Sharon, were instrumental in forming the “O’Club” in Midland. Aside from his leadership roles within CAF, Short has been intimately involved in the operation and support of the CAF’s SB2C “Helldiver.” The SB2C is the only flying example left in the world and Short has spent countless hours sharing the airplane’s story at air shows and events around the country.

The CAF Hall of Fame banquet is the highlight of the annual Wing Staff Conference, which is attended by representatives from the CAF’s many units spread throughout the country. More than 200 people attended the conference and banquet. The weekend’s events were supported in part by the Odessa and Midland Convention and Visitors Bureaus.

The CAF Hall of Fame was established in 2010 to honor members who have made monumental contributions towards the success and worldwide impact that the CAF enjoys today. The list of past inductees is available from the CAF’s web site by clicking on the “Hall of Fame” link.

In 1957, a small group of ex-service pilots pooled their money to purchase a P-51 “Mustang,” beginning what is now called the Commemorative Air Force (CAF). With the addition of a pair of F8F Bearcats, the CAF became the founders of the Warbird Movement, an effort to preserve and honor our military history with the rallying cry to “Keep ‘Em Flying!” Now, more than 55 years later, the CAF is the premier Warbird organization, operating 160 vintage aircraft in Honor of American Military Aviation. A non-profit educational association, the CAF has more than 10,000 members and its fleet of historic aircraft is distributed to 73 units located in 28 states for care and operation. For more information, visit http://www.commemorativeairforce.org or call (432) 563-1000.