It has been almost four years since our last update on restoration progress with the Commemorative Air Force Lake Superior Squadron’s Consolidated PBY-6A Bu.64097. The unit also maintains PBY-6A Bu.64092 in static condition.

Over the years, the Commemorative Air Force has owned and operated five different PBY Catalinas, but the type has not enjoyed much longevity with the organization so far sadly. They lost their first example, PBY-6A Bu.64000, in a crash during 1975, while PBY-5A Bu.46590 succumbed to corrosion in 1984 (since parted out). Another, PBY-6A Bu.63998, suffered an accident in 1986, which also ended its flying days, and a freak storm flipped PBY-6A Bu.64097 on her back in May, 1998. Her replacement, PBY-6A Bu.64092, flew for a few years while still in its firebomber configuration, but corrosion grounded her as well.

However, the CAF never gave up on the Catalina, which played such crucial roles in WWII, from long-range reconnaissance and U-boat suppression, to Air Sea Rescue and other vital activities. The Lake Superior Squadron, now based in Superior, Wisconsin, is performing radical surgery on Bu.64097, something likely never before attempted outside of military services. They are rebuilding the damaged, but relatively corrosion-free fuselage of Bu.64097 and replacing her storm-crumpled wings with those from Bu.64092. It is a massive undertaking, but the team has made remarkable progress since the project began in 2009. They have already grafted the two aircraft together and are well on the way to forming one airworthy airframe. While incorporating the souls of two different airframes, the combined structure will retain the identity of Bu.64097, since her fuselage emanates from that example. 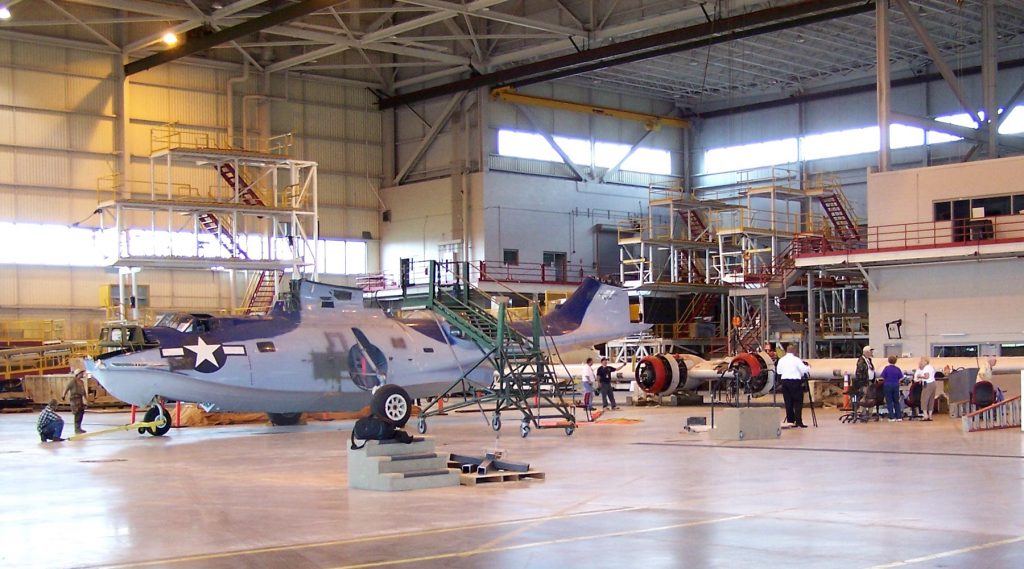 The Lake Superior Squadron has not had an easy ride in this endeavor, as soon after they completed a highly successful 12 Planes of Christmas fundraising campaign for ’097 in 2017, the unit received the unwelcome notice that they would have to leave Hangar 101,their long-time home in Duluth, Minnesota. Damage received from high winds in a storm a year earlier had rendered the building structurally unsound , and building inspectors condemned it. So, obviously, the Squadron had to quickly divert their efforts into finding a new base of operations. After a lengthy search, they found an empty hangar at Richard I. Bong Airport in nearby Superior, Wisconsin. While the new hangar was much smaller than the one in Duluth, and couldn’t hold a third of the Squadron’s museum displays, it was nearby enough to allow the unit’s volunteers to keep working on the PBY. While the Squadron’s aircraft display items are on view in the new hangar they moved their historical artifacts to a museum space in downtown Superior. 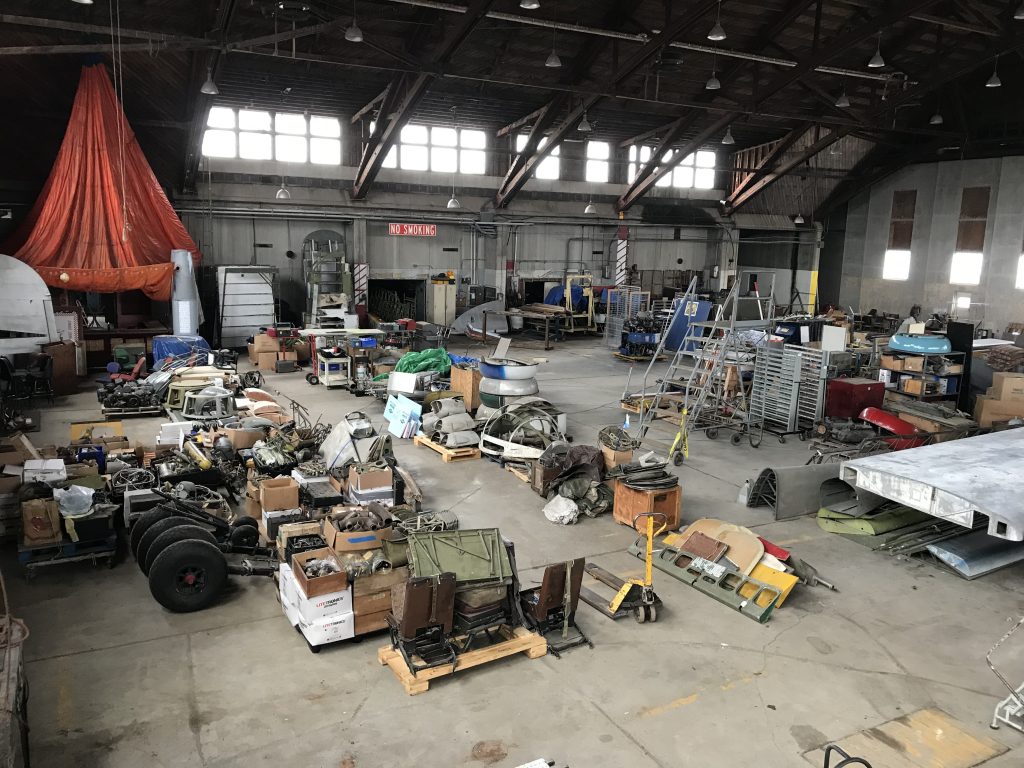 Once the contracts for the new location were finalized, the hard work began in packing up two PBY’s and a large museum, along with two decades worth of collected parts, tools, and equipment. The Squadron disassembled their PBYs and rented yacht trailers to move the two flying boats. They packed and loaded hundreds of other items into various trailers for the 15 mile move to Bong Airport, completing the exercise in November of 2018. Even so, the hard work of adapting to the Squadron’s new home continued well into 2019. The significantly reduced available hangar space meant that the Squadron had to repack, reorganize, and, in some cases, sell off many items in order to work within their new confines. Furthermore, they needed a heated maintenance room. And finally, the ongoing work with architectural engineers, contractors, and inspectors began in the effort to design new hangar doors for the 80-year-old building. 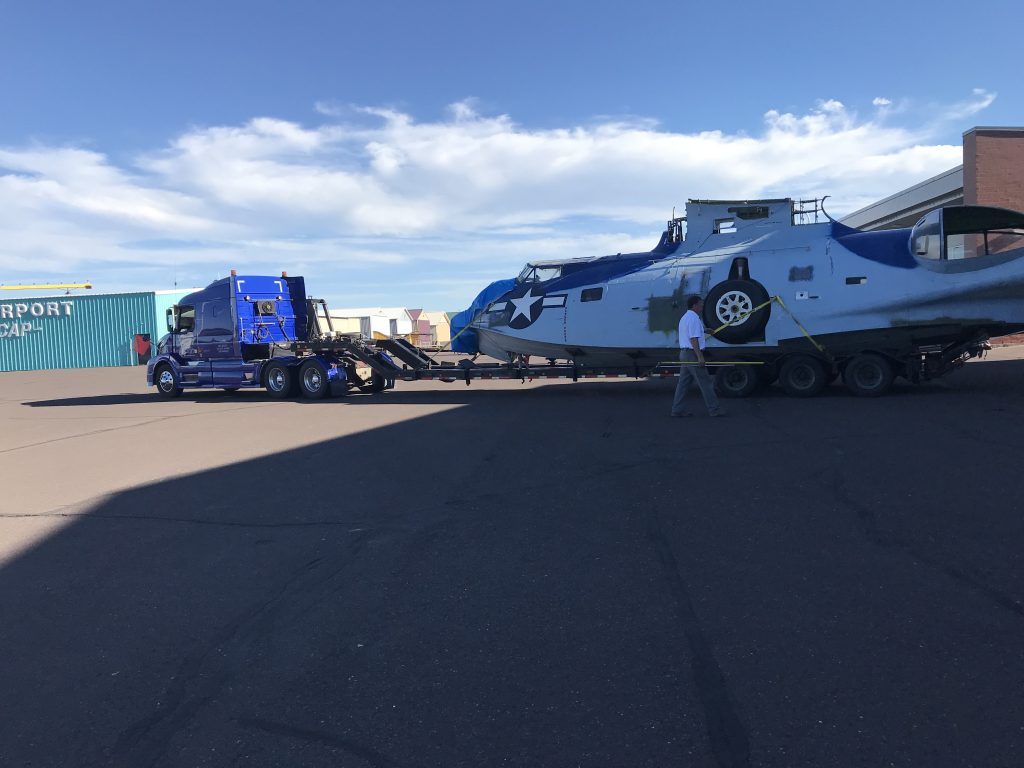 Obviously, this intense and lengthy effort in moving homes significantly affected available resources in both time and money for the PBY restoration. Indeed, disassembling the Catalina must have felt like a big step backwards at the time, but in some ways this was a benefit, as it provided the restoration crew with the opportunity to review the aircraft’s health. And this paid dividends because the closer scrutiny of some disassembled sections revealed that they required a more in-depth restoration. Work resumed slowly in 2019. By summer’s end, the PBY was tented and the heated shop was also in working order. Both facilities were in use throughout the winter. This winter work included media-blasting the PBY’s interior, as well as wrapping up the fabric for two more wing trailing sections. 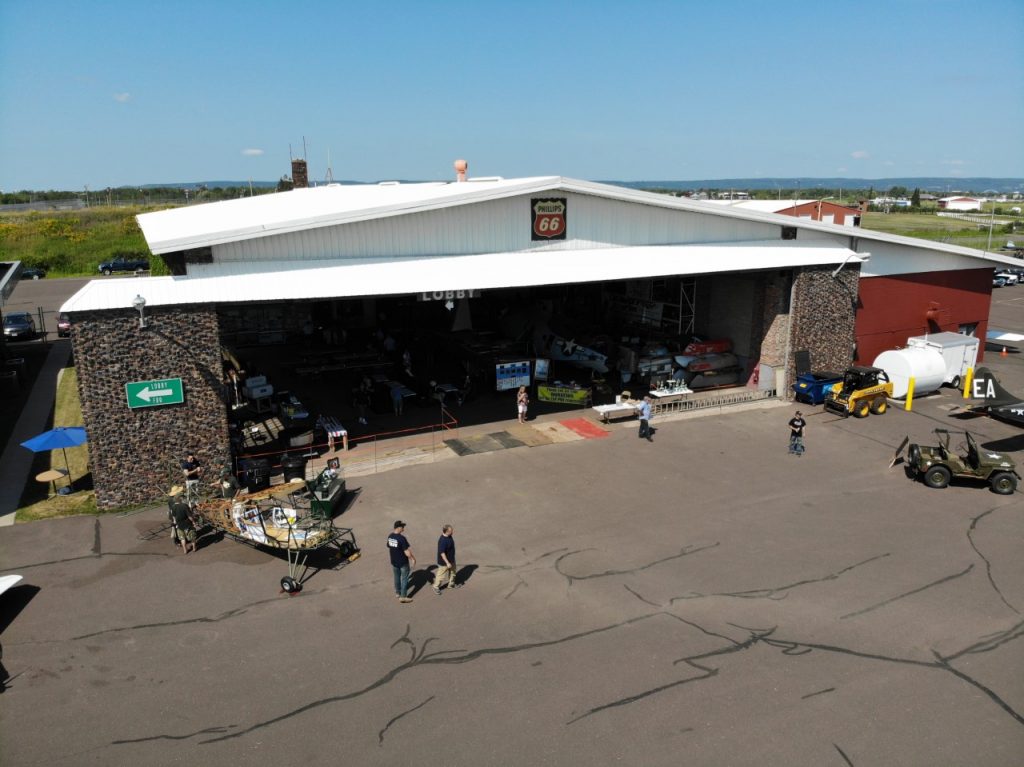 The previous year’s hard work began to pay off in 2020. When spring finally arrived, the Lake Superior Squadron was busy disassembling the wing’s center section for cleanup and inspection. Work began to repair sections on the fuselage’s right side, and these endeavors were nearly completed by the time these words were written. A significant accomplishment was the remanufacture of a keel “Y” cap located in the fuselage at Station 7. This effort required a highly-skilled craftsman, and the Squadron was lucky to have a volunteer with the requisite skills; over 20 years of experience in metal fabrication. He is just one of the more than 35 volunteers who have donated a cumulative 4,500+ hours of free time to the Lake Superior Squadron this year. 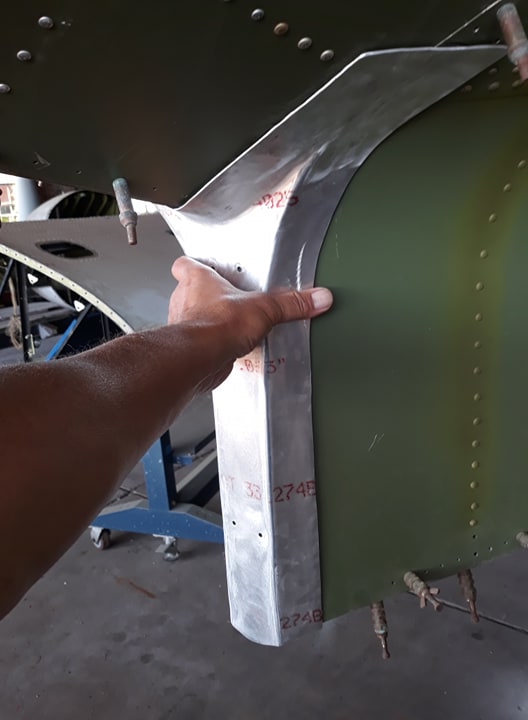 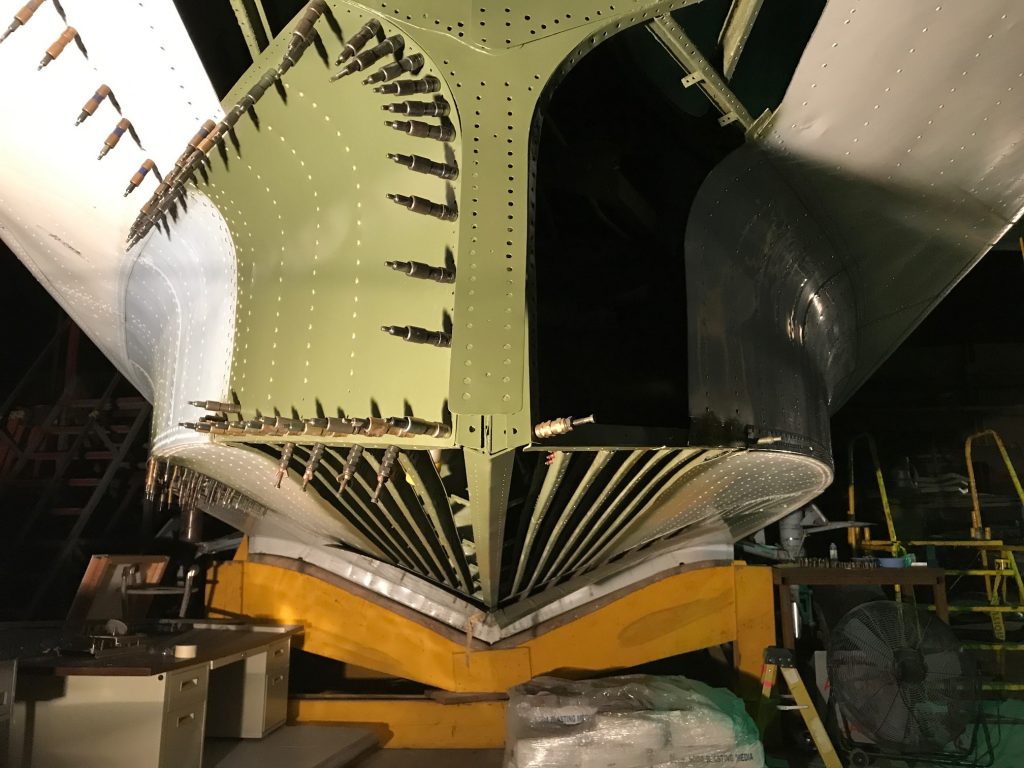 Currently, the PBY is under cover inside the hangar for the winter. Tenting is set up to allow the unit to heat the the fuselage from the side blisters on forwards. Unfortunately the new hangar does not have any doors to protect the interior against the winter elements. The CAF-LSS is currently raising funds to purchase new doors, click HERE. During the restoration’s next phase, the Squadron plans to continue refurbishing the left side of the fuselage, to work on the front wheel compartment, and install a bow turret. On an interesting side note, the Squadron intends to model their Catalina after Howard Ady’s historic PBY from the Battle of Midway. As part of this plan, the Squadron is installing the earlier, flat bow turret instead of the eyeball turret that came standard on the later PBY-6A models. 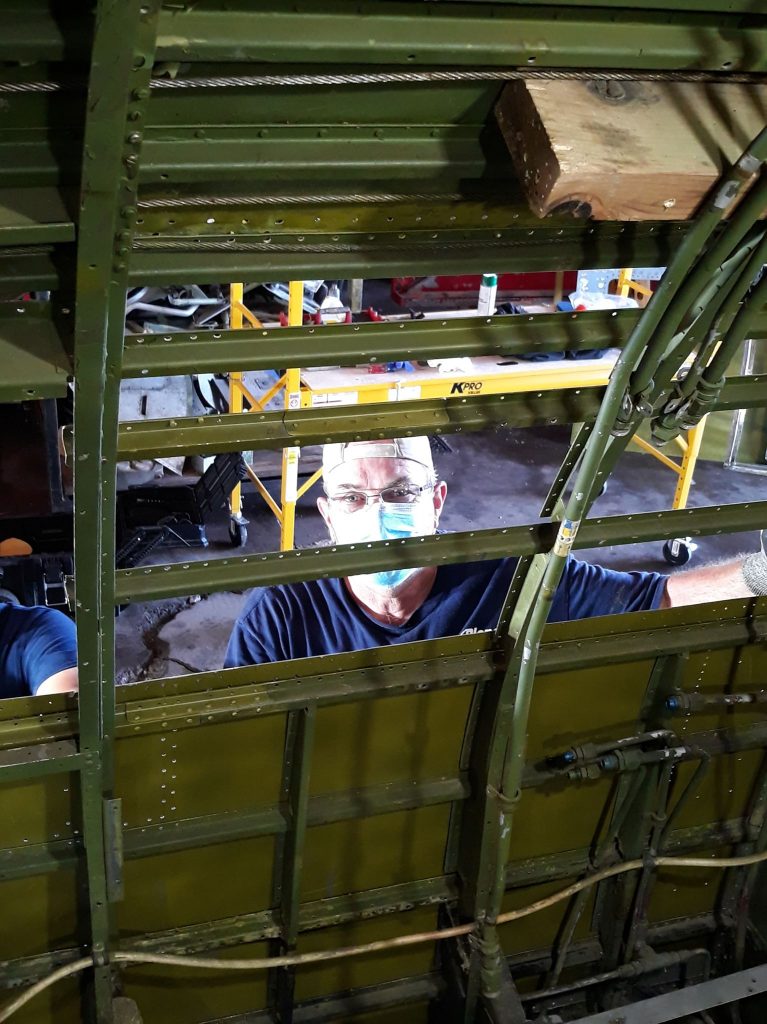 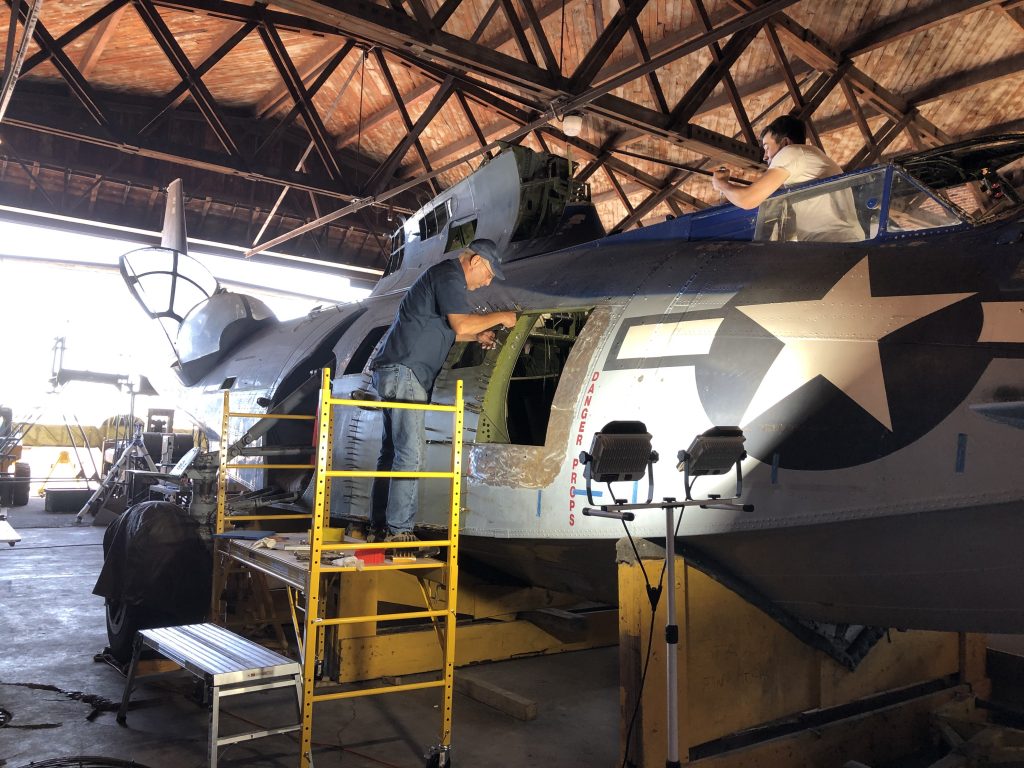 Obviously, the move to their new location was a tough blow, delaying the restoration by a number of years. However, with a lot of hard work coming from some extremely dedicated people, the CAF Lake Superior Squadron is happy to say that they are overcoming their adversities, and extremely excited about the new direction and future of the PBY Restoration project.

To support the unit and its restoration of their PBY Catalina, click HERE.