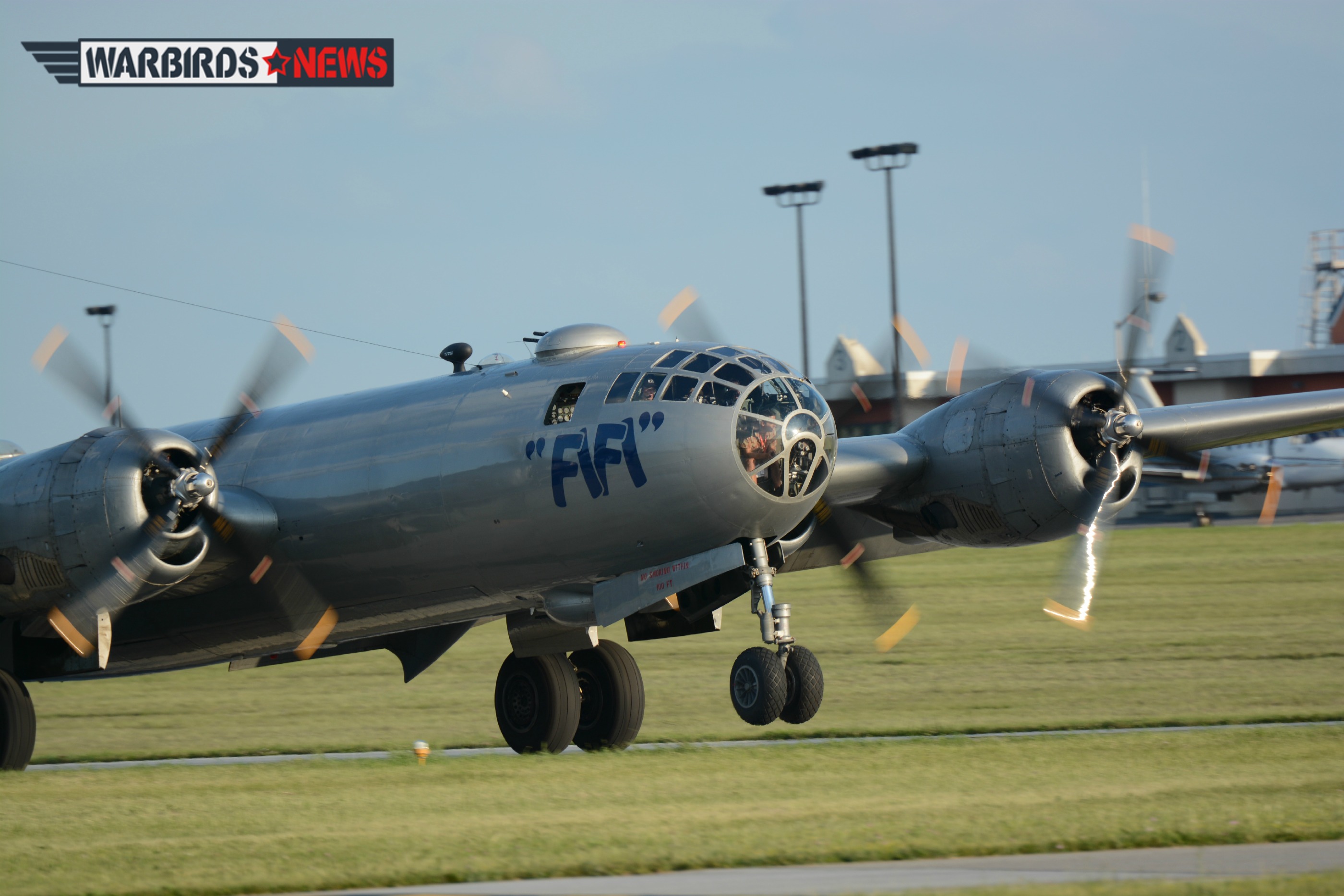 PRESS RELEASE -DALLAS – April 6, 2015 — The Commemorative Air Force AirPower History Tour, featuring the iconic Boeing B-29 Superfortress FIFI, will visit airports in eastern and Midwest United States this summer. The season starts May 8 in Manassas, Virginia where the B-29 Superfortress and B-24 Liberator will be two of many Commemorative Air Force (CAF) airplanes flying in the Arsenal of Democracy Flyover in Washington, D.C. The CAF will have the largest number of participating aircraft at the event which commemorates the 70th anniversary of VE day – the day the Allies declared victory in Europe during World War II. (More information about this event can be found at www.WW2flyover.org.) Following the VE Day flyover the B-29 and B-24 will visit Baltimore, MD; Farmingdale, NY; Morristown, NJ; and Reading, PA. Other aircraft traveling with the tour include the SB2C Helldiver, P-51 Mustang, and C-45 Expeditor. The B-24 returns home to Texas after Reading, but the B-29 and other touring aircraft will continue on to Binghamton, Rochester and Albany in New York; Nashua, NH; and Hartford, CT before a short maintenance break in Lexington, KY. The complete list of summer tour stops includes:

The Boeing B-29 Superfortress, first flown in 1942, began active service in 1944 and is perhaps best known as the aircraft whose missions over Japan helped bring about the end of World War II. It was designed as a replacement for the older B-17s and B-24s, with longer range and greater bomb loads. The B-29 was also used in the Korean War in the early 1950s and was a staple of the U.S. Air Force until the late 1950s.The year 2015 marks FIFI’s 41st year of flight with the Commemorative Air Force. The airplane, rescued and restored by the CAF in the early 1970s, is a regular feature at airports and airshows all across the country. In fact, the B-29 Squadron of the CAF was the first group to begin touring historic war birds in 1974. Now, 41 years later, FIFI still barnstorms the country from coast to coast bringing the sights, sounds and smells of World War II aviation history to audiences across the United States.Visitors pay a nominal admission fee at the gate at most tour stops. All of the airplanes will be on static display when they are not flying. B-29 cockpit tours are included in the admission price and rides are available in most of the airplanes. Ride prices range from $75 to $1895. Ride reservations may be made at www.AirPowerTour.org where additional information about each tour stop can also be found.

About the CAF’s B-29 Superfortress, FIFI:
FIFI was acquired by the CAF in the early 1970s when a group of CAF members found her at the U.S. Navy Proving Ground at China Lake, California where she was being used as a missile target. The airplane was rescued and restored and flew for over thirty years until 2006 when the chief pilot made the decision to ground her pending a complete power plant re-fit. What followed was an extensive four year restoration that included replacing all four engines with new custom built hybrid engines. FIFI returned to the sky in 2010 and since that time has traveled coast to coast attracting large crowds at every tour stop. Learn more about FIFI and her tour schedule at www.AirPowerTour.org.

About the CAF’s B-24 Liberator Diamond Lil:
Diamond Lil, built in 1941, was the 25th B-24 produced by Consolidated Aircraft Corporation. It is the oldest remaining B-24. Out of the over 18,000 produced, this airplane is one of only two still flying today. The CAF purchased this B-24A in 1967 and she has performed majestically before thousands of people for over 40 years. Originally configured as Diamond Lil, a transport aircraft, with markings of the 98th Bomb Group, she underwent a major restoration in 2006 with the intent of returning her back to the original bomber configuration and renamed Ol’ 927. In the winter of 2011-2012 the Squadron voted to return the name Diamond Lil to the aircraft with newly updated nose art. The airplane is maintained and operated by the volunteers of the Commemorative Air Force’s B-29/B-24 Squadron and is based at the new CAF National Air Base at Dallas Executive Airport.

About the C-45 Expeditor:
The C-45 is a military transport version of the Beechcraft Model 18, which began its 32 year production lifespan in 1937. It was the result of Walter Beech’s desire in 1935 to build a low-wing monoplane to compete with the commercial biplanes of the day, like the Curtis Condor. The C-45 was first ordered by the U.S. Army Air Corps for use as a staff transport. It was continually modified throughout its production life with changes like increased seating capacity and a longer nose. A navigator training version was put in service as the AT-7, and a float-version was designated the AT-7A. The Model 18 was further modified during 1941 as the advanced trainer AT-11, equipped with a small bomb bay, transparent nose section, and two .30 cal. machine guns. This variant was used for bombardier and gunnery training. A photo reconnaissance model, designated the F-2, was the final wartime variant of the Model 18 The U.S. Navy and Marine Corps also acquired more than 1500 Model 18s during World War II, with respective identifiers of JRB and SNB.

About the Commemorative Air Force:
The Commemorative Air Force honors the men and women who built, maintained and flew in these airplanes during World War II. The organization believes that is best accomplished by maintaining the airplanes in flying condition; taking the airplanes to the people allowing them to experience the sight and sound of the aircraft in flight.Collecting, restoring and flying vintage historical aircraft for more than half a century, the Commemorative Air Force ranks as one of the largest private air forces in the world. The CAF is dedicated to Honoring American Military Aviation through flight, exhibition and remembrance. A non-profit educational association, the CAF has more than 11,000 members and a fleet of over 150 airplanes distributed throughout the country to 67 units located in 25 states for care and operation. For more information, visit www.commemorativeairforce.org.