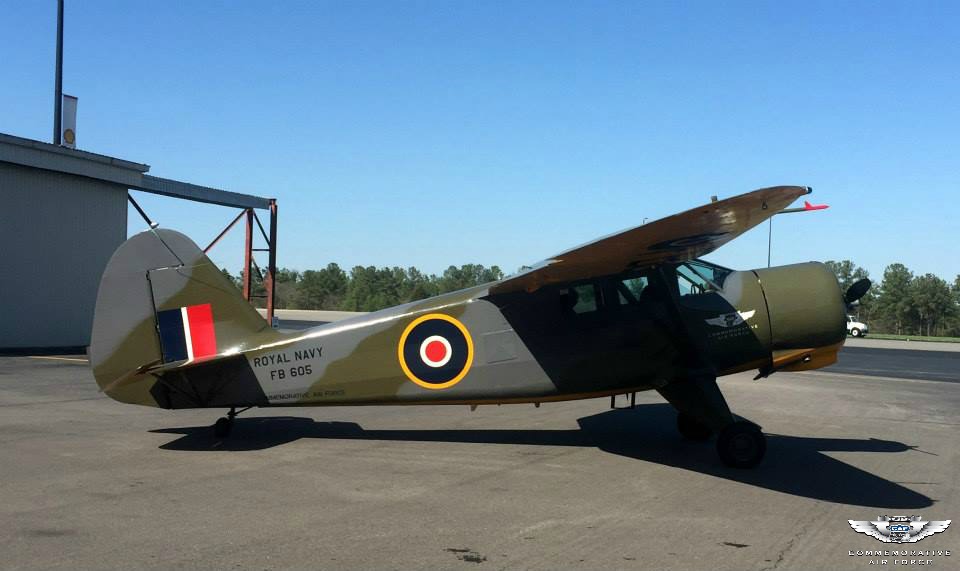 The Commemorative Air Force’s Coyote Squadron in Corsicana, Texas has recently added a former Royal Navy Stinson Reliant Mk.I to its small fleet, having acquired it from another CAF squadron in North Carolina. The aircraft, bearing its original Royal Navy serial number, FB605 is essentially an uprated version of the Stinson AT-19/UC-81 which served in the US military during the war, and itself a derivative of the civilian Stinson Reliant. Stinson’s factory in Detroit, Michigan built 500 of them exclusively for the Royal Navy under the Lend-Lease program. The type served in many roles from liaison to reconnaissance. According to the CAF, FB605 made many trips over the English Channel to look for German U-Boats. By November, 1944, FB605 was in Ceylon (now Sri Lanka) as part of the Ferry Flight at the Royal Navy Aircraft Repair Yard in Coimbatore. As part of the terms of Lend-Lease, the assets had to be paid for or returned to the USA upon the cessation of hostilities. Therefore, following the end of WWII, FB605 and 414 other surviving examples returned to the USA, arriving by aircraft carrier in Norfolk, Virginia in February, 1946. FB605 then became Bu.No.11607 with the US Navy, but never saw active service. Instead the War Assets Administration put her up for disposal for the princely sum of $2,000 – quite a significant price considering that you could buy a P-51 Mustang for less. Interestingly, no one would buy the aircraft as “war surplus” as the AT-19 had never received civilian certification. However, Consolidated Vultee recognized a quick profit to be had, buying up as many of the Reliants as it could, and re-certifying them as the V-77 Reliant. Essentially all this entailed was the removal of all military equipment, a quick tidy-up, and a repaint. Vultee issued all the V-77s with new log books and a 1946 manufacture date.

FB605 has had a busy civilian life, traveling from the US East Coast to the West, and then gradually working her way east again via new owners in Mississippi, Ohio, Michigan and eventually North Carolian. She joined the Confederate Air Force as-was in 1985, stationed with a CAF unit in Pinehurst, North Carolina. On April 1st, CAF Colonel’s Bobby Grantham and Dan Summerall flew the aircraft to her new home with the Coyote Squadron in Corsicana, Texas just in time for her to take part in the Corsicana Airsho 2015, which will take place on Saturday, May 9th over C. David Campbell Field at the Corsicana Municipal Airport.