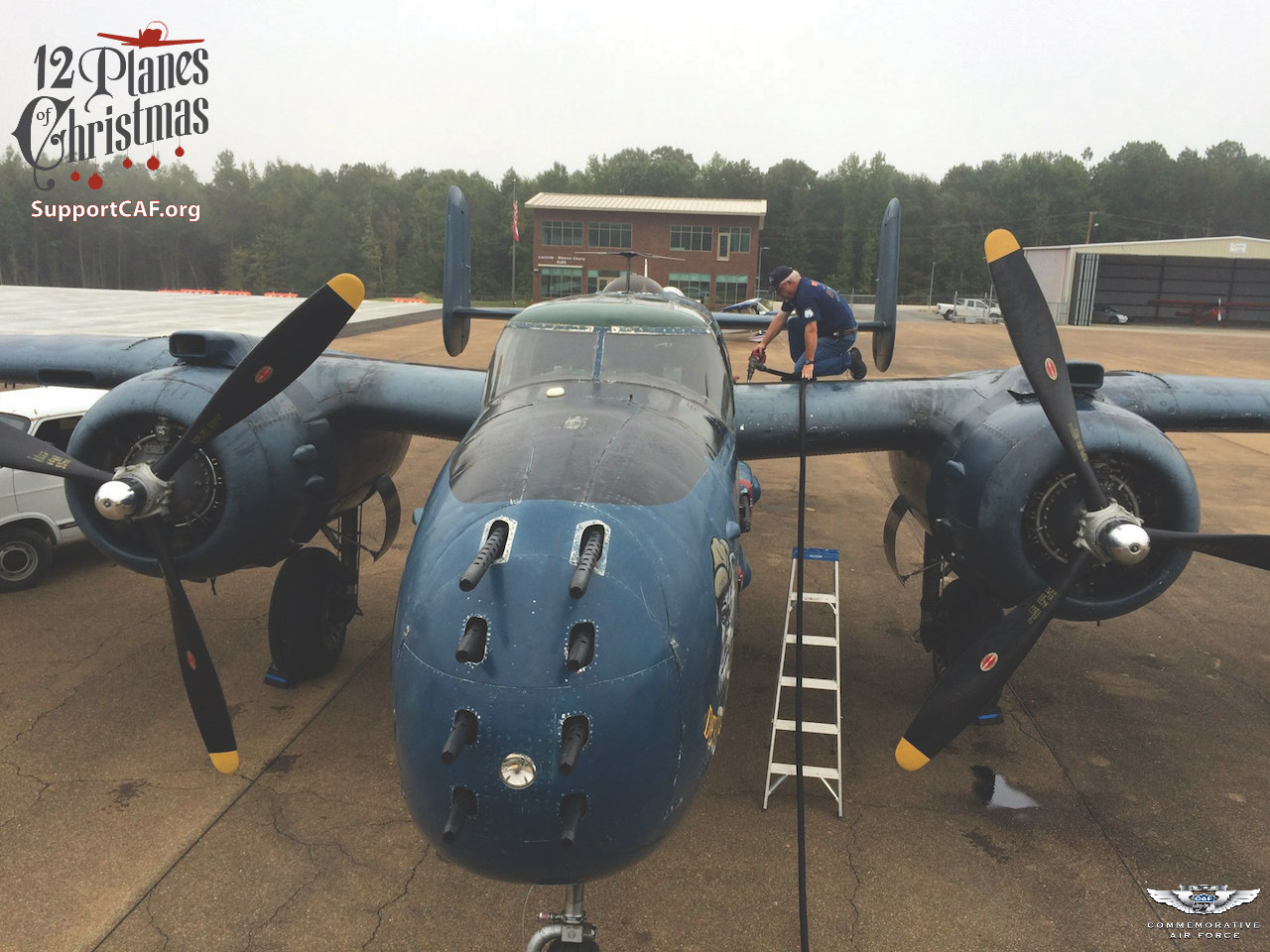 As part of WarbirdsNews support for the Commemorative Air Force’s fund-raising campaign ’12 Planes of Christmas’ we will be highlighting each of the aircraft on their list. The fifth of these is the North American B-25J Mitchell flown by the CAF’s Devil Dog Squadron as a US Marine Corps PBJ-1 variant nicknamed ‘Devil Dog’.

‘Devil Dog’ is one of the most active aircraft in the CAF fleet, and one of the busiest B-25s in the world. A downside to all of that flying is that the airplane’s exterior paint has become badly worn and must be replaced so the PBJ can continue flying in blue as a tribute to Marine Corps aviation in World War II.

Not many people know that the US Marine Corps flew bombers in WWII. One of the missions of the Devil Dog Squadron is to keep that piece of history alive. PBJs came about by chance. In 1943, North American, the B-25’s manufacturer, produced more B-25s than the Army Air Corp could use. Approximately 800 of the airplanes were offered to the US Navy. Although the famous Doolittle Raid was a successful carrier launched formation of B-25s, the Navy had little use for the extra airplanes. They were too large for regular carrier duty. The US Marine Corps, however, was looking for a medium bomber. They agreed to take the B-25s and use them for “night heckling”, anti-shipping missions or close air support of beachheads and landings. Taking the unwanted equipment was nothing new for the Marines; they often received obsolete or surplus equipment from the Army or Navy. The Marines re-designated their B-25 Mitchell variant as the PBJ-1. PB indicates Patrol Bomber and J is the code designating manufacturer, North American Aviation. The Marines were innovative in customizing the PBJs for the jobs they faced, adding a wing-mounted airborne radar for night-time shipping interdiction. As most of the missions were low altitude attacks, there was not much need for the glass nose/bombardier position which the Marines replaced with a solid nose armed with up to 8 – .50 caliber machine guns. Some versions included a 75mm cannon, like the B-25G and H models. Nine PBJ squadrons made it overseas before the war ended in the Pacific. The Marine Corps lost 26 PBJs in combat and 19 in operational accidents while in a combat zone. 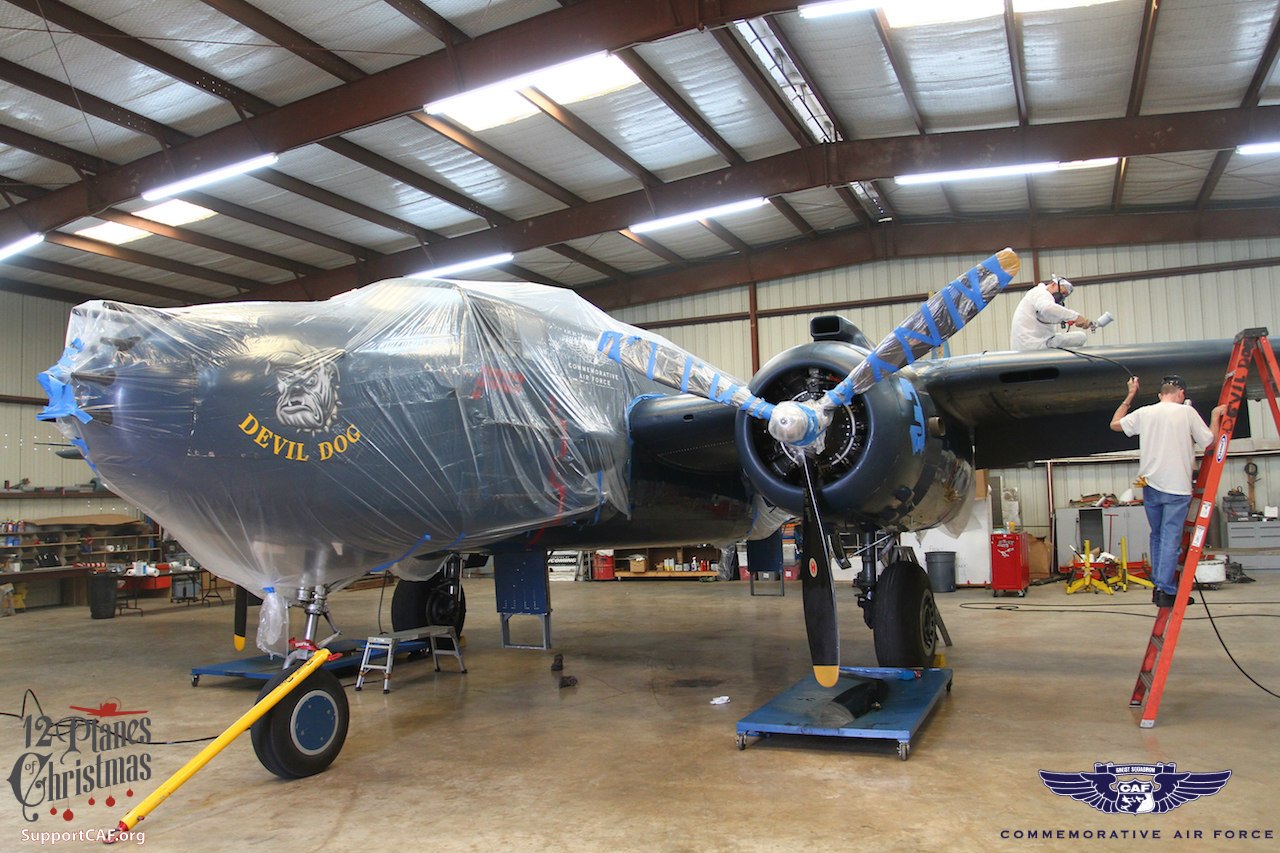 Support This Aircraft
Devil Dog flew 66.5 hours last year and its continued operation is funded largely through T-shirt sales. This successful business model also allowed the squadron to recently purchase a spare engine. Devil Dog attends an average of 20 air shows a year, educating and inspiring hundreds of thousands of people. Her paint scheme is now very worn and tired, and if Devil Dog is to continue as a fitting tribute to the brave Marine Corps airmen who fought in the South Pacific, the squadron must raise $100,000 to properly strip, prime and repaint the airplane in its characteristic blue PBJ scheme. Devil Dog will continue to participate in air shows and commemorative events across the nation. The Devil Dog crew is devoted to its mission, so much so that in 2015, crewmembers paid their own way to attend the Arsenal of Democracy WWII Victory Capitol Flyover in Washington, D.C.

About This Unit
The Devil Dog Squadron is a volunteer organization of the Commemorative Air Force, dedicated to flying, maintaining and preserving a WWII B-25 bomber, nicknamed ‘Devil Dog’. ‘Devil Dog’ represents a US Marine Corps version of the B-25 known as the PBJ-1. The Devil Dog Squadron encourages everyone to explore their website to learn more about PBJs, the Squadron and the Commemorative Air Force.