On October 1, 1947, after three years of development in which 801,386 engineering hours and 340,594 drafting hours had been expended, the first prototype North American Aviation XP-86 (company designation NA-140), serial number 45-59597, was ready for its first flight at Muroc Dry Lake in the high desert, north of Los Angeles, California.

Completed at North American’s Inglewood plant on 8 August 1947, it was trucked to Muroc in mid-September. It was reassembled, everything was checked out, and after a few taxi tests, company test pilot George S. Welch took off for an initial familiarization flight. Chief Test Pilot Bob Chilton flew chase in an XP-82 Twin Mustang with a company photographer on board. The duration of the first flight was 1 hour and 18 minutes.

During this first flight, George Welch climbed to 35,000 feet (10,668 meters): “In a little more than ten minutes he had reached 35,000 feet. Leveling out, the test pilot smiled as he watched the indicated airspeed accelerate to 320 knots. He estimated that should be 0.90 Mach number. . . Rolling into a 40-degree dive, he turned west. . . The airspeed indicator seemed to be stuck at about 350 knots. The Sabre was behaving just fine. Then at 29,000 feet, there was a little wing roll. Correcting the roll, George pushed into a steeper dive. The airspeed indicator suddenly jumped to 410 knots and continued to rise. At 25,000 feet, he pulled the Sabre into level flight and reduced power. The wing rocked again and the airspeed jumped back to 390.” —Aces Wild: The Race for Mach 1, by Al Blackburn, Scholarly Resources Inc., Wilmington, Delaware, 1998, at Chapter 5, Pages 144–145.

George Welch was the first to report instrument readings that would be referred to as “Mach jump.” It has been argued that George Welch flew the XP-86 beyond Mach 1 during this flight, breaking the “sound barrier” two weeks before Chuck Yeager did with the Bell X-1 rocketplane. During flight testing, it was firmly established that the XP-86 could reach Mach 1.02–1.04 in a dive, so it is certainly possible that he did so on the Sabre’s first flight.

The XP-86 was unlike any airplane before it. It was the first airplane with a swept wing. After analyzing test data from the Messerschmitt Me 262, North American’s engineers designed a wing with a 35° degree sweepback to its leading edge. The wing tapered toward the tips, and its thickness also decreased from the root to the tip. In order to create a very strong but very thin wing, it was built with a two-layered aluminum skin, instead of ribs and spars, with each layer separated by “hat” sections. The wing sweep allowed high-speed shock waves to form without stalling the entire wing.

The wing also incorporated leading edge “slats” which were airfoil sections that automatically extended below 290 knots, smoothing the airflow over the wing’s upper surface and creating more lift at slow speeds. Above that speed, aerodynamic forces closed the slats, decreasing drag and allowing for higher speeds. Effectively, the wing could change its shape in flight. 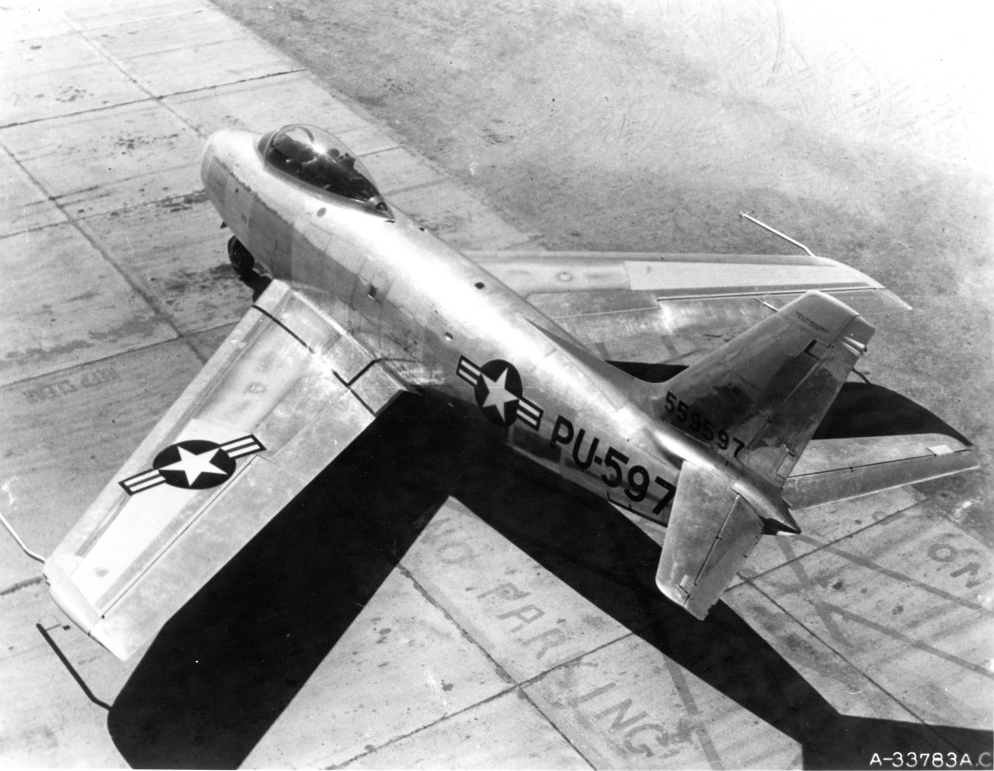 George Welch was born George Lewis Schwartz, in Wilmington, Delaware, on May 10, 1918. His parents changed his surname to Welch, his mother’s maiden name so that he would not be affected by the anti-German prejudice that was widespread in America following World War I. He studied mechanical engineering at Purdue and enlisted in the Army Air Corps in 1939.

George S. Welch is best remembered as one of the heroes of Pearl Harbor. He was one of only two fighter pilots to get airborne during the Japanese surprise attack on Hawaii, on December 7, 1941. Flying a Curtiss P-40B Warhawk, he shot down three Aichi D3A “Val” dive bombers and one Mitsubishi A6M2 Zero fighter. For this action, Lieutenant General H.H. “Hap” Arnold recommended the Medal of Honor, but because Lieutenant Welch had taken off without orders, an officer in his chain of command refused to endorse the nomination. He received the Distinguished Service Cross.

During World War II, George Welch flew the Bell P-39 Airacobra and Lockheed P-38 Lightning on 348 combat missions. He had 16 confirmed aerial victories over Japanese airplanes and rose to the rank of Major.

Suffering from malaria, George Welch was out of combat, and when North American Aviation approached him to test the new P-51H Mustang, General Arnold authorized his resignation. Welch test flew the P-51, FJ-1 Fury, F-86 Sabre, and F-100 Super Sabre. He was killed on October 12, 1954, when his F-100A Super Sabre came apart in a 7 G pull-up from a Mach 1.5 dive.

After testing, the North American Aviation XP-86 was approved for production as the F-86A. It became operational in 1949. The first squadron to fly the F-86 held a naming contest and from 78 suggestions, the name “Sabre” was chosen. The F-86 Sabre was in production until 1955 at North American’s Inglewood, California, and Columbus, Ohio, plants. It was also built under license by Canadair, Ltd., Sain-Laurent, Quebec, Canada; the Commonwealth Aircraft Corporation, Port Melbourne, Victoria, Australia; and Mitsubishi Heavy Industries at Nagoya, Aichi Prefecture, Japan. A total of 9,860 Sabres were built. They served with the United States Air Force until 1970.