From an original article by Larry Merritt for Boeing Frontiers Online, adapted by Jason Capra of Vintage Wings. and our staff.

85 years ago today, one of aviation’s best-known and most-loved airplanes was born. On Dec. 17, 1935, the Douglas DC-3 made its first flight. This iconic airplane made air travel popular and airline profits possible, is universally recognized as the greatest airplane of its time. Some would argue that it is the greatest of all time.

It was indeed the plane that changed the way the world flew. The DC-3 made commercial air travel popular and airline profits possible. Its commercial and military service over seven decades has made it an aviation legend.
But in 1935, no one at the Douglas Aircraft Company (now part of The Boeing Company) anticipated the fame the DC-3 would attain. The DC-3’s takeoff from Clover Field in Santa Monica, Calif., aroused little excitement. A notation in the flight log of flight engineer Frank Collbohm, who was aboard the airplane, states the flight was “rather routine.” No members of the press were present, no company executives stood on the flight ramp to congratulate the crew, and not a single photograph was taken—or at least none exists in company archives.
The DC-3 was a logical evolution from the designs of the DC-1 (Douglas Commercial Model-One) and DC-2 airliners. The 14-passenger DC-2 had become the world’s most popular airliner and had won fame for company founder Donald W. Douglas. But C.R. Smith, president of American Airlines, thought a DC-2 with sleeping berths would give his company a competitive edge on American’s overnight flights from Chicago to Los Angeles.
In the fall of 1934, Smith called Douglas to gauge his interest in building such a plane. Douglas said he had a full backlog of DC-2 orders and couldn’t take on any additional work. Smith, however, wouldn’t take no for answer. It took two hours to convince Douglas to build his plane.
The plane Smith ordered was called the Douglas Skysleeper Transport and would carry 14 overnight passengers in unparalleled luxury. Fourteen plush seats in four compartments could be folded in pairs to form seven berths, while seven more folded down from the cabin ceiling.
The DC-3 turned out to be more than just a scaled-up version of the DC-2. Douglas engineers found that in order to widen the plane’s passenger cabin to accommodate the sleeping berths, the wing and tail had to not only be enlarged but completely redesigned. In addition, because of the added weight, the airplane needed more powerful engines to maintain its performance. These changes resulted in what one aviation historian has called “virtual aerodynamic perfection.” When Smith saw how large the cabin had become, he ordered a second batch of planes with the sleeping berths removed and an additional row of seats installed. The change gave the DC-3 room for 21 passengers, a significant increase over the 12 to 14 carried by other commercial transports then in service. Other airlines quickly followed Smith’s lead, most opting for the 21-passenger version.


The DC-3, with a top speed of more than 200 mph (320 kilometers per hour), was faster than its competitors. With a maximum range of 1,200 miles (1,930 kilometers), it traveled farther. It was the first airliner that reduced the U.S. coast-to-coast flight time to 15 hours, a considerable improvement over the existing 20-hour transcontinental service. Pilots liked the DC-3 because it was easy to fly. Maintenance people liked it because it rarely broke down. Passengers liked it because it was comfortable and safe. The airlines loved it because it was the first airplane that made money just by carrying passengers, instead of relying on government Air Mail contracts to generate profits.
Less than a year after entering service, the DC-3 became the standard against which all others were measured. In a period of five years, 32 airlines placed orders for more than 400 DC-3s. By 1940, DC-3s were carrying more than 80 percent of the world’s civilian air traffic. With the outbreak of World War II, the U.S. government halted the manufacture of commercial DC-3s and ordered Douglas to mass-produce a version for the military. By 1945, when the last was delivered, more than 10,000 had been built. At the wartime peak, the production rate was 1.8 aircraft per hour.


Military DC-3s were given more than 20 official designations including Vintage Wings’  C-53, but most were known as C-47 Skytrains. Vintage Wings is restoring a combat veteran Douglas C-53 Skytrooper Beach City Baby. The Operation Torch veteran and workhorse of the North Africa Campaign moves ever-closer to completion in her hangar at Franklin Venango Regional Airport just north of Pittsburgh, Pennsylvania. Her restoration effort continues to steadily advance, and the exceptional quality of work leaves no detail unaddressed. You can read all about this great restoration HERE. 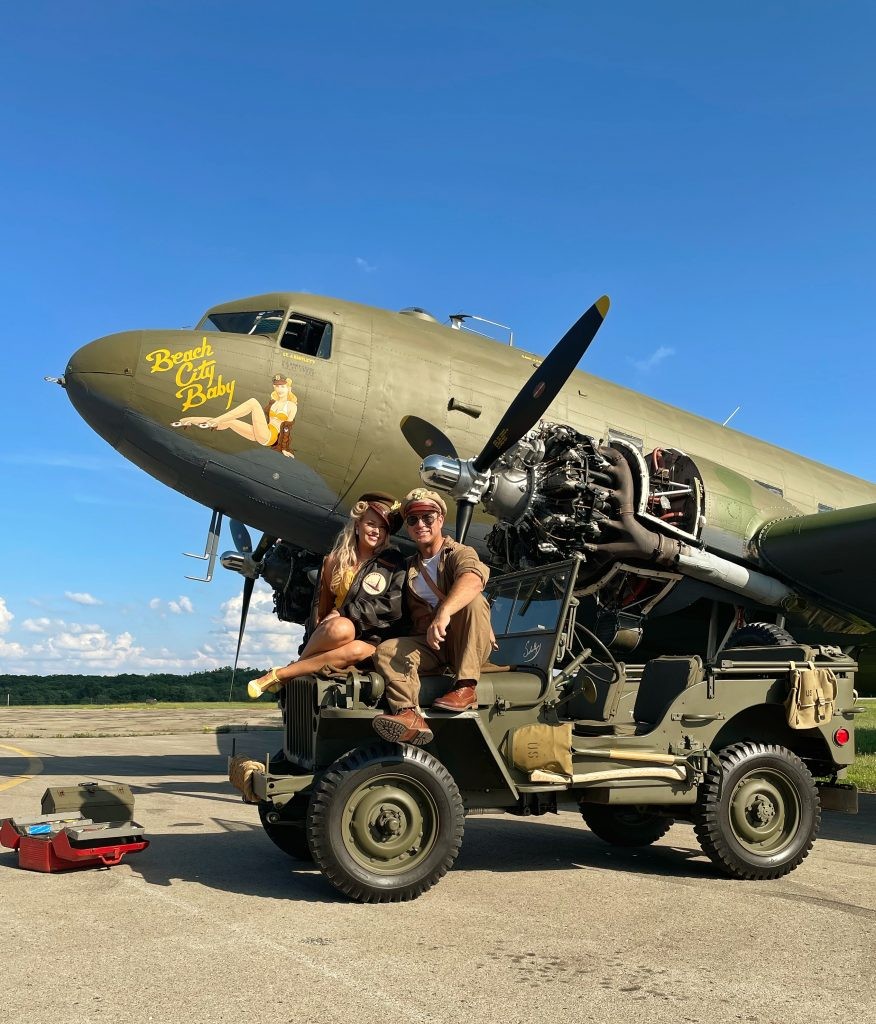 They also collected a host of good-natured nicknames, the best-known being the “Gooney Bird.” Every branch of the U.S military and all the Allied forces flew them. The DC-3’s reliability made it seem almost indestructible. The plane was a favorite in dispatches from war correspondents. One story told of a C-47 that had lost the top of its fuselage in a collision with an enemy fighter. The fighter crashed, but the C-47 made it safely back to base. After World War II, hundreds of C-47s were converted into 28-passenger DC-3s and sold to airlines all over the world. Other conversions included agricultural and insect-control spray planes, forest-fire bombers, and executive aircraft.
Those remaining in the military continued to serve with distinction. C-47s played a major role during the Berlin Airlift. Between 1948 and 1949, they airlifted more than 2 million tons of food and supplies into that beleaguered city. Air Force and Navy transport squadrons saw action again during the Korean War. During the Vietnam War, some Air Force C-47s were converted to gunships. Given the designation AC-47 (“A” for attack) and the call sign “Spooky,” they provided close air support to ground forces.

Today, eight and a half decades after its first flight, hundreds of DC-3s are earning their keep carrying passengers or cargo. A precise count is impossible because turnovers in ownership are frequent and registrations are scattered worldwide.

One of the greatest achievements in modern days and a true testament of the greatness of the Douglas design was the D-Day Squadron’s 2019 D-Day 75th Anniversary mission. Last year the D-Day Squadron,  successfully crossed the Atlantic with 15 C-47 and DC-3 aircraft, completing multiple paratrooper drops and a presidential flyover while participating in events including the 75th anniversary of the Normandy landings, the 70th anniversary of the Berlin Airlift, and commemorations in Connecticut, Maine, Scotland, United Kingdom, France, Germany, and Italy. You can read our articles  HERE,. Our special issue about the event is also available in digital format. 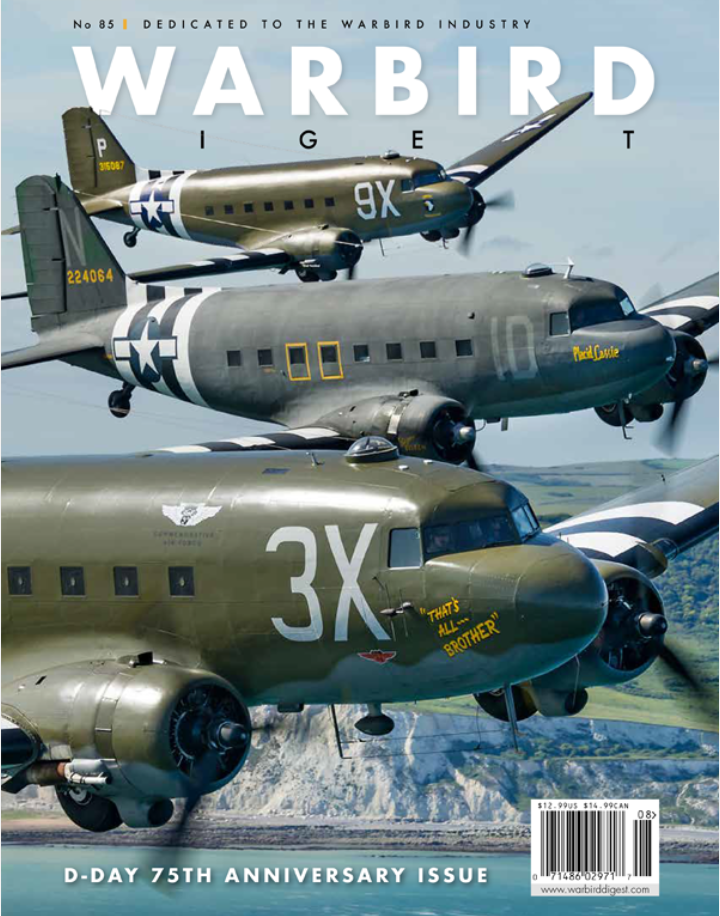