The first of the “Century Series” fighters, the career of the North American F-100 Super Sabre can be summarized by a series of superlatives: the fastest, the highest-flying, and longest endurance aircraft of its era. Although it was rapidly overtaken by other aircraft designed specifically as ‘pure’ fighters, the “Hun” (as their pilots called them) found its best niche as a fighter-bomber role. Used extensively by the U.S. Air Force in this role during the Vietnam War, the type concluded its active military service in the hands of Allied air forces in the 1980s. On Tuesday, July 2oth, our own James Church, aka “Hun Hunter,” had the opportunity to witness Dean “Cutter” Cutshall’s flying his North American F-100F Super Sabre, 56-3948 (N2011V), and the following is his report.

I had missed the first of two planned flights of the day, as this intrepid editor was back at the Warbird Digest offices arranging for some great upcoming content for the magazine. I was told that Dean had a second flight lined up for 6:00 p.m., so I left the office at 5:00 and made a b-line for Fort Wayne International Airport (FWA), where the F-100 is based. When I arrived, it was nowhere to be seen on the ramp, and I feared I may have made the trip for nothing. Old aircraft being what they are, I fully expected to hear from ‘my man on the inside, Brady Sorell at Premiere Avionics, which shares a hangar with the F-100. I sent him a quick text to see what was up, and he told me they would be pulling it from the hangar shortly (thanks Brady!).

Whenever I go out to watch Dean fly the Hun, it is always a crapshoot as to where to situate myself for photos. While he follows pretty much the same routine for each flight, there are several conditions to consider in choosing the best site to photograph him in the air. He’ll take off and depart the area for twenty minutes or so and then, on return, make several passes over the airport, each time down one of the several available runways at FWA. But, in terms of images, one has to consider the lighting conditions present at the time the flight takes place, and where to best position yourself to take advantage of this aspect while also ensuring your opportunity to capture the most, best shots! It’s not as easy as you might think – and it is a large airport! It can take upwards of twenty minutes to navigate the airfield perimeter, so you’d better make the best-educated guess you can, get to your chosen spot quickly to settle in, and hopefully, get a few good frames of the action.

Between dodging airport security (I’m on the OUTSIDE of the fence fellas…come on!), traffic, and some of the worst-timed traffic lights I’ve ever seen, I always worry that the rush of adrenalin will make my hands shake enough to ruin any photos I actually do manage to get. This is by no means a complaint – on the contrary – I love the hunt, especially when it pays off! Well, everything worked out right this time, as I was stationed at the approach end of Runway 5, on the south side of the field. I was treated to one scorching pass, and the landing – all with the sun low on the horizon to my back, and the F-100’s aluminum skin glowing beautifully as it went by. No tickets from the coppers and an up-close and personal visit with the ‘Hun’ was certainly a great way to end the day!

Since I last saw her, the F-100 has had drop tanks reinstalled. To me, they are part of the Hun’s look, and I am glad to see them back in place. Cutshall has also added inboard and outboard weapons pylons, and the Hun currently sports two replicas Mk.82, low-drag 500lb. bombs on the outer stores. Two napalm canisters are currently being re-worked into travel pods, and these will mount to the inner pylons in due course, giving the Hun a much more war-like appearance. Cutshall hopes also to locate and install a centerline pylon too. If any of our readers have a local NAA dealership nearby or know where to locate one, please do contact us through the Warbird Digest offices, please. Hopefully, once the Hun is fully “bombed up,” I can get more images to share with Warbird Digest fans.

As already noted, Dean’s aircraft is an F-100F, the two-seat Super Sabre variant, constructed in the first months of 1958 by North American Aviation in Inglewood, California. Assigned serial number 56-3948, it was accepted by the USAF on March 25th of the same year. Its story is fairly unique as just over a month after the USAF took delivery, they selected her for conversion into a JF-100F, an airframe dedicated to special test flying. Subsequently, she found herself assigned to the Air Force Missile Development Test Center at Holloman, New Mexico. In April 1965, she went through further modifications to become a JDF-100F, optimized for the airborne control of radio-guided targets. In 1968 she reverted back to a normal F-100F two-seat trainer. From July 1970 she was assigned to the AFSWC at Kirtland, New Mexico, in whose colors she flew for three years before flying into retirement in the “boneyard” at Davis Monthan in January 1973. However in May 1974, after little more than a year in stasis, she was resurrected from her resting place under the baking sun of the Arizona desert and sent to the Sacramento Air Material Area at McClellan AFB and prepared for delivery to the Turkish Air Force, which received her in August 1974, via the MDAP program.

We owe a great debt of gratitude to the owners and operators of these vintage aircraft, as the demands in both time and treasure required to keep something like a Century Series jet fighter plying the skies are astronomical. I can only hope that we may continue seeing these wonderful machines gracing the skies deep into the future. 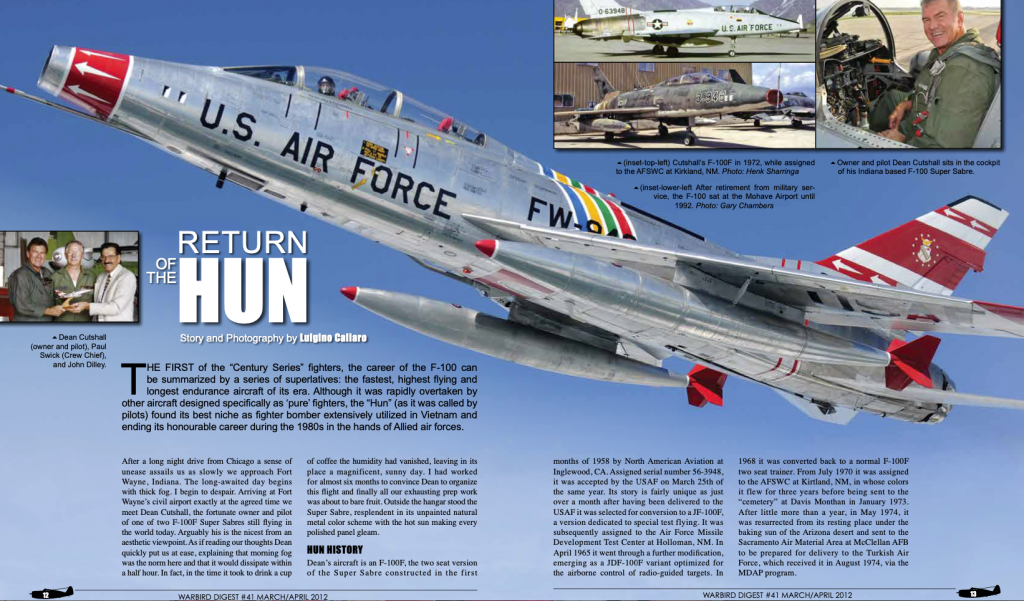