As most readers will be well aware, Stallion 51 is one of the world’s premier warbird flight experience operators. Based at Kissimmee Gateway Airport in Kissimmee, Florida, the company has been providing premium flight experiences and pilot training in the P-51 Mustang (and other warbird types such as the T-6) for many years now. Indeed, as the company recently stated: “2022 marks Stallion 51’s 35th year of making Mustang memories. Three and a half decades flew by, literally. Tens of thousands of hours flying aviation enthusiasts, sharing the cockpit of Stallions dual-cockpit, dual-control Mustangs so everyday people can experience the extraordinary history and power of the Mustang for themselves flew by as fast as a ‘low approach’. People from all walks of life, from all over the world, went to Stallion 51 in Kissimmee, Florida to experience what they read about, made models of in their youth, heard what their parents or grandparents talked about, and come to be part of history first hand at the controls of the iconic WWII fighter, the P-51 Mustang.”

We felt that this momentous anniversary deserved proper recognition, so we met up with Lee Lauderback, the company’s President and CEO, to capture some of his thoughts on his decades of experience in providing so many people with the coveted experience of flying in one of WWII’s finest aircraft. Our very own Moreno “Mo” Aguiari, in cooperation with AeroNews Network, had the opportunity to speak with Lauderback during this year’s EAA Sun ‘n Fun Aerospace Expo to learn more about the legendary aviator’s experiences with Stallion 51. 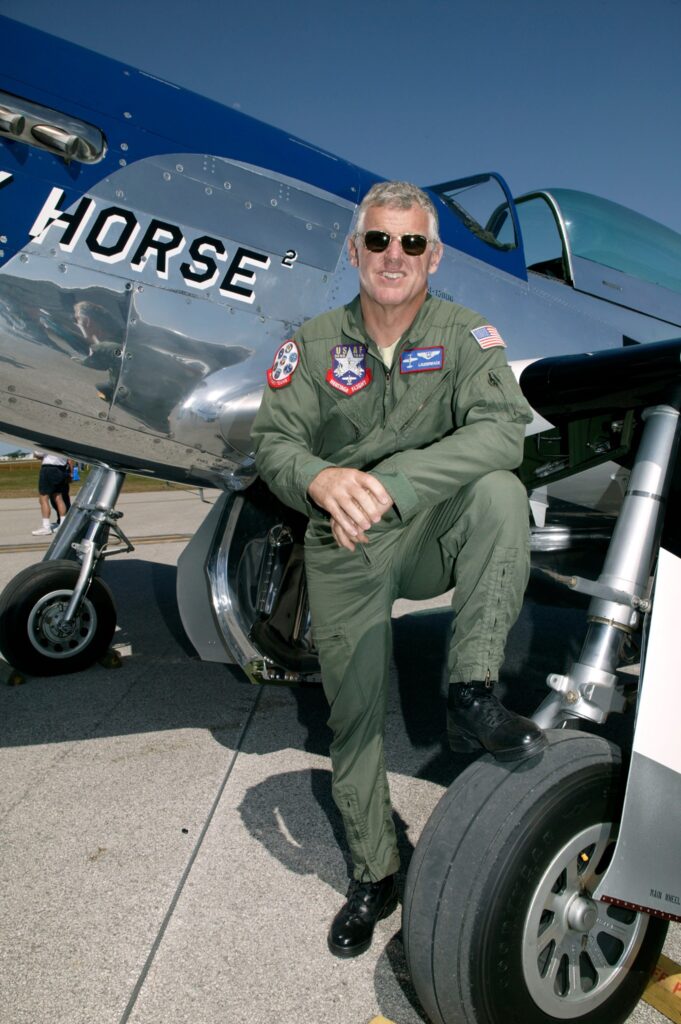 “My first flight in an aircraft was with my dad,” Lauderback stated. “He was a naval aviator, but it was in a North American Navion at two years old. I started flying gliders at 14, then powered airplanes, soloing on my 16th birthday. All I wanted to do was fly fighters, but going up through there, I realized my vision wasn’t quite 2020, so flying military became a major issue.”

This didn’t stop Lauderback from fully immersing himself in the world of high-performance flight though. If anything, it was a major motivator for his overachievement. Lee Lauderback is a certified single and multi-engine flight and ground instructor and holds an Airline Transport Pilot certification not to mention instrument, helicopter, and glider ratings. He has over 22,000 flight hours in all types, but more than 10,00o in P-51 Mustangs alone! He has been Stallion 51’s chief flight instructor since the company’s inception in 1987.

Lauderback’s expertise extends well beyond the warbird arena, however. Indeed his vast experience in both corporate and private aviation have earned him the distinction of being an FAA Experimental Aircraft Examiner. Furthermore, in 2016, NASA astronaut, Hoot Gibson, nominated Lee to become a member of the Society of Experimental Test Pilots, a rarified group of phenomenal pilots which includes such luminaries as R.A. “Bob” Hoover. Lee is often called upon to flight test various vintage aircraft, helicopters, and turbojets before they are accepted for service. 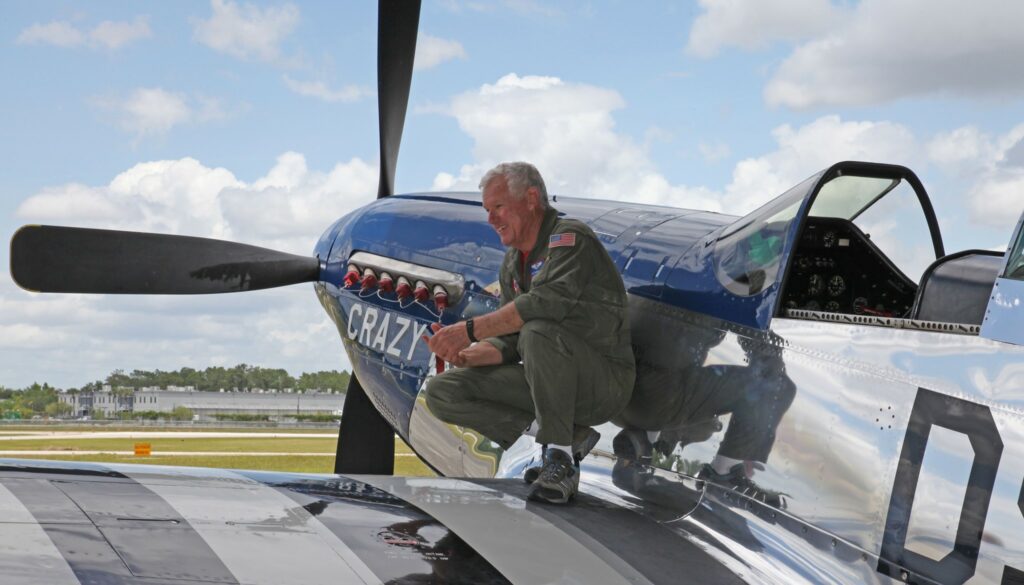 In 2017, the Federal Aviation Administration recognized Lee Lauderback for his 50-plus years of safe flight operations and his many contributions to aviation safety with the Wright Brothers Master Pilot Award Program.

Lee has expanded his aviation knowledge and experience to include flying hours in the F-15 Eagle, F-16 Fighting Falcon, F/A-18 Hornet. He has also test flown the Hawker Beechcraft T-6 Texan II. He also has over 2,000 hours in sailplanes, competed in many soaring contests and has even earned several sailplane records.

In 2017, Lee Lauderback also received the Sword of Excellence from the International Council of Air Shows (ICAS). This prestigious award, the highest which ICAS can confer, recognized the pilot’s 30+ years flying P-51 Mustangs, his dedication to aviation safety and his commitment to improving and contributing to air shows. Part of the latter included Lauderback’s involvement with the USAF Heritage Flight, with the pilot being one of the first civilians selected to participate in this elite program which showcases historic military aircraft in close formation with present-day Air Force jets at air shows across the nation. Lauderback has also instructed Navy Test Pilot School students at NAS Patuxent River in Maryland for many years as well.