While we rarely cover serving military aircraft here at Vintage Aviation News, there are occasional exceptions to this rule. Indeed, how could we resist featuring one of NASA’s most fascinating aircraft, the Lockheed ER-2 Dragon Lady, when one of them just happened to visit our home field near Atlanta, Georgia? NASA employs two examples of the ER-2, a variant of the legendary U-2 spy plane, in upper atmosphere research programs. Last week, ER-2 NASA 806 (formerly TR-1A 80-1063 of the US Air Force) landed at Dobbins Air Reserve Base in Marietta, Georgia. This visit inspired us to look into the aircraft’s mission and, of course, to capture a few images of this magnificent beast in flight! 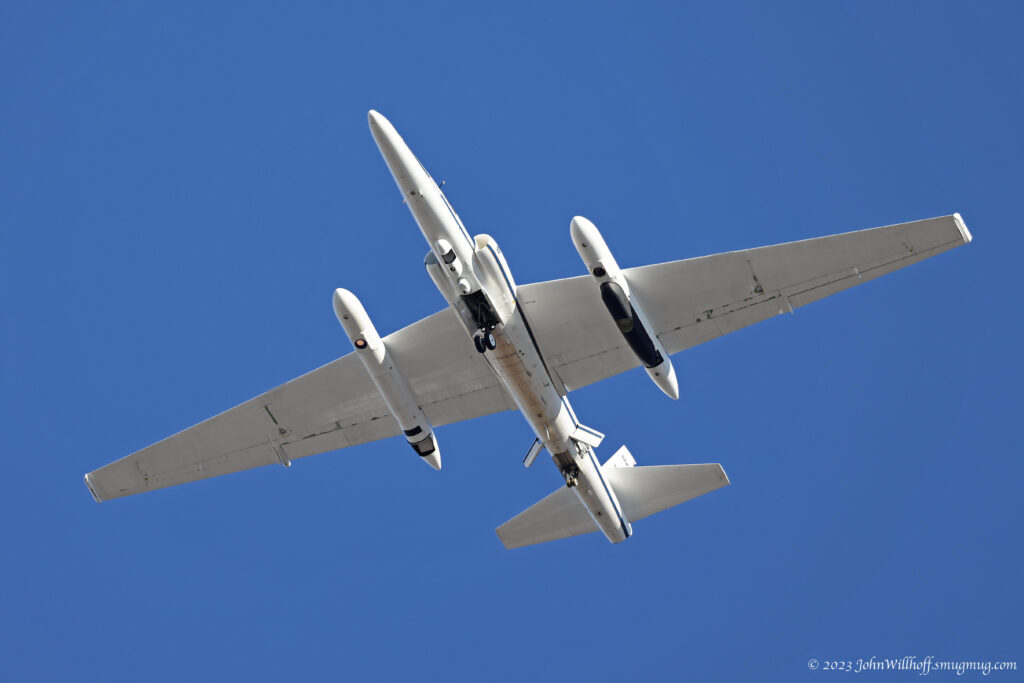 The ER-2 serves as a flying laboratory in the Airborne Science Program, part of NASA’s Science Mission Directorate. The aircraft stage out of NASA Armstrong Flight Research Center’s Building 703 in Palmdale, California. Being able to fly for long periods at altitudes well above 60,000′ in level flight, the ER-2 is uniquely able to collect certain kinds of detailed information about Earth resources, atmospheric chemistry and dynamics, and oceanic processes. They can also make celestial observations with minimal distortion and an absence of light pollution. Furthermore, the ER-2 is an effective platform for electronic sensor research and development, satellite calibration, and satellite data validation.

NASA has a long association with the Dragon Lady, acquiring their first two examples (U-2s) on loan from the USAF in 1971. The first ER-2 (ER standing for Earth Resources) arrived in 1981, with a second airframe joining NASA in 1989. The ER-2s eventually replaced the earlier U-2s. NASA’s Dragon Lady fleet was initially based with the Ames Research Center at Moffett Field, in Mountain View, California before moving to its present facility in Palmdale during 1997.

The subject aircraft for this article, ER-2 NASA 806 (registered with the FAA as N806NA) is expected to remain at Marietta through March 5th, 2023. She launched from Dobbins Reserve Base for the first time last Thursday evening to study a dynamic weather system then projected to move through Georgia. We took the opportunity to position ourselves outside Dobbins, capturing the video and images below…

The ER-2 is a versatile aircraft, well-suited for a diverse array mission tasks. They typically operate at altitudes varying from 20,000 feet to 70,000 feet, with the latter being above 99 percent of the Earth’s atmosphere. The ER-2 can carry a maximum payload of 2,600lb, distributed between the fuselage equipment bay, nose area, and wing pods. Depending upon the aircraft’s take off weight, an ER-2 can reach an initial cruise altitude of 65,000 feet within 20 minutes of take off, where it can maintain a cruise speed of 410 knots. Over the course of a normal, eight-hour mission, an ER-2 can fly up to 3,000 nautical miles, producing seven hours of data collection at altitude. That being said, in the right configuration, the aircraft can fly missions exceeding 10 hours over distances beyond 6,000 nautical miles.

The aircraft has four large, pressurized experiment compartments and a high-capacity AC/DC electrical system, permitting it to carry a variety of payloads on a single mission. The aircraft’s modular design permits rapid payload installation/removal, which allows the platform to adapt efficiently to any changes in mission requirements.

The ER-2 often partners with a NASA P-3 Orion when studying weather systems. During such operations, the ER-2 will operate its advanced radar, lidar, and microwave radiometer remote sensing instruments, while the P-3 collects data from its sensors to measure the water content and particle size in clouds, icing and the airflow around a precipitation event. The P-3 can also deploy radiosondes similar to those used to study hurricanes.

At an operating altitude approaching 70,000 feet, the ER-2 can look down on about 95% of the Earth’s, while the P-3 Orion flies through the cloud layer at about a third of that altitude. These aircraft, working with ground observations and weather satellites such as the Global Precipitation Measurement (GPM) and GOES spacecraft, study the atmosphere from top to bottom in conditions which can deliver snow, for instance, which is a particularly useful tool for developing stronger predictions for how, where and when specific weather conditions may arrive and how such situations may affect life on our planet.

We have covered a number of aircraft which the National Aeronautics and Space Administration and its forebear, the NACA, have operated over the years. To see some of these articles, please click HERE.