Some 45 years after almost 600 Americans returned home from imprisonment in North Vietnam, the Dallas-area community will honor these former prisoners of war at a special program at the Cavanaugh Flight Museum in Addison, 7-10 pm on May 24, 2018. The program will feature a panel of six former Vietnam POWs, all now living in North Texas, who will describe and reflect on their experiences. The discussion will be moderated by former Dallas Cowboys defensive star Chad Hennings, a three-time Super Bowl champion and former US Air Force combat fighter pilot.

The event will be sponsored by Service Air Corps, http://www.serviceaircorps.com, a Dallas-based nonprofit that honors American military members and veterans by staging flyovers at little or no cost to community organizations throughout Texas.

Funds raised by the event will be used to pay selected Texas flight museums for the use of their Vietnam-era aircraft for the 45th Anniversary of Freedom of the Vietnam POWs flyovers on Aug. 17, 2018. Tables of 10 cost $5000. Individual tickets cost $300. All tickets must be purchased in advance. For more information, call Service Air Corps at 214-855-2258.

A little more than 45 years ago, from Feb 12 through late March, 1973, under the terms of the Paris Peace Accords, 591 American POWs returned home from imprisonment in North Vietnam. The effort was called, “Operation Homecoming.” The former POWs ranged from privates first class to colonels. Among those on the first flight was Navy Cmdr. Everett Alvarez Jr., the first American pilot to be shot down in North Vietnam and, by the war’s end, the longest-held POW there. He spent 8.5 years in captivity.

The former Dallas-area POWs, all now retired from the military, who will speak at the Service Air Corps event on May 24, will be: 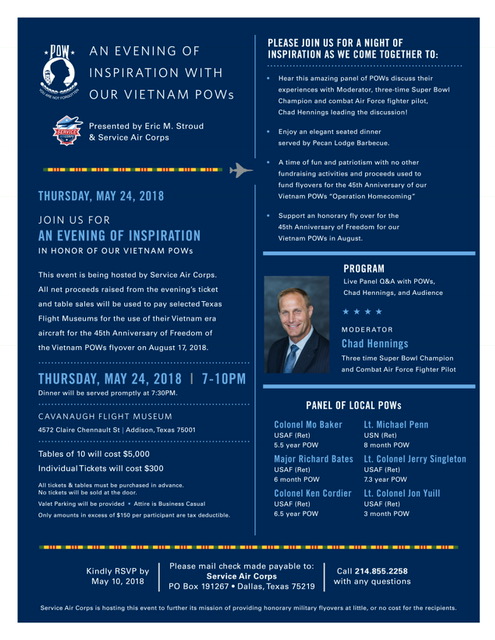