All too often, we come across complaints on social media or online fora regarding neglected former military aircraft mouldering away somewhere in a sad state of affairs. People are all-too-fast to point out an aircraft’s state of abandon and poor condition, but oddly enough, very few are actually willing to do anything to remedy the situation. This is a regular refrain across the aviation community, whether it be in the USA, Europe or further afield. It’s an all too human trait to complain without offering a viable solution, of course. But the story here has a more positive conclusion; it features a gallant group of individuals in Ohio who chose action over belly-aching. They banded together to rejuvenate a forlorn, combat-veteran McDonnell-Douglas F-4C Phantom II in much need of attention. We hope the example this dedicated team has set with their initiative and hard work serves as inspiration to other aviation-minded people around the world: Don’t just complain and move on… DO SOMETHING POSITIVE!

In the mid-to-late 1960s, the skies over Southeast Asia were filled with danger. During that time, the United States had started to build up its forces in that region. As part of this massive undertaking, a flotilla of F-4C Phantom IIs moved from their peacetime home at MacDill Air Force Base near Tampa, Florida to Ubon in Thailand as part of the 15th Tactical Fighter Wing (TFW). Of course, this threat-escalation prompted a response from their counterparts in the North Vietnamese Air Force, who increased their air defenses to mitigate the increased USAF presence.

F-4C 64-0683 was one of the aircraft arriving from MacDill. It was soon to lose its domestic overall grey livery in favor of a hastily-painted, three-tone camouflage scheme of dark green, medium green and sand so it could better blend in with the jungle.

683’s combat history is not fully known, presently, but one thing is clear: from publicly available records available, 64-0683 was part of the 45th Tactical Fighter Squadron (TFS) within the 15th TFW. On July 10th, 1965, the 45th TFS scored the first USAF victory over an enemy MiG in the conflict using an AIM-9 Sparrow heat-seeking missile. While unconfirmed, it is possible that 64-0683 was involved in the mission which resulted in this victory. One can imagine, in the humid skies over Southeast Asia, 64-0683 would pull zoom climbs, dives and high-G turns that left contrails from her wings while supporting this and other air combat against MiG-17s, 19s and 21s.

Fast-forward nearly 50 years from those combat missions to 2011; 64-0683’s engines have long been silent. She now sits, mute, at Newark Heath Airport in central Ohio; her only movement coming occasionally when fierce winter winds sometimes nudge her stabilator. Her camo combat finish is no more; replaced with a more contemporary overall grey color scheme that closely matches the leaden Oho winter skies.

From 1965 to 1969, 64-0683 underwent a number of different transfers between U.S. Air Force bases in Arizona and Japan, where she served  initially as part of the 4453rd Combat Training Wing, preparing green pilots for doing battle in Southeast Asia. On December 1st, 1970, the fighter was involved in a refueling mishap at Davis-Monthan AFB near Tucson, Arizona. The ensuing fire damaging a large portion of the aircraft, rendering her beyond economic repair. The Air Force struck her off as a result, but being adjacent to the U.S. military’s main bone yard probably saved the airframe from simply being scrapped on site. Several years later, the Air Force Orientation Group (AFOG) was looking for a ground demo aircraft to display at air shows and other events. Taking the 64-0683’s carcass and components from other USAF F-4Cs, as well as the cockpit layout and nose section from a U.S. Navy F-4B, the patch-work Phantom II became a complete aircraft once more and went on tour. When the AFOG wanted a more modern F-16 for its operations, the National Museum of the U.S. Air Force (NMUSAF) took her on, and displayed the fighter for several years.

When the NMUSAF came across a more desireable F-4 for display, they transferred 64-0683 to what was then Newark AFB in Heath, Ohio. This facility, not an active airport, worked on the LN-12 aircraft guidance systems which the F4-Cs used. 64-0683 by road at Newark AFB in 1987 to become its gate guardian, but her maintenance was not a high priority. In 1996, a group of aviation enthusiasts decided to become the aircraft’s guardian. With great effort, they moved 64-0683 to a new home at the nearby Newark Heath airport as a static display with night lighting and a flagpole. Terry Treneff was on the airport’s board and played a role in the Phantom’s subsequent restoration.

In late 2010, our family moved back to Ohio from Atlanta to keep an eye on my wife’s parents. As part of this move, I received a checkout in the late fall for rental aircraft at Newark Heath airport. After my checkout, I asked about 64-0683 which I’d seen during my visit. As I was talking about the aircraft with the CFI, one of the “hangar pilots” sitting on the couch nearby overheard our discussion and blurted out, “You know, someone ought to spruce up that bird!”

That’s all it took…

On a cold December day in 2010, I started posting to the Warbird Information Exchange (WIX) message board asking for support to repaint 64-0683 in her original Southeast Asia combat finish. The response was overwhelming; people from all over the US and abroad offered to dig into research on 64-0683’s history and the proper markings from her days in combat. It is a common trope that an aircraft restoration won’t be ready to fly until the amount of paperwork covering the work equal’s the aircraft’s actual weight; the same can be said of a static restoration! In addition, Rick Harris who works on the Collings Foundation’s active F-4 let me take numerous pictures of their airworthy aircraft to help get the markings and detailed stenciling recorded accurately. Unfortunately, we couldn’t find the appropriate Federal Standard (FS) paint colors, nor did we have the finances to afford aircraft-grade paint, so we were forced to make best efforts to match the colors available at a local hardware store. 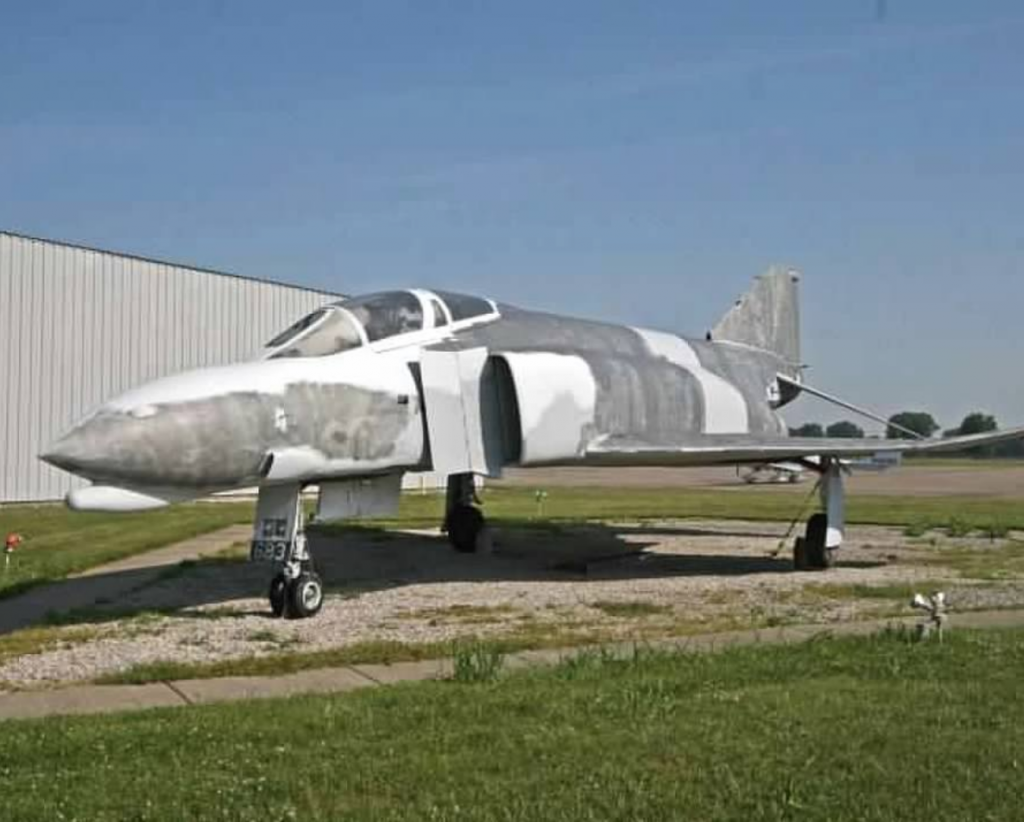 From there a team formed which included Terry Treneff (who helped move the aircraft to the airport, helped with research and created 64-0683 t-shirts), Michael Bates (research, paint and markings), Michael Keaser (has the tallest ladders in town!), Norman Green (no fear of heights when clambering up and painting the vertical stabilizer) and myself conducted a months-long effort to power-wash, sand, repaint and apply markings to 64-0683. Our efforts culminated with a formal unveiling on November 11th, 2011 with a Veterans Day ceremony with the Newark Heath Mayor and local newspaper staff in attendance. It was a proud day for our team as well as for 64-0683! Steve Beebe lent his support highlighting the aircraft’s restoration in magazine articles. 64-0683 was now known across the world, no doubt putting a smile on the faces of many former F-4 aircrew and others who served in Southeast Asia due to their being remembered at a small airport in central Ohio. 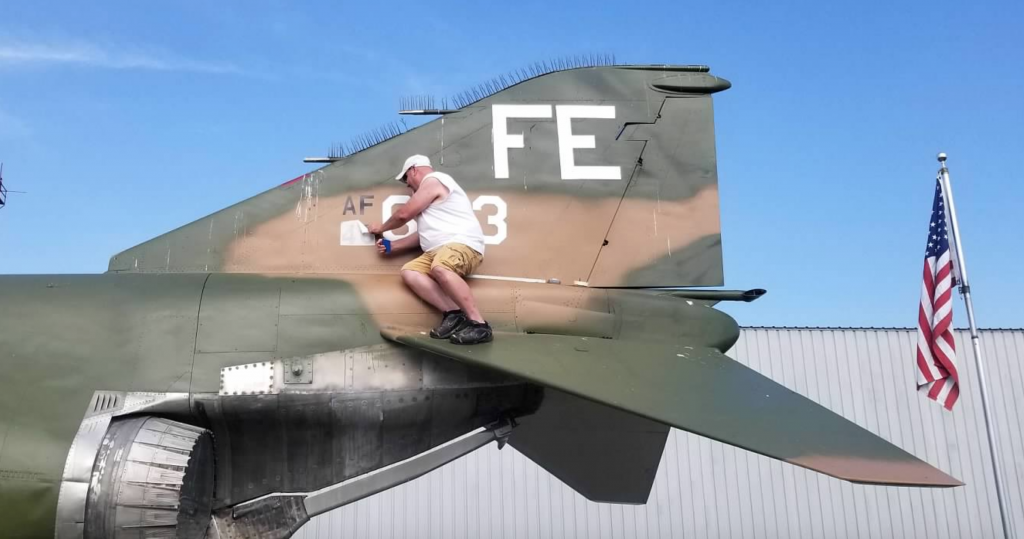 As an aside, someone commented about the paint drips on the tail section. As it happens we actually applied these on purpose to replicate the conditions during her hurried wartime repaint in Thailand following her arrival at Udorn in the early 1960s. Back then, in the rush to paint aircraft to ready them for combat, it was not uncommon to have paint drips…so these irregularities are actually historically accurate! 64-0683 has subsequently received many positive comments, including one from a former F-4C crewman who left a note taped to the nose gear door thanking everyone for their efforts!

In the spring of 2020, the same old restoration team, as well as newcomers Ed Roo and Jeremiah Young, began to refurbish the F-4’s paint and markings. After a deep power-wash, we applied an even more accurate color scheme using precise Federal Standard which Shannon procured from a local suburban Sherwin-Williams store (thanks Shannon!). Michael Bates, working with a local signage company, produced high resolution markings that will be even more durable than the original painted markings. 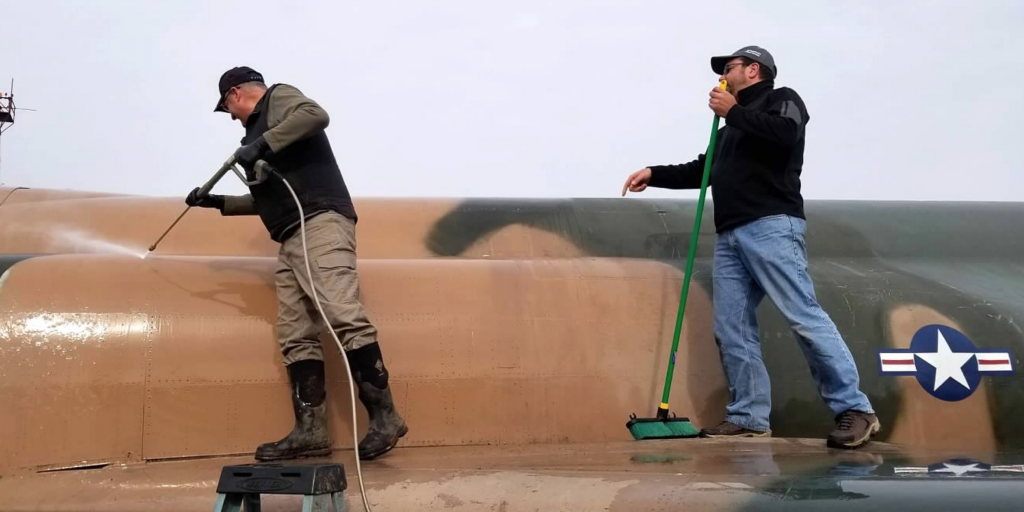 For this phase, we are also in the process of procuring solar-powered lighting for the navigation, formation and landing light positions. These will add much to the already impressive night lighting. It would not come as a surprise if Terry and the airport staff get phone calls about someone having left 64-0683 running!

64-0683 will have pride of place with the upcoming 2021 Southeast Asia Remembrance event at Newark Heath airport. Although she can no longer carve vapor trails with high-G turns in the humid Ohio summer skies, thanks to the efforts of our restoration team, maybe the old bird thinks she can!

If anyone would like to help keep this Phantom looking pristine or contribute to our historical knowledge, please do e-mail Kevin Korterud at kkorterud@yahoo.com.