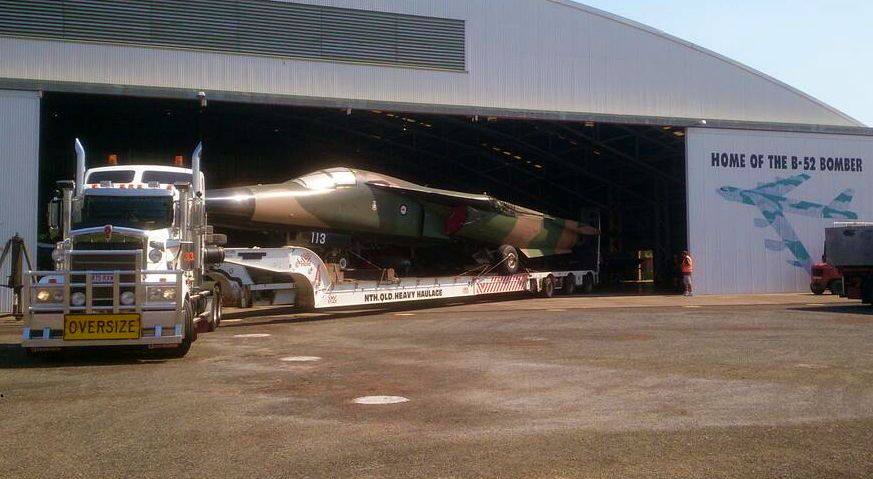 The fifth of six Royal Australian Air Force (RAAF) General Dynamics F-111 Aardvarks has landed at its new home, this time quite a bit further away from RAAF Amberly than its mates. Arriving last week after a six-day, nearly 2,000 mile overland journey from the east coast, near Brisbane, to the Australian Aviation Heritage Centre (AAHP) in Darwin. The plane which had been restored to a very high static display standard by the RAAF, was disassembled for trucking and will be reassembled by a special team from the air force in it’s new hangar.

The museum, which is also known as Darwin’s Aviation Museum is also in possession of a pristine Boeing B-52 Stratofortress that is on permanent loan from the US Air Force, which flew in to Darwin under its own power after an 18,000 man-hour restoration performed by volunteers at Andersen Air Force Base in Guam. The strategic significance of Darwin, located at nearly the northernmost point of Australia made it a hub of military aviation. It also made it the target of aerial attacks in 1942-43 by the Japanese who feared that Darwin’s strategic location would provide the Allies a major offensive staging point, which it did indeed become. After the world war, RAAF Darwin’s long runway, built for the long-range bombers that would have been necessary for a prolonged conventional battle to defeat Imperial Japan, made Darwin a facility that was not only designated as an emergency landing site for the Space Shuttle, but during the Cold War, readily accommodated the US Air Forces’ biggest planes like the B-52. The geographical location also lent itself to supporting strategic bomber operations, as when using Darwin as a base, America’s long range bombers could circumnavigate the globe without passing over significant landmasses or more importantly, hostile territory. Over the years these big bombers in flight became a regular sight for the people of the community and while there are no longer Stratofortresses regularly taking off and landing on the runway shared by Darwin International Airport and RAAF Darwin these days, joint exercises between the RAAF and USAF employing the big bombers do still occur. This retired RAAF F-111C, A8-113 is a former USAF warbird that started as an F-111A and it bears the distinction of taking part in the last US bombing raid of the Vietnam War. The plane was reconditioned to the Australia-specific F-111C standard and sold to the Aussies as one of four attrition reserve aircraft in 1982.

The F-111 was only operated by the United States and Australia and the RAAF continued to operate F-111s long after the US had retired the line, having drawn down operations through the early nineties, with the last front line units being withdrawn in 1995 and officially retiring the line in 1998. The Australians, hoping to keep their fleet going purchased over a dozen ex-USAF F-111s as parts reserve sources and managed to keep them flying until the end of 2010 when they were officially retired.

The longevity of the F-111, which made its first flight in 1964 and came to active military duty in 1967 is a credit to the strength of it’s pioneering design. It was the the first production aircraft with variable-geometry wings, automated terrain-following radar for low-level, high-speed flight which, along with its pronounced nose earned it the nickname “Pig” among RAAF pilots, and sported a unique ejection system where the entire cabin ejected as a self-contained “crew capsule.” The F-111 was also the first warbird produced with an afterburner-equipped turbofan engine which, along with the location of its fuel dump outlet, made it capable of spectacular “dump and burn” performances, which became something of an Australian tradition at any public event at which the RAAF performed aerial maneuvers with their F-111s. With a collection bookended with two extraordinarily restored and historically significant warplanes, the B-52 and the F-111 as well as 18 other significant aircraft and the relocated, restored WWII-era combination control and water tower that served RAAF Darwin from 1940 through 1958, the AAHP is a unique venue to experience Australian aviation history, with an impressive facility that blends modern features and guest amenities with historic aviation structures that have borne witness to that history, from the aforementioned water tower to the museum’s restoration hanger which proudly bears the scars of WWII Japanese strafing attacks.