With the recent first post-restoration flight on February, 20th of a rare Consolidated PB4Y-2 Privateer in Casa Grande, Arizona, WarbirdsNews thought our readers would like to learn more about the project, as well as the company responsible for her care, GossHawk Unlimited. We talked with Lindsey Goss, who has been working on the Privateer since the retired fire bomber arrived at her father, Dave Goss’s shop a few years ago.

Owned by 4Y-2 LLC, the Privateer has been undergoing a sort of rolling restoration at GossHawk Unlimited. Rather than have the aircraft down for many years of deep restoration, there is a preference to perform ad hoc work while keeping the Privateer available for flying during at least some of the air show season. As Lindsey Goss stated, “She came to GossHawk in late 2010. We have been doing ongoing restoration and maintenance since then. Seven or more guys have been working on the Privateer. At times, all seven of us are doing the work, and at other times we have one to three people doing the work depending on the task at hand and timeframe before the next flight.

One of the first outwardly dramatic things to happen in April, 2013, for instance, was the removal of the old exterior paintwork from her decades of service as a fire bomber with Hawkins & Powers in Greybull, Wyoming. Brought back to a more authentic-looking, bare metal exterior, the aircraft feels a little more like her old military self now that a few national insignia have been applied to the fuselage and wings. The owners haven’t quite settled on what the final scheme will represent, whether it be for a US Coast Guard or Navy unit.

Structurally, the PB4Y-2 is configured more or less as she was whilst serving in the Coast Guard, but there is talk that the owners may choose to represent a Coast Guard squadron on one side, and a Navy one on the other, since if properly designed it would be nearly impossible to see both sides at the same time. This option is not unprecedented either, as the RAF Museum in England once chose to represent both the RAF and Indian Air Force heritage of their B-24J Liberator similarly. The PB4Y-2 is essentially a modified B-24N, so it wouldn’t be too different a problem to solve.

GossHawk has pulled the propellers one at a time for overhaul starting in September 2013, staggering the times so they were not all out and being overhauled at once. Tulare Aircraft Service in Atwater, California did the prop overhauls. The most recent work at GossHawk has been quite substantive. Until its recent flight, the aircraft had been ground-bound since returning from the Chino Air Show in May, 2014. During the 60 hour inspection last July, a couple of the engines showed low compression issues, and upon further review, GossHawk decided they might need more comprehensive analysis. They removed the suspect #1 and #3 engines and their accessory sections and sent them to the radial engine gurus at Anderson Aeromotive in Grangeville, Idaho for a thorough inspection (which they ended up passing with flying colors). While the engines were off, GossHawk Unlimited made good use of the down time to work on other areas of the Privateer. Some of this work is best shown as a photo essay, so here are some of the images with captions which describe the work. 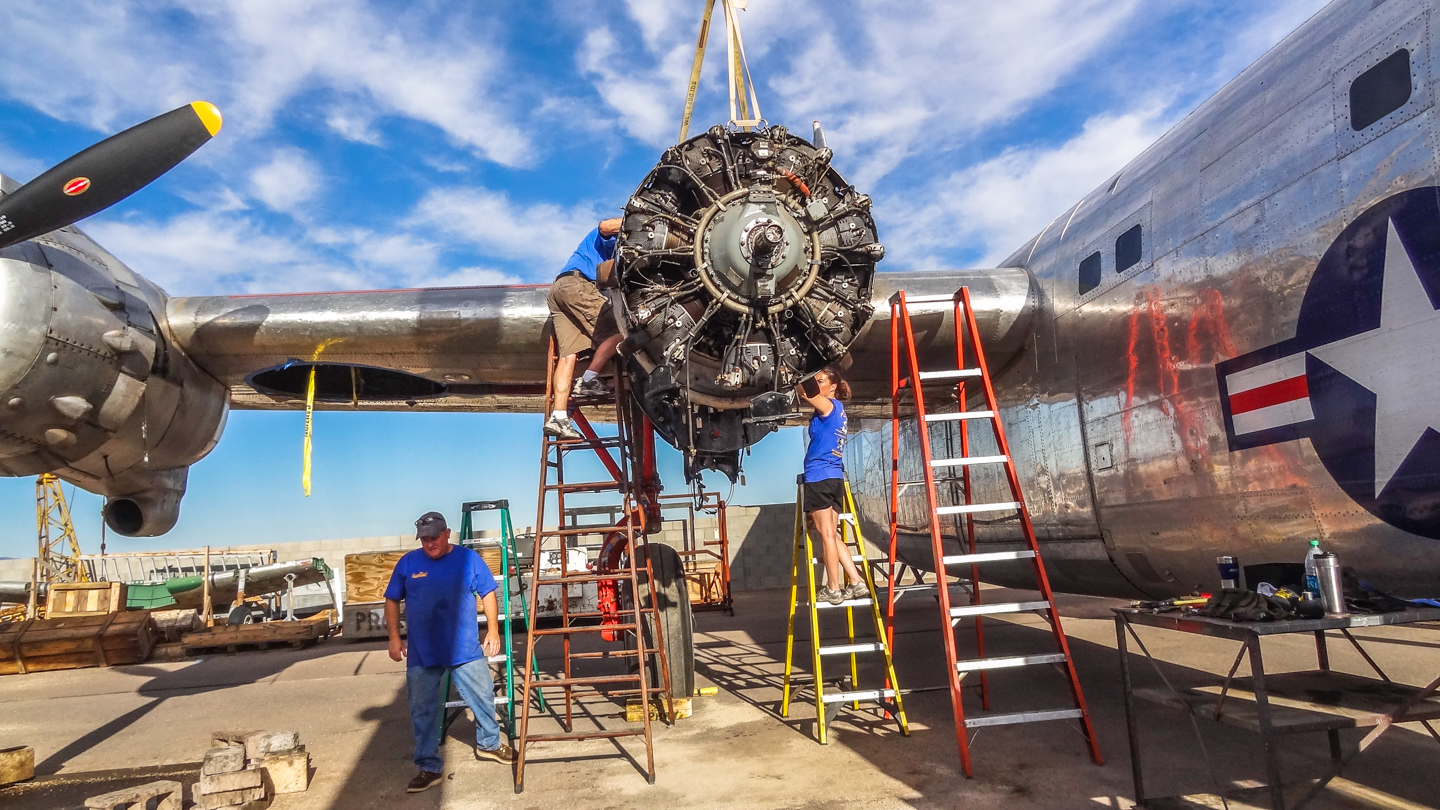 Just to give you an idea of some of the processes involved in maintaining such a large warbird, GossHawk Unlimited have to perform 30hr, 60hr, 12month, and 24month inspections and this includes, but is not limited to: compression tests, inspecting the airframe, inspecting all of the control surfaces, inspecting the hydraulic system, landing gear swings, and cleaning, testing, gapping, and inspecting all of the spark plugs, cleaned and inspected oil screens and fuel screens, and adjusted valves.

Some of the details during the repairs not covered in the photographs include:
– pulling the carburetors for overhaul.
– washing the engine thoroughly to perform engine runs and check for leaks.
– replacing all the fuel hoses.
– continued engine maintenance: replaced a hydraulic pump, 2 magnetos, a fuel pump, etc., and other items as they come up.
– installed a new radio package, including a GPS, transponder and comms.
– rebuilt the left main gear retract actuator.
– repaired the nose wheel centering can.
– rebuilt and adjusted the landing gear selector valve.
– adjusting the flap selector valve.

As you can see, this sort of work requires a dedicated and highly skilled crew, not to mention a bucket-load of dollars to accomplish. Anyone who thinks maintaining a warbird in flying condition is easy and inexpensive, hopefully now understands a little more of the complexities involved!

When asked what the main challenges were in doing the work, Lindsey Goss replied quickly –  “The size of the aircraft. She is so big that she will not fit in our hangar, and this requires extra work to open her up and close her. When the cowlings are off for engine work, the guys must tarp and untarp the engines each day.” She then added, “With the painting, the weather was often an issue. The painting was started in June and by 9:00am it is too hot to paint, so painting started at 4:30am. In the most recent months, it has been rainy and windy, so we had to wait for clear days to finish painting.” Other challenges included, “Waiting for a good, non-windy day to put her on jacks so that we could do landing gear swings and inspect the systems involved.” The engines are continually dripping oil, which is typical of radial engines, so the team are always chasing oil leaks and seeps.

But the fun comes when you get to fly the beast, and these took place in late February. Former T&G Aviation Privateer pilot, Woody Grantham had the honors with Bruce Brockhagen as his copilot, and Dave Goss (IA, A&P, President of GossHawk Unlimited, Inc.) and Robert Kropp (crew chief) aboard for the test flights. The flights went well, but as with every piece of complex, antique machinery, there are always a few things to take care of. Squawks included: addressing a small leak around the #2 oil cooler, rigging the #3 throttle to match the other throttle positions, diminishing some background noise on the new radio, and resealing the right main landing gear retract actuator because it was slow to come up.

When asked what it is like to fly a Privateer, Woody Grantham stated, “It is a non-hydraulic boosted airplane. They are heavier on the controls than the modern airplanes. It takes a lot of pilotage to fly it, just because everything is manually done, and other than that it’s just a normal big airplane – it’s just heavier on the controls mainly.” When asked what his favorite thing about flying the Privateer was, Grantham stated, “Well I flew it for years as a firefighting airplane, and they have a Davis Lift Wing or a high lift wing, and they’re very good for low speeds management of the airfoil, so they maneuver well and for the job we always did with them, they were a pretty ideal airplane for that purpose.”

When asked about the future plans for the Privateer, Lindsey Goss stated, “Right now the big thing is to keep her maintained and in an airworthy condition. Small things need to be done before Oshkosh; such as replacing some of the Plexiglas, restoring areas of the flooring that were damaged by water, sealing some of the panels and hatches that leak when it rains, and putting together a good fly-away kit to be prepared for a long cross-country flight.” Goss continued, “The owners have taken her to multiple airshows in the past, including: the show in Yuma, AZ, El Centro, CA, Chino, CA, Gillespie in San Diego, CA, Copperstate in Casa Grande, AZ and Valle, AZ. This year she is booked to go to Yuma, El Centro and maybe Chino. They plan to take her to Oshkosh, and then after that Thunder Over Michigan.”

GossHawk Unlimited continues to work on several different projects in the shop, along with maintenance on other aircraft. Some of the warbirds currently under restoration include the fuselage of what will become the second airworthy original Focke-Wulf Fw-190, a Flugwerk FW-190A-8/N and an Erco turret as used on a Consolidated PB4Y-2 (but not for the Privateer currently under care). GossHawk also has a substantially complete Douglas A-20 Havoc project in the shop waiting for the right person to buy her and have her restored. Although, this will be a big project, the new owner will have a unique airplane. The original Fw-190 undergoing restoration is the F-8 variant known for many years as “White One”. This will be for for the Collings Foundation. GossHawk is currently in the process of applying skins, while waiting for parts to help finish the fuselage which will be on their way from New Smyrna Beach, FL very soon. The wings are currently in New Smyrna Beach, FL with another shop, and the BMW 801 engine is under rebuild with Mike Nixon in Tehachapi, California.