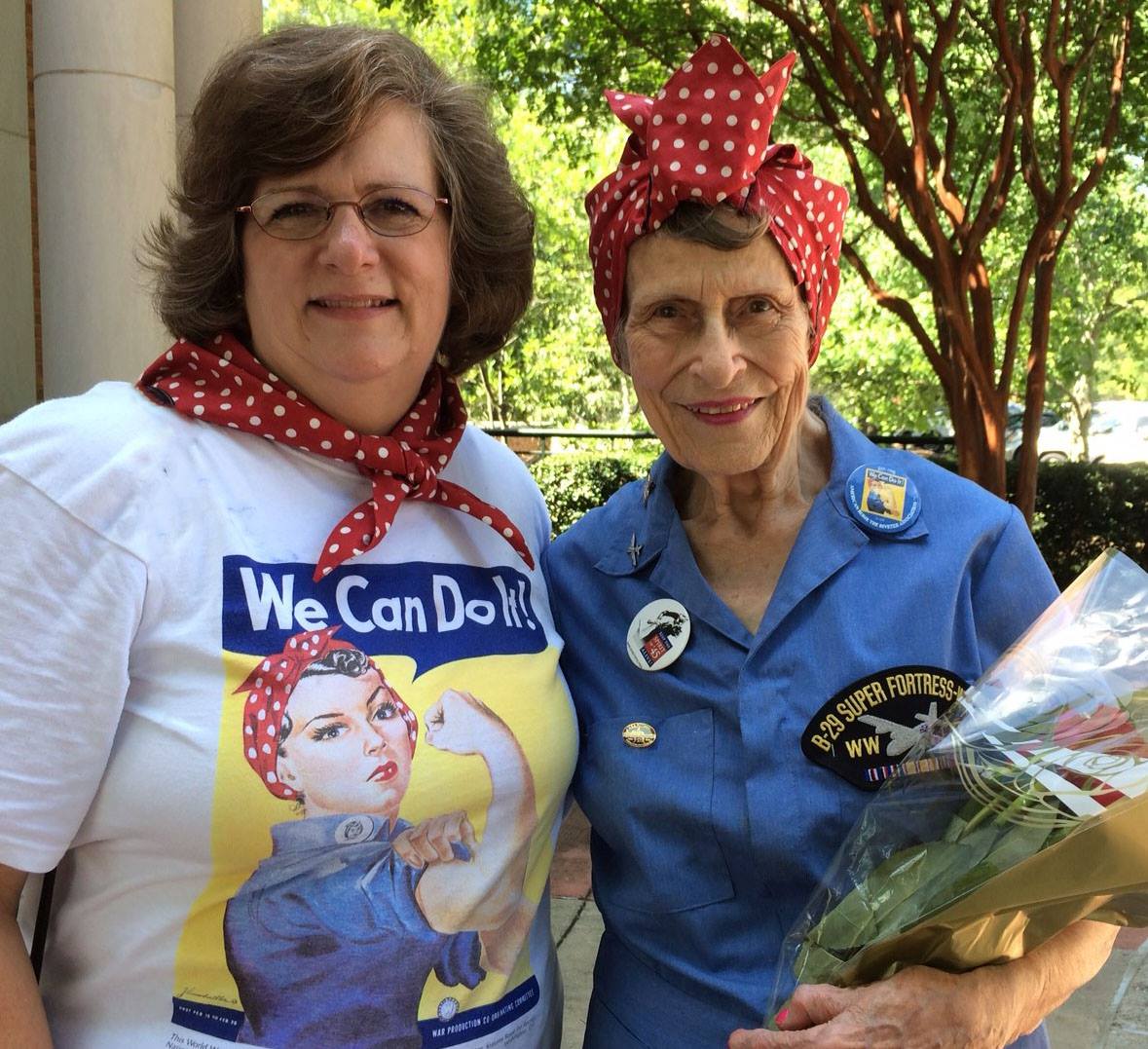 PRESS RELEASE – The women who worked at the factories to produce warplanes and war materials in the 1940s will be honored Sunday, April 19 with “Rosie the Riveter Day” at World War II Heritage Days, hosted by the Commemorative Air Force (CAF) Dixie Wing at Atlanta Regional Airport – Falcon Field (KFFC), in Peachtree City. Several women who participated in the war effort will be present to talk about their experiences, and anyone who is interested is invited to dress the part with traditional clothing worn by Rosie the Riveters. “We hope this Rosie the Riveter Day provides greater recognition for the critical role women played in World War II, and we hope many other attendees will honor them by dressing the part for the day,” said Wing Leader Jim Buckley. All Rosie the Riveters are invited on Sunday for a group Rosie photo op at 2pm.

The two-day event April 18 and 19 also will celebrate the 70th Anniversary of the Allied victory and end of the Second World War in 1945. The program, from 9 a.m. to 4 p.m. Saturday and 11 a.m. to 4 p.m. Sunday, provides a living history experience unique to the state of Georgia, bringing together historic aircraft, vintage military vehicles, antique cars, educational displays and demonstrations, including mock military ground battles staged by war re-enactors.The CAF Dixie Wing’s fleet of WWII aircraft will be on display for the 12th annual World War II Heritage Days weekend. Visitors will see the Wing’s Corsair, P-51 Mustang, SBD-Dauntless dive bomber and other restored aircraft. Rides on these aircraft and a rare B-24 Liberator bomber flying in from Texas can be scheduled in advance by visiting www.wwiidays.org.

The CAF’s B-24, “Diamond Lil,” one of only two still flying, is scheduled to arrive at Falcon Field on Friday, April 17. The B-24 was used by the United States, Great Britain and Canada during World War II and ended the war as the most produced heavy bomber, with 18,400 copies built.  The B-24 also holds the record for the most-produced military aircraft in American history. The B-24 is the same type of aircraft featured in the recent hit movie, “Unbroken.”Former B-24 crew members and other World War II veterans will be on hand to share their experiences through a series of panel discussions. Joining the airmen will be Mustang and Corsair pilots; award-winning author Bruce Gamble, noted for his series of books on the famed Black Sheep Squadron; women veterans and Rosie the Riveters.

Saturday night, “Keep ‘em Flying”, a World War II-theme hangar dance and dinner, will recreate the magic and romance of the Big Band era. Dance guests will hear the Peachtree Jazz Edition perform classics made famous by Glenn Miller, Tommy Dorsey and Benny Goodman.  Described as “one of the best bands in Atlanta”, the Peachtree Jazz Edition will be joined by the Freedom Belles, a female trio that performs songs by the Andrews Sisters and other stars. World War II veterans will be hosted as guest of honor.Proceeds from the dance cover costs associated with hosting WWII Heritage Days, as well as the ongoing preservation of the group’s historic aircraft and “Education Through Living History”, a World War II history program made available by CAF Dixie Wing volunteers to schools and youth groups free of charge.

Suggested donation for WWII Heritage Days is $5. World War II veterans, active duty military in uniform and children 5 and under are admitted free. WWII Heritage Days will take place rain or shine. Please no pets. Tickets for “Keep ‘em Flying” are $55 before April 13th, $65 at the door. Reserved tables and group discounts are available. All ticket sales are final. For more information, please visit www.wwiidays.org or call 678-364-1110.