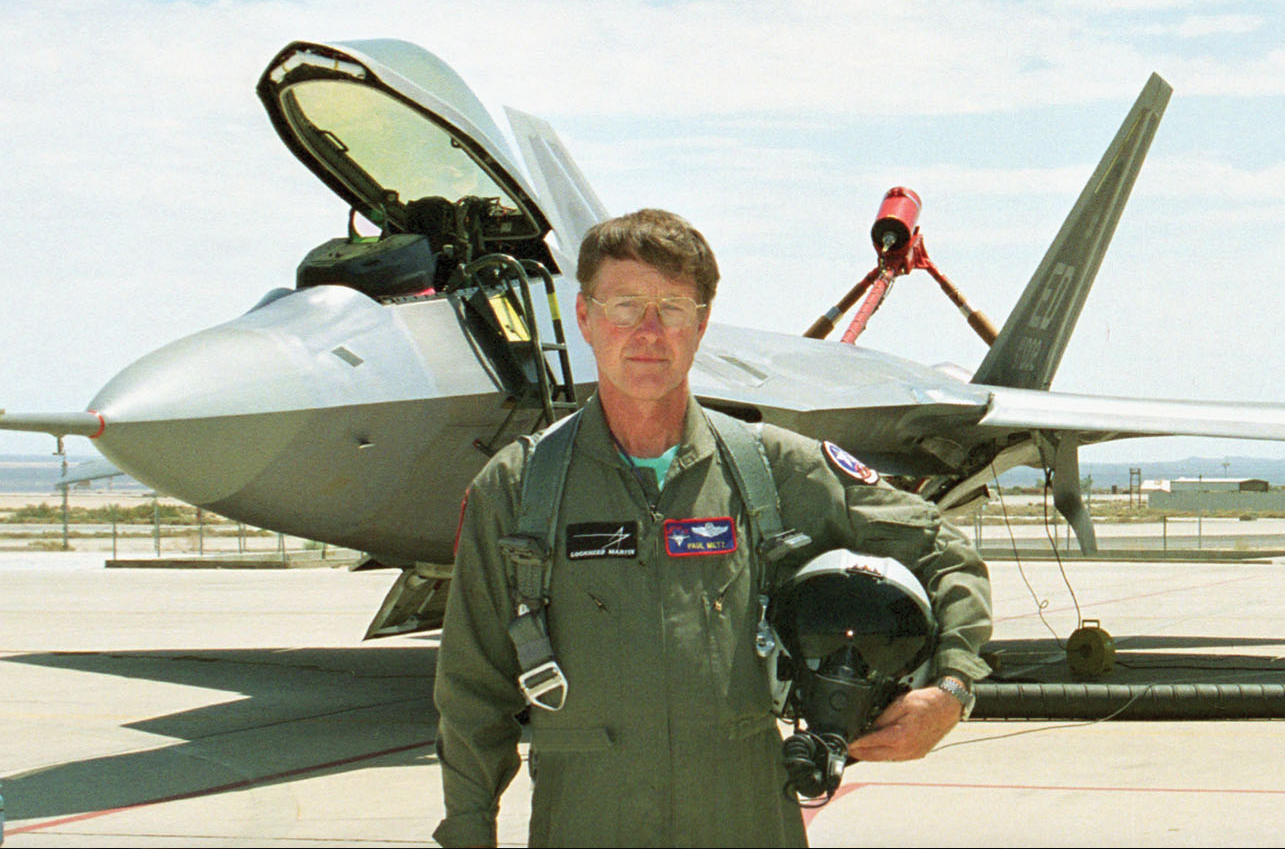 PRESS RELEASE – Former test pilot Paul Metz will present “The First True Stealth Fighter: Evolution of the F–22 Raptor,” during a free lecture on Dec. 1 at 7:30 p.m. at the National Museum of the U.S. Air Force.Metz’s talk will trace the military, geo–political and technical forces that drove the more than 30–year search for an Advanced Tactical Fighter (ATF). He’ll also cover the development and design challenges of building the operational version of the Raptor, including the first test flights of the aircraft with a particular emphasis on the third Raptor, which is now on display in the museum’s second building.Until its introduction, the characteristics of an “invisible” fighter had not been achieved by any aircraft designed solely for air–to–air combat. The requirement for such a machine was driven by the events of the Vietnam War and the major advances in our adversaries’ defensive weapons. It had become impossible to enter heavily defended enemy air space and survive using conventional fighter technologies. An entirely new approach was required and the F–22 was a revolution in combat aircraft.

Metz entered the U.S. Air Force in 1968 and flew operational missions in the F–105G Wild Weasel in the U.S. and Southeast Asia. He flew 68 missions over North Vietnam and took part in the pivotal “12 Days of Christmas” raids in December 1972. His combat day and night missions against surface–to–air missiles and anti-aircraft gun sites in support of strike missions in North Viet Nam earned him two Distinguished Flying Crosses and six Air Medals. In 1976 he was a distinguished graduated from the USAF Test Pilot School at Edwards AFB, Calif., and he remained at Edwards AFB until 1978 when he became an instructor pilot at the U.S. Navy Test Pilot School at Patuxent River, Md.Two years later, he joined Northrop Aircraft as an Engineering Test Pilot conducting flight tests on the F–5E/F, the F–20 and the Antonov Colt (a Russian bi–plane).

In October 1985, he was appointed Chief Test Pilot for Northrop Aircraft and was responsible for flight tests of the F–20 Tigershark, the RF–5E Tiger Eye Reconnaissance Aircraft, the F–86F Saber and other programs. He and his staff of test pilots worked closely with the engineers in the detailed design of the YF–23, the Northrop–McDonnell Douglas entrant in the ATF prototype program, and he made the first flight of the YF–23A ATF in August 1990. He also spent two years as an engineering test pilot on the B–2 bomber program.From 1992–2001, he served as Lockheed Martin’s Chief Test Pilot for the F–22 ATF, and made the first flight on the F–22A Raptor on Sept. 7, 1997. He and a staff of test pilots worked closely with the engineers on subsystem design, flying qualities, simulation, avionics, cockpit layout and man–machine interface. He then served on Lockheed Martin’s F–35 Joint Strike Fighter program and was named the Vice President for Integrated Test and Evaluation, overseeing a 1600–person, $750 million dollar flight test organization for the U.S. Air Force, U.S. Navy, U.S. Marine Corps and seven other countries until his retirement in February 2006.

From 2008–2010, he served as Vice President and Chief Test Pilot of Rocketplane Global, Inc., a privately held company building suborbital vehicles for space tourism. Today, he continues to work as a consultant on various aviation projects, and writes and speaks about flight test of modern fighter aircraft.During his career, Metz has accumulated over 7,000 flying hours and more than 37 years of experience flying 70 types of aircraft. He is a Fellow and past president of the Society of Experimental Test Pilots; a recipient of the Kincheloe Award (the test pilot profession’s highest award) for his flight testing of the YF–23 ATF prototype; enshrined in the Aerospace Walk of Honor at Lancaster, Calif.; and has been inducted into the U.S. Air Force Gathering of Eagles.

For more information or handicapped seating arrangements during the event, contact the museum’s Special Events Division at (937) 255-1743. Filming or videotaping the presentation is prohibited.