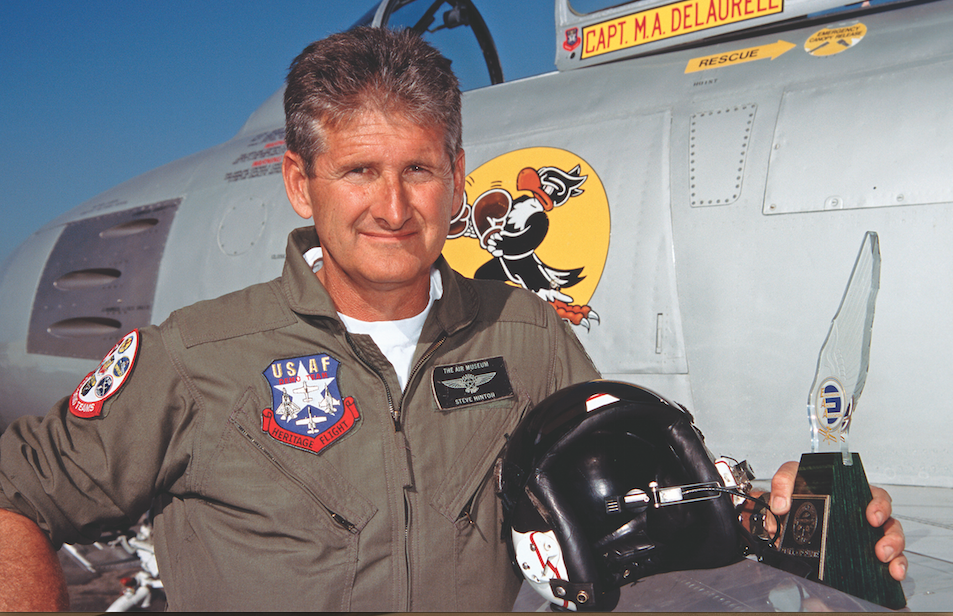 PRESS RELEASE – Aviator Steve Hinton was named the recipient of the 2014 Lloyd P. Nolen Lifetime of Achievement in Aviation by the Commemorative Air Force (CAF) 30th Annual Wings Over Houston Airshow. In addition to performing in a North American F-86F Sabre (Sabrejet), America’s first swept wing fighter jet, Hinton serves as president of the Planes of Fame Air Museum and is the owner of the aircraft restoration company Fighter Rebuilders.“Steve has led an impressive career that embodies a lifelong passion of aviation and is one of our great ambassadors for aviation history,” said Bill Roach, airshow director. “Since Steve first fell in love with planes, he has shared his passion with others, wowing people with his airshow and racing performances but also through his warbird restoration work and his leadership role at one of America’s premier aviation museums.”

Hinton began working with planes as a teenager at the Planes of Fame Air Museum, where he helped with aircraft restoration and maintenance. In 1971, he earned his private pilot’s license. By 1975, at age of 23, he began his career in Unlimited Air Racing, winning an impressive six Unlimited victories, including two world championships at Reno in 1978 and 1985. He also held a world speed record for a piston-powered propeller aircraft from 1979-1989.Hinton’s additional experience and accolades are extensive. Having flown over 120 types of aircraft, Hinton he has accumulated over 11,500 civilian flight hours and over 9,000 hours as pilot in command of The Warbirds. Since 1972, he has performed in numerous airshows in the United States, Europe and Japan. Hinton also serves as the pace plane pilot at the Reno Air Championship Races and has performed as a member of the U.S. Air Force Heritage Flight demonstration group since 1999 and as a member of the The Horsemen Flight Team since 2011.

In 2005, Hinton was inducted into the EEA Warbirds Hall of Fame and, in 2010, received the ICAS Art Scholl Showmanship Award.Hinton is also a member of the Screen Actors Guild and a charter/board member of the Motion Picture Pilots Association, serving as a motion picture pilot and coordinator on iconic sets such as The Aviator, Waterworld, and Pearl Harbor, to name a few.