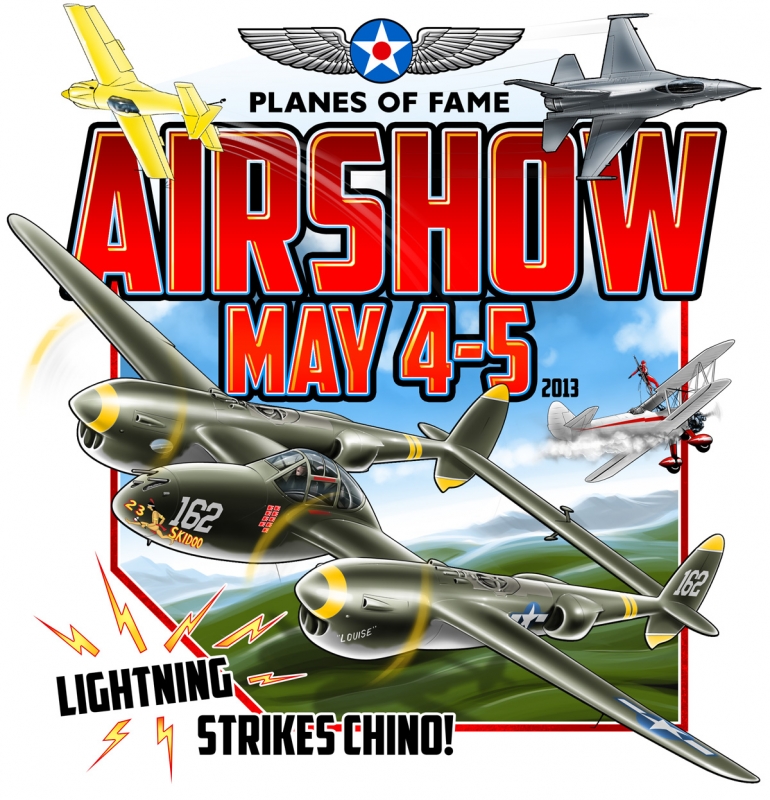 The Planes of Fame 2013 Air Show in Chino, California is taking place May 4-5 with a special preview day on May 3. This year’s show is entitled “Lightning Strikes Chino!” and will celebrate the Lockheed P-38 Lightning and the pilots that flew them.

The P-38 Lightning is one of the most easily identifiable planes of World War Two, with its distinctive twin booms and a single central nacelle containing the cockpit and armament. It was also an extremely versatile aircraft, serving in every theatre of the war in a number roles including dive bombing, level bombing, ground-attack, night fighting, photo-reconnaissance missions and as a long-range escort fighter. Its guns, mounted in the nose eliminated convergence issues that accompanied the then more-standard wing mounted guns, giving a longer range of fire and a buzz-saw effect when the stream of projectiles found their target. Over 10,000 of these planes were produced between 1941 and 1945 and it was the only US fighter produced continuously for the entire war. Today there are believed to be under a dozen airworthy examples left and Planes of Fame is hoping to have three to five Lightings in flight for the show.

Opening at 8AM on May 4th, the air show is scheduled to feature aerial performances by Clay Lacy in his Learjet, Sean D. Tucker in his Challenger II biplane, Rob Harrison in his Zlin 50LX “The Tumbling Bear”, Brian Sanders in his Hawker Sea Fury FB.11 “Argonaut” and the Silver Wings Wingwalking Team. There will also be Korean War and Pacific Theatre air battle reenactments as well as flybys that will include several North American P-51 Mustangs, a Yakovlev Yak-3, Douglas SBD Dauntless, Grumman FM-2 Wildcat, F8F Bearcat, F6F Hellcat, TBM-3E Avenger, F7F-3N Tigercat, J2F-6 Duck, Vought F4U Corsair, Curtiss P-40 Warhawk, Douglas AD-6 Skyraider, Republic P-47G Thunderbolt, North American B-25 Mitchell, SNJ-5/T6, Stearman PT-17 Kaydet and the Planes of Fame Museum’s Northrup N-9M flying wing prototype. There will be a veterans discussion panel, military vehicles, aircraft static displays, warbird rides, food, entertainment and even rides for the kids in what looks to be one of the best West Coast events of the season.

by Stephen Chapis The first generation series of experimental X-1 rocket-propelled aircraft is arguably the most famous set of X-Planes to ever shatter the silence in the skies over California’s Mojave desert; the Bell Aircraft Company […]

Handley Page Victor Goes on Display at The IWM Duxford

After five years of painstaking work by the conservation team at Imperial War Museum Duxford, Handley Page Victor B.1 XH648  is now complete and on permanent display within the museum’s Conservation Hall. Last week, the [...]