In February 2021, the Ocala, Florida-based American Honor Foundation (AHF) added Vought F4U-4 Corsair BuNo 97359 for their collection. As many readers know, this aircraft is one of the more famous Corsairs flying today, as it’s a Korean War combat veteran, one of the stars of Baa Baa Black Sheep, and it graced the pages of Warbird Digest in 2012, when then-85-year-old Charles Joseph “Obie” O’Brien, CDR, USN (Ret), who flew it on three of his twenty-four combat missions, flew it once again in the skies over Ramona, California. At that time, it was under the ownership of Doug Matthews, who later sold it to Oklahoma resident, Trent Latshaw in 2013.

When AHF officials acquired the aircraft, they wanted to use it to tell the story of a Corsair veteran who flew the type in combat. For over a decade the aircraft was painted to represent F4U-4 BuNo 82050, which Thomas Hudner had flown on his Medal of Honor mission on December 4, 1950. When AHF learned of Obie’s story though, the decision was made to repaint the aircraft as it appeared when Obie, who was attached to Fighter Squadron Forty-Four (VF-44) Hornets, flew the aircraft from the flight decks of USS Lake Champlain (CV-39) and Boxer (CV-21) in June and July 1953.

The Corsair was delivered to John Mosley’s Hangar 360 Aircraft Services at John Bell Williams Field (KJVW) in Raymond, Mississippi on May 9, 2021, and in just nine short weeks, a crew of six stripped off the VF-32 markings and applied the markings of Obie’s VF-44 using photos supplied by the author ( HERE you can read our article). The aircraft was completed on July 9, and a week later, Mark Murphy flew the Corsair directly to Oshkosh from Mississippi. On July 26, the Corsair was one of three AHF fighters to be featured on the first day of Warbirds In Review (WIR). Obie was unable to make the trip to Oshkosh, so a video interview conducted by the author at the Military Aviation Museum (MAM) in Virginia Beach, Virginia, was shown in lieu of him appearing in person. 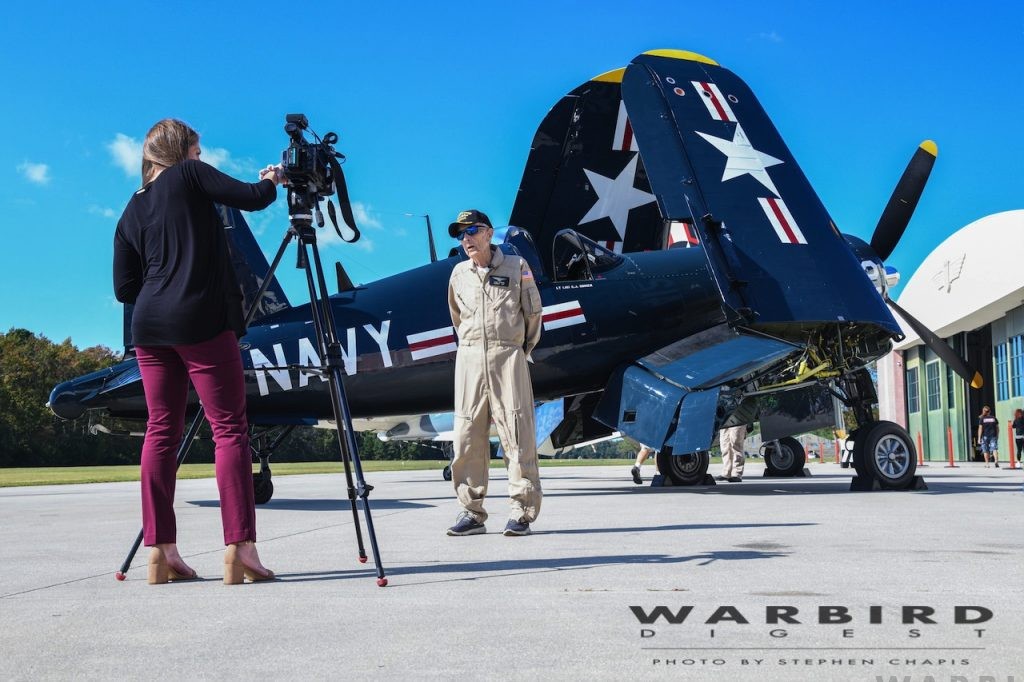 Since Obie wasn’t reunited with “his” Corsair at AirVenture, AHF vowed to fly the aircraft from Ocala to Virginia Beach, so Obie could see his old combat steed in its proper markings, complete with his name on the canopy rail. It took a couple of months but on Sunday, October 24, 2021, schedules, weather, and aircraft maintenance status came together perfectly in Virginia Beach. When Obie and his daughter Erin arrived at the museum, where Obie was, and still is known as “The Corsair Guy”, the F4U-4 had been placed in the center of the ramp next to MAM’s FG-1D (BuNo 92508), in which Obie logged over 100 hours in during his 14 years of flying at MAM.

For several hours Obie posed for photographs, spoke to his old friends from MAM, fielded questions from museum visitors, and was interviewed by WTKR Channel 3’s Erin Miller. Then, at 3:00 pm, the ramp was cleared and Mark Murphy and Mike Spalding climbed into the F4U-4 and FG-1D respectively, and roared into the crystalline Virginia skies for a brief flight demonstration. Spectators were thrilled at the sight and sound of a pair of Bent Wing Birds over the museum, but none more than Obie as he had a personal connection with both aircraft. Since the day was about reuniting Obie with the F4U-4, his association with MAM’s FG-1D was lost somewhat. That aircraft was equally special to him because the last time Obie took to the skies as a pilot in 2017, it was fittingly at the controls of MAM’s Corsair.

After the fly-bys were completed, Murphy and Spalding, went “feet wet” to join up with Richard Henshaw and the author in Henshaw’s SNJ for a few photographs of Obie’s Corsairs in formation together over the Atlantic Ocean.

The author would like to thank the American Honor Foundation, MAM Director Keegan Chetwynd and Chief Pilot Mike Spalding, MAM’s volunteers and docents, and Richard Henshaw for their efforts in honoring The Corsair Guy.