The National Warplane Museum (NWM) in Geneseo, New York has just announced that they will no longer be flying the late David Tallichet’s Boeing B-17G Flying Fortress 44-83546, and will be returning the aircraft to the legendary warbird collector’s estate. Known as The Movie Memphis Belle, because of the markings the aircraft gained during the making of the 1988 war film, Memphis Belle, this B-17 has long been associated with Geneseo, regularly appearing at their air shows from the late 1980s onwards, and finding a semi-permanent home there in 2016, when the NWM leased the aircraft from Tallichet’s heirs.

The NWN released the following statement regarding their decision on Monday, January 27th, although their document actually is dated for the 27th… 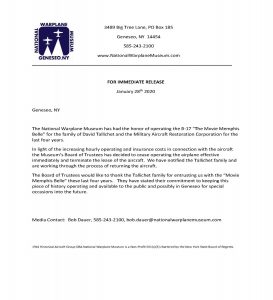 “The National Warplane Museum has had the honor of operating the 8-17 “The Movie Memphis Belle” for the family of David Tallichet and the Military Aircraft Restoration Corporation for the last four years.

decided to cease operating the airplane effective immediately and terminate the lease of the aircraft. We have notified the Tallichet family and are working through the process of returning the aircraft.

The Board of Trustees would like to thank the Tallichet family for entrusting us with the “Movie Memphis Belle” these last four years. They have stated their commitment to keeping this piece of history operating and available to the public and possibly in Geneseo for special occasions into the future.”

It is important to note that the B-17 is not being grounded, just that the NWM has decided they can no longer justify the resources necessary to both lease and operate the aircraft. Presumably, the aircraft will find another home where she will continue flying, but this is not a given, sadly, in today’s environment.

This unfortunate news follows a similarly disappointing announcement from the Lone Star Flight Museum (LSFM) in Houston, Texas last week. They have also decided to cease flying their B-17G – at least for the rest of 2020. In their statement of Facebook last week, they too noted rising costs as a major factor in their decision…

“Due to rising operational expenses, following this Saturday’s flights, there are no further plans to fly the B-17 for the remainder of 2020.”

“We appreciate all of your comments and concerns. The B-17 is not retired or grounded, we have only suspended flying for the remainder of this year. We will maintain the B-17 in airworthy condition and will evaluate flying status at the end of the year. Our B-17 is an important part of our warbird collection and will continue to be on display at the museum and open periodically for tours. We hope you all visit the museum very soon to see it and the other aircraft we have on display.”

Thunderbird made her last official flight of 2020 this past Saturday, when she performed a number of experience rides with paying customers. We will keep our readers informed of any other developments in these stories as and when they arise.