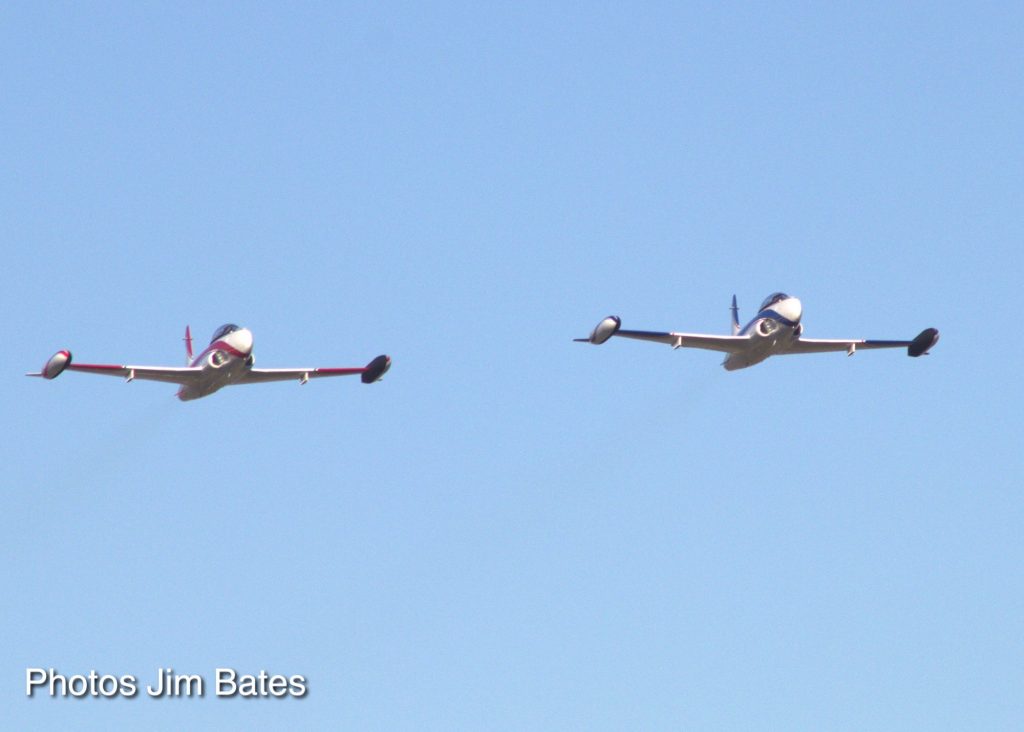 Boeing started operating the Canadian built CL-30 Silver Star in 1976, mostly for sensor and missile guidance testing, but more recently the aircraft were used as chase planes for airliner test-flights.  The two T-33s which appear in the background of many flight test photos of the 767, 777, and 787, were later supplemented in flight test operations by two supersonic Northrop T-38 Talons.  Unfortunately, all good things must come to an end and it was the difficulty of sourcing ejection seat rocket motors that led to Boeing retiring the T-33s in 2020.  But Boeing will stay in the vintage jet business, replacing the two T-birds with a pair of Douglas TA-4 Skyhawks in the near future.

The “Red Bird” (N109X) was built as c/n T-33-298 by Canadair at the Cartierville Airport, in Quebec, being taken on strength by the Royal Canadian Air Force in May 1954 as a Silver Star 3PT (pilot trainer) RCAF serial no. 21298.  The jet was only operated by the RCAF for ten years; being struck off strength in May of 1964.  During its time with the RCAF, it was flown by 104 KU (Communication Flight) at RCAF St. Hubert,  Quebec, and then placed in storage with 6 RD at RCAF Mountainview.  The aircraft was sold to Warren Speed Shop of Toronto in 1965 and given the Canadian civil registration CF-SJZ.  Not long after, it moved to the United States and was assigned the US registration N109X, passing through owners such as Omni Investment Corp, Aeronautical Specialties, Flight Test Research, and Wally McDonnell.  Purchased by Boeing on March 10, 1976, the “Red Bird” was originally used for ALCM cruise missile guidance system testing, often operated at low level to simulate cruise missile flight profiles.  Along with the “Blue Bird”, the “Red Bird” was transferred from the Boeing Equipment Holding Company to Boeing Logistics Spares Inc. on November 16, 2000.

The “Blue Bird” (N416X) was built by Canadair as c/n T-33-369 and was taken on strength by the RCAF during August 1954 with RCAF serial no. 21369.  Also a Silver Star 3PT, it was operated by 3 Advanced Flying School to train RCAF and NATO pilots, landing gear up at RCAF Gimli, Manitoba, on June 5, 1956.  Repaired by Northwest Industries of Edmonton, Alberta, it returned to service with 4 Advanced Flying School at RCAF MacDonald, Manitoba, and then moved on to 2 AFS at RCAF Portage la Prairie, Manitoba.  It was struck on strength by the Canadian Armed Forces on November 10, 1970 and placed in storage in Saskatoon, Saskatchewan.  During 1973, it was sold to Leroy Penhall/Fighter Imports in the US and registered as N12416.  In 1972 it was sold to Ed Fisher and then to Boeing on April 18, 1980.  The “Blue Bird” was purchased for use in testing anti-tank missile sensors and then moved over to the civil chase plane side of the company.  Boeing had the N number changed to N416X on February 11, 2000 and it too was transferred from Boeing Equipment Holding Company to Boeing Logistics Spares Inc on November 16, 2000.

No final decision has been made regarding the final disposition of the T-33s, but it is planned that they will be donated to Museums.

Special thanks to Jeff Rankin-Lowe and Pat Martin for assistance with the aircraft histories.