On december 9, 1951 Italy’s first true jet, the Fiat G.80, took the skies for the first time. The Fiat g.80 represents the first  jet aircraft completely designed in Italy which saw production, albeit without the commercial success guaranteed entry into service with the Air Force. His subsequent developments, the G.82 and G.84, they could carve out a place in the middle of training camp, but had no success in their time for various reasons.

The G.80 was a single engine, two-seat trainer of the same class of the Lockheed T -33 “Shooting Star” . Designed by Fiat’s Giuseppe Gabrielli, as advanced trainer , it was designed as a night fighter variant and a single-seater for the ground attack and reconnaissance . Despite the good behavior in flight, the G.80 did not show interesting performances and It was evaluated by the Air Force Flight Test Unit at  Practice Mare ( Rome ), without receiving a successful evaluation. In fact it was  built in only five aircraft . To the two prototypes – the first of which flew in Amendola (Foggia ) December 9, 1951 – followed three  production aircraft.From the G.80 Fiat developed the Fiat G.82 ( first flight May 23, 1954 ) which was  built in  two prototypes and four pre-production aircraft.s. These were effectively used by the School of Turbojets located over  Amendola Air Base until  in 1957 when  they were then assigned permanently to the Reparto Sperimentale Volo ( Air Force Flight Test Unit) . 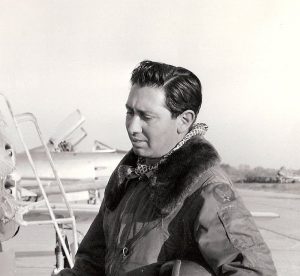 The test Pilot of the G.80 was Vittorio Sanseverino, an Italian aviation legend. Vittorio Sanseverino (1917–2010) was an Italian pilot. Besides his combat experience known for having test-flown a large part of the aircraft built by FIAT for the postwar Italian Air Force, including the Fiat G.91, the Fiat G.222, the North American F-86D Sabre and the F-104 Starfighter.

The design competed in the 1955 NATO trainer competition held in France, but was not successful.