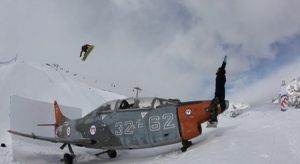 Livigno, in the province of Sondrio in the Italian Alps has added a new attraction to its snowboarding course, it’s a Fiat G.91 fighter jet.

In addition to a long, 35 year service life in the armed forces of European NATO members, for many years the G.91 was the plane used by Italy’s Frecce Tricolori for their acrobatic flying demonstrations from 1964 to 1981 when they moved on to Aermacchi MB-339s.

The plane was placed by the operators of the resort as an item of interest on the slopes and is situated in such a manner as to tempt the adventurous to jump it. Seems like a perfect setup for stories about one’s slope-incurred injuries; who wouldn’t be impressed by a story of colliding with a plane while making a jump?