Inside issue #86 of Warbird Digest.

Working Warbirds – SKY TRUCKINʼ CONVAIRS – Some ex-military aircraft must earn their keep to ensure survival. That is the case with Conquest Air Cargoʼs C-131s based in Florida, plying the highway in the sky.

Flight Check – COLD WAR PHOENIX -This Cold War-era trainer is hot! Strap in for a ride in an immaculately restored L-39.

AFFIRM-ATIVE ACTION! There has been a resurgence of Hellcats brought back to airworthy condition lately, and the latest to take flight following restoration is the Collings Foundationʼs unique -3N variant, originally built to be a nocturnal nemesis to the Japanese!

STILL FLYING – Doug Matthews gets nostalgic, waxing lyrically about Americaʼs first jet, and takes Warbird Digest readers along for a flight in this iconic trainer, the T-33.

STORCH OVER NORWAY – This lovingly restored Fieseler Storch routinely flies the skies of Norway, as many did when that country was occupied by the Germans during World War Two.

BERLIN AIRLIFT @ SEVENTY – A massive effort was expended in bringing food and supplies to the beleaguered citizens of West Berlin during the Soviet blockade. Those efforts were recently commemorated in a salute to the Berlin Airlift on the 70th anniversary of that event. 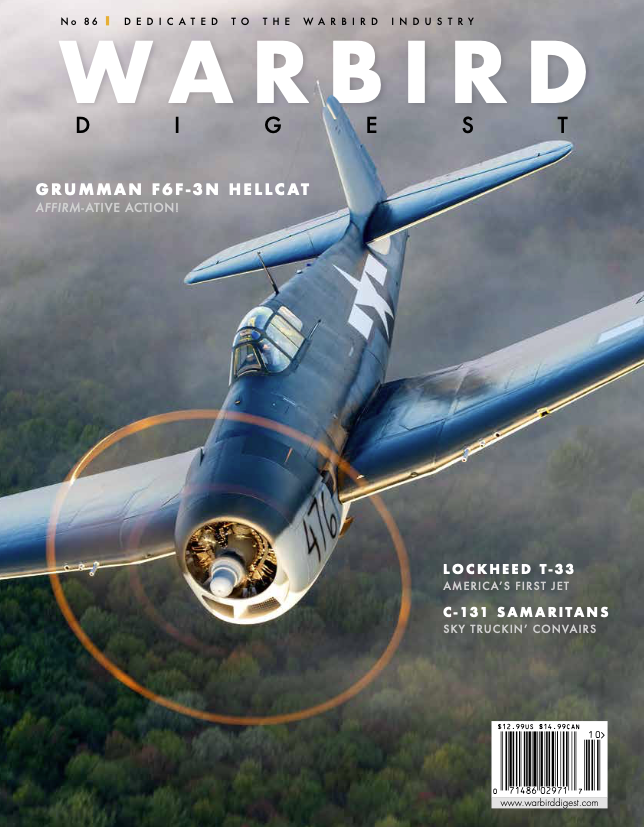