Have you ever flown in a Huey helicopter with the doors wide open and the wind rushing over your face?  You will have that opportunity at the Hillsdale Airport on Sunday, September 11th, during the Patriot’s Day Fly-in to honor first responders and veterans.  Kick the day off at 7 am with jam-packed activities including breakfast, airplanes, classic car cruise-in, food trucks, military displays, and a veteran ceremony.

For only $99.00, you can take a thrilling 10-minute flight with doors wide open (weather permitting).  You can book your ride/time in advance or take a chance and walk up that day. To order tickets in advance visit  www.yankeeairmuseum.org and click “Fly With Us,” scroll down the page to find the UH-1 Huey or just walk up at 10:00 am to see what’s available.

The Yankee Air Museum Huey Greyhound served in the Vietnam War from 1967 until 1971.  It was part of the 240th Assault Helicopter Company known as The Greyhounds, Mad Dogs, and Kennel Keepers. The Greyhound Bus Company was honored by the name and gave the company permission to use its logo.  A versatile helicopter, the UH-1 was used as a gunship, medical evacuation, and for utility purposes.

It was the fall of 1967 when Greyhound Lines, Inc. first received a letter from Vietnam that would mark the beginning of a cherished friendship between the transportation provider and the members of the 240th Assault Helicopter Company.  Known as the “Greyhounds,” the 240th AHC was led by Major Glenn Hoffman who wrote the company a heartfelt request for support during the Vietnam War. “Because we are a new unit, we had to select our own unit symbol and call sign for identification,” wrote Hoffman. “After several discussions, we decided to call our unit the ‘Greyhounds,’ based on the idea of speed and dependability and in line with the famous Greyhound buses – safety and service to our passengers.” Greyhound was moved by the request for support and delivered running dog logo decals to the 240th AHC which they displayed prominently on their helicopters, vehicles, and company signs.  The brave members of the 240th AHC completed over 12,500 missions and flew over 76,000 troops from July to November of 1967, serving as true heroes while leaving a unique mark on Greyhound’s history. 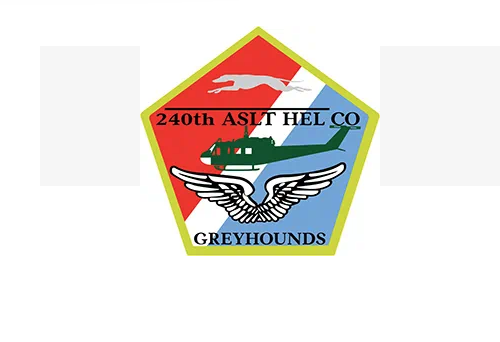 Huey rides and the Veterans Appreciation Day are located at the Hillsdale Airport at 1727 Airport Road, Hillsdale, MI 49242