Unlike other European nations with significant aviation heritage, present-day Italy has struggled to develop a strong, vintage aviation community. However, that situation is changing, and one of the pioneering organizations at the forefront of this effort is the Historical Aircraft Group (HAG) which has been working hard to preserve and promote the nation’s aviation heritage for decades. The following article by two of the organization’s members, Davide Olivati and Juri Badalini, describes one of the vintage aviation events which their group helped organize in Italy…

And with this, we made 13! We are not talking about football championships, but about the thirteenth edition of the Fly Party air show, which took place at the Historical Aircraft Group’s headquarters in Bagnoli di Sopra (PD), located in picturesque, northeastern Italy. This year marked the second time which Italy’s most important historical aircraft event took place at this location, with the first having occurred in 2019 with the participation of Douglas C-41A 40-0070 (N341A) Hap-Penstance – one of the “Mighty Fifteen” C-47s and DC-3s which comprised the D-Day Squadron during their visit to Europe that year. Hap-Penstance, after celebrating D-Day’s 75th Anniversary in Normandy, had traveled to Italy along with four other aircraft from the squadron.

FLYPARTY is the HAG’s main event each year, and since its first edition in 2004, it has taken place at several different locations, arriving at the “Dominio di Bagnoli” airfield in Bagnoli di Sopra (PD) during 2019. This airfield has a 1,200m (4,000′) grass runway. In addition to HAG’s headquarters, the Ali di Bagnoli Association is also based here, which has led to a fruitful collaboration between the two aviation-minded groups. 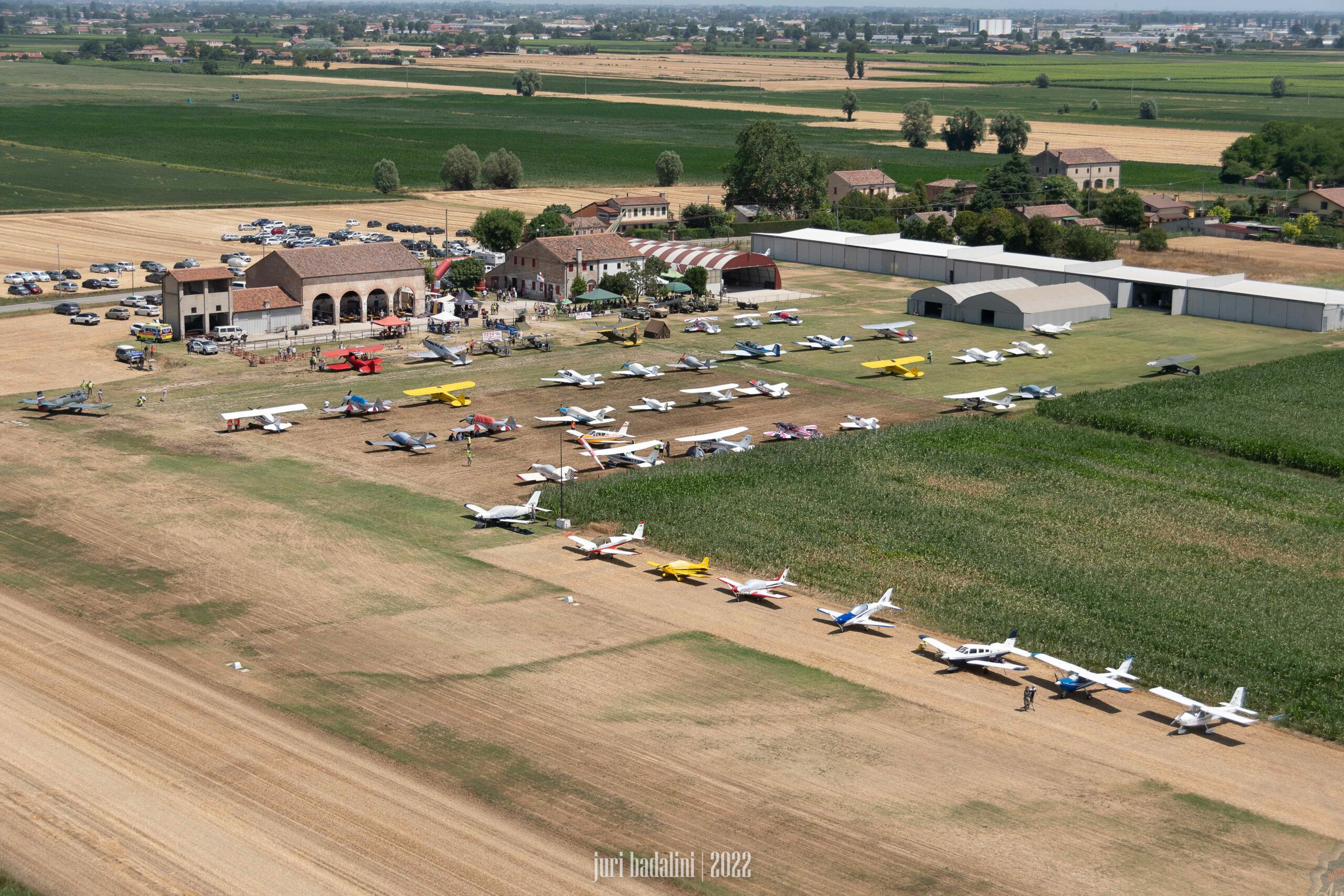 The Italian airshow scene has suffered from the consequences of the pandemic, as is true for the rest of the airshow world. So following the long hiatus, Italian aviation enthusiasts came out in large numbers to join in the fun at Fly Party 2022, despite the truly oppressive heatwave then pummeling the region. As always, the focus of the two day event remains on organization members who, by aircraft or other means, started to assemble and mingle on the Friday before the event to enjoy each other’s company.

“When I thought of the Fly Party, I had envisioned an event that went beyond the traditional aviation gathering or air show. I wanted to create an event where the human relationships and friendship became the main reason for people to attend,” HAG founder Andrea Rossetto told us. “Living your passion and sharing it with good people year after year is a special thing; airplanes come and go, but friendship is forever!”

This year’s special guest was  a former Yugoslav Air Force Soko G-2 Galeb. This single-engine, two-seat jet trainer/light ground-attack aircraft was the first jet, and indeed the first ex-military jet, to land at Bagnoli’s grass strip. The aircraft, with the classic hiss of its Rolls-Royce Viper 11 Mk.226 turbojet attracted the attention of all those present, and especially the many enthusiastic ‘spotters’ in attendance.

Between each aircraft’s display, the public was able to sooth the onslaught of the day’s scorching heat with the mugs of ice cold beer distributed by Refuel Brewing, an event sponsor, at its always crowded kiosk. We are wondering why…

For the first time, a reenactment recreating military operations at a hypothetical airfield in Vietnam was presented to the public. A ‘reconnaissance mission’ featuring Andrea Rossetto’s L-19 took place, with the pilot arriving in U.S. Army uniform aboard a Willis Jeep. He executed a classic preflight inspection and then received an escort from a “Follow Me” vehicle to the runway for his take-off.

On Sunday a flag-raising in the presence of numerous local officials formally kicked off the day’s flying activities, which opened (and closed) with a formation comprising Andrea Rossetto in his Cessna L-19 Birddog Mekong Mauler and Andrea Semeghini and Giovanni Taglietti each flying a Wolf W-11 “Boredom Fighter” biplane. The well-established trio always provokes a great emotional response from the crowd for the complexity, precision and consistency of their maneuvers, making the most of the flight characteristics of very different airplanes. 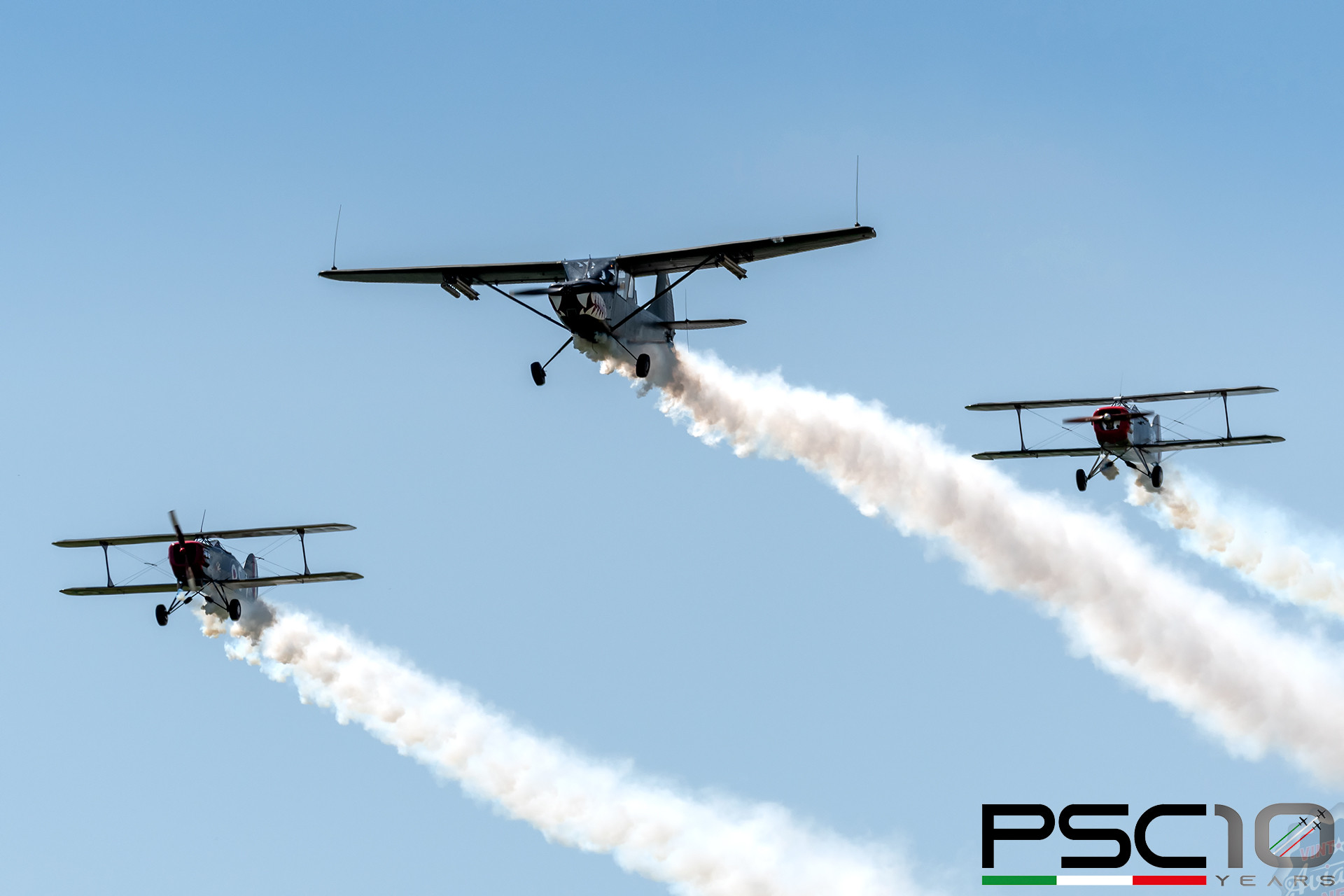 Following the trio came numerous other performance from aircraft such as the Fiat G.46, which belonged to the late Pino Valenti, flown with elegance and skill by Mario Cotti, Dominiqe Bonucchihe’s Yak-50, Gianfranco Caprai and Umberto Bertolotti’s Yak-52,  Maurizio Costa and Francesco Fullin’s Pitts, Filippo Colnaghi’s Stampe SV.4, Giuliano Ignoto’s Corby Starlet (which never spares the smoke during its display!), and  Marco Mularoni’s Cap.10. There was also an unusual formation made up of two Sequoia F.8L Falcon (Piero Angiolillo’s I-EMME and Stefano Gambaro’s I-CECI) and led by Giancarlo Gusso in a Piaggio P.149D (Focke Wulf-built). Next came Roberto Marini in his flame red WACO UPF-7 biplane, evoking the more romantic aspects of flight, with the pilot exposed to the air with goggles, leather cap, and silk scarf. This contrasted significantly to Eduard Kovačić in his Soko Galeb G.2A!

As always, the ever-present Pinups in their 1940s/50s clothing kindly lent themselves to photo shoots alongside the most representative planes from this edition of FLYPARTY 2022.

Over the years, FLYPARTY has grown in numbers to become a marvelous, popular event. It is also very demanding from an organizational perspective, often taking significant time and space from the individual relationships of HAG members involved, somewhat distorting its original spirit. The return to Bagnoli cemented the desire to recover that original spirit however, a return to the original formula for the gathering, as a meeting place for HAG members from all over Italy and beyond, placing the  privilege of the show’s human aspects at its center, rather than the event itself.

Here there are no ranks or titles. No matter if you are the owner of a powerful Galeb, a small “Boredom” biplane or if you fly only with your imagination, you still feel welcomed and these days everyone relaxes; they bring out the inner child free to have fun with other “children” and with airplanes – at least for a couple of days. In Bagnoli, the party atmosphere was tangible, with endless hugs and selfies, a healthy student spirit which originally gave birth to the Historical Aircraft Group!

The public is and will always be welcome, and the more intimate spaces within the new headquarters return everything to a more human scale, bringing enthusiasts closer to airplanes and pilots, but at the same time, allowing us to maintain that party atmosphere which must distinguish FLYPARTY.

The change of location has also allowed for the creation of new relationships with different local realities in addition to the aforementioned Ali di Bagnoli: the Pro Loco and the municipality of Bagnoli (in the person of mayor Roberto Milan who became passionate about aviation and was of great help in organizing this year’s party). The mayor himself wanted to be present at the flag-raising ceremony on Sunday morning together with regional councilor Elisa Venturini. And finally, the Parish of Olmo must be thanked for hosting an excellent Saturday evening dinner!

The “Baronio” Aeronautical Technical Institute of Vicenza also played its role by allowing some of its students to service the aircraft parking lots. Assisting the local volunteers, they showed a lot of passion and desire to help and were invaluable in handling the numerous aircraft present.

We are not yet certain about the attendance numbers for this year’s event in comparison to previous editions, but we can certainly confirm that FLYPARTY is back in a great way. On Sunday afternoon, greetings and goodbyes from HAG members attending put an end to FLYPARTY 2022, and the airfield slowly returned to its normal operations. We can’t wait until we meet again next year!

Many thanks indeed to Davide Olivati of  The Aviation,  Juri Badalini and PSC for this report and for the photos! 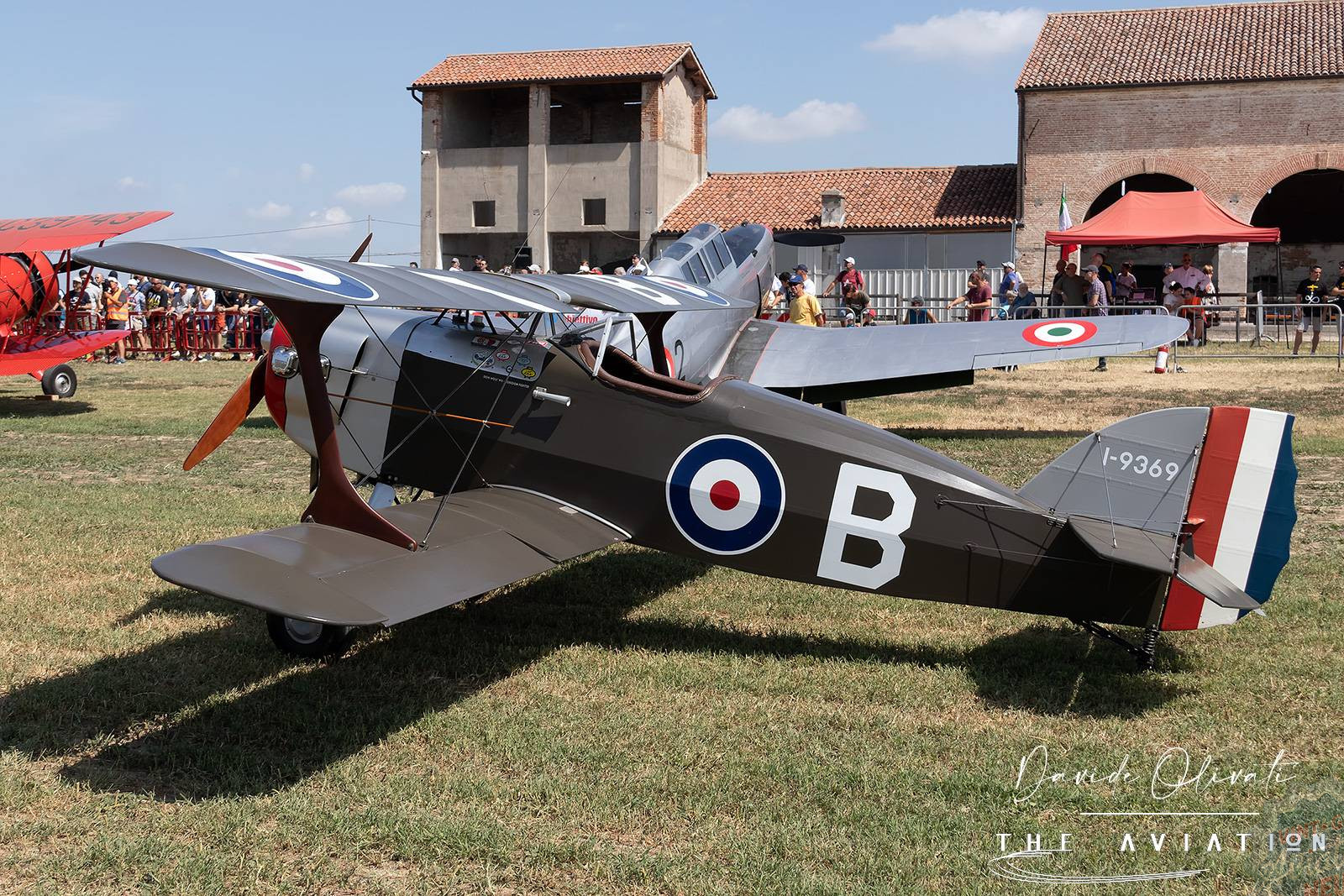