Seventy-four years ago today, the Vought F4U Corsair took flight for the first time.  A single-seat carrier-operable fighter-bomber, the F4U is generally regarded as the best shipboard fighter of World War II, garnering an 11:1 kill:loss ratio.  The Corsair was fast, tough and maneuverable but early handling problems at low speeds, coupled with a restricted view from the cockpit, made carrier landings difficult.  Because of this, the first Corsairs into combat were flown with great success by land-based Marines.  The massive 18-cylinder Pratt & Whitney R-2800 Double Wasp radial engine was the key to the Corsair’s outstanding performance.  Corsairs using bombs and rockets paved the way for the final battles at Iwo Jima and Okinawa.

Demand for the aircraft soon overwhelmed Vought’s manufacturing capability, resulting in production by Goodyear and Brewster: Goodyear-built Corsairs were designated FG and Brewster-built aircraft F3A. From the first prototype delivery to the U.S. Navy in 1940, to final delivery in 1953 to the French, 12,571 F4U Corsairs were manufactured by Vought,in 16 separate models, in the longest production run of any piston-engined fighter in U.S. history (1942–53).

Here is a photo of Dan McCue in the Collings Foundation’s F4U-5NL Corsair at the 2012 Cleveland National Air Show. 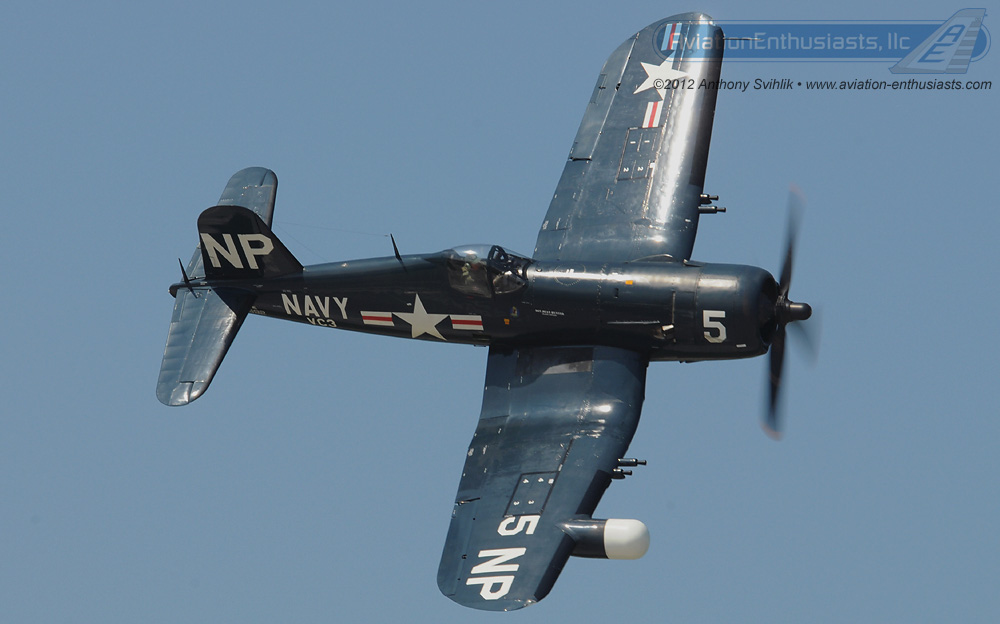