The McDonnell F2H Banshee flew for the first time sixty-seven years ago today.  Affectionately known by those who flew it as the “Old Banjo,” the F2H served the Navy and the Marine Corps as its first single-seat, carrier-based, jet night-fighter.  An F2H set an unoffical altitude record of 52,000 feet in 1949 for a jet aircraft and Banshees used the first steam catapults aboard the USS Hancock in 1954.  Used extensively during the Korean War, the Banshees’ high-altitude capabilities made them ideal for escorting Air Force B-29s on bombing missions over the north.  The Banshee had the distinction of being the first jet-powered reconnaissance aircraft built for the Navy.  Canada was the only other nation to operate the F2H, with the Royal Canadian Navy flying the type between 1955 and 1962.  The Banshee was the Canadian navy’s first operational jet and the service’s last carrier fighter.  They were the only jet-powered carrier-based fighters ever deployed by the Royal Canadian Navy.

The aircraft played a central role in the 1953 James A. Michener novel The Bridges at Toko-Ri. The subsequent 1955 movie of the same name used F9F Panthers in place of Banshees for all flight sequences, although parked Banshees are visible in the background of several scenes. At press time Warbirds news sources indicate that there are 8 Banshee exhbited across the museum in the United States: Five F2H-3, two F2H-2P and one F2H-4 . Three F@H-3 are exhibited in Canadian museums.

Here is one of our photos by Aviation Enthusiasts LLC of an F2H-3 Banshee (Bureau Number 127639) that is part of the Aviation Heritage Park display at Naval Air Station Oceana. 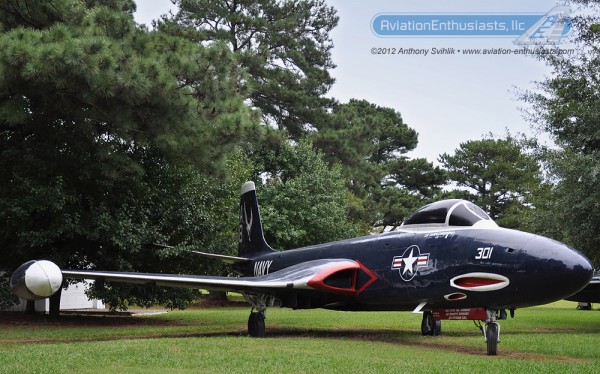