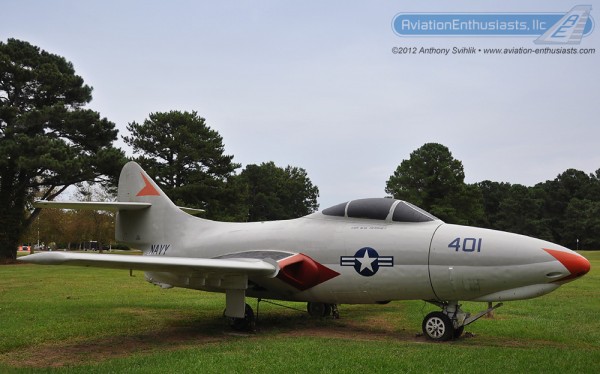 By Aviation Enthusiasts LLC
The Grumman F9F Panther flew for the first time sixty-six years ago today.  A single-seat carrier-based fighter and attack aircraft, the F9F was the first Navy jet to go to war and the first to try an inflight-refueling system.  Panthers flew 78,000 combat sorties during the Korean War and scored the first air-to-air “kill” by the Navy in the conflict, downing a North Korean Yakovlev Yak-9 on July 3, 1950.  The Navy’s first jet-versus-jet “kill” was also accomplished by a Panther when the type dispatched a MiG-15 on November 9, 1950.  Grumman built 1,382 aircraft between 1947 and 1953.  The Panther was the first jet aircraft used by the Blue Angels flight team, from 1949 through 1954.

This F9F-2 Panther, Bureau Number 123612, is part of the Aviation Heritage Park display at Naval Air Station Oceana.  Be sure to visit our full website at www.aviation-enthusiasts.com for more aviation and air show memories!