The Grumman F6F Hellcat flew for the first time seventy-two years ago today.  A single-seat carrier-based fighter, the F6F was touted as a bigger and better version of the F4F Wildcat.  The Hellcat was one of America’s best shipboard fighters, second only to the F4U Corsair.  The F6F was credited with the destruction of 5,154 enemy planes during World War II and garnered an 19:1 kill:loss ratio!  The Hellcat’s greatest single victory was in the mother of all carrier battles, the Battle of the Philippine Sea.  The battle saw the elimination of Japanese carrier air power as a factor in the Pacific War and Hellcats collected nearly 500 enemy kills during the conflict!  Grumman built 12,275 aircraft between 1942 and 1945, the largest number of fighters ever produced at a single factory.  The F6F was the premier ace-maker aircraft in the American inventory with 305 Hellcat aces.  The Hellcat was also the first aircraft used by the Blue Angels flight team, from June 1946 to August 1946.

Here is a photo of an F6F-5 Hellcat from the Southern California Wing of the Commemorative Air Force that participated in the Parade of Flight at the 2011 Centennial of Naval Aviation Kick-off Celebration at Naval Air Station North Island.  This Hellcat is in the markings of Commander David McCampbell.  McCampbell became the Navy’s all-time leading ace with 34 aerial victories during World War II. 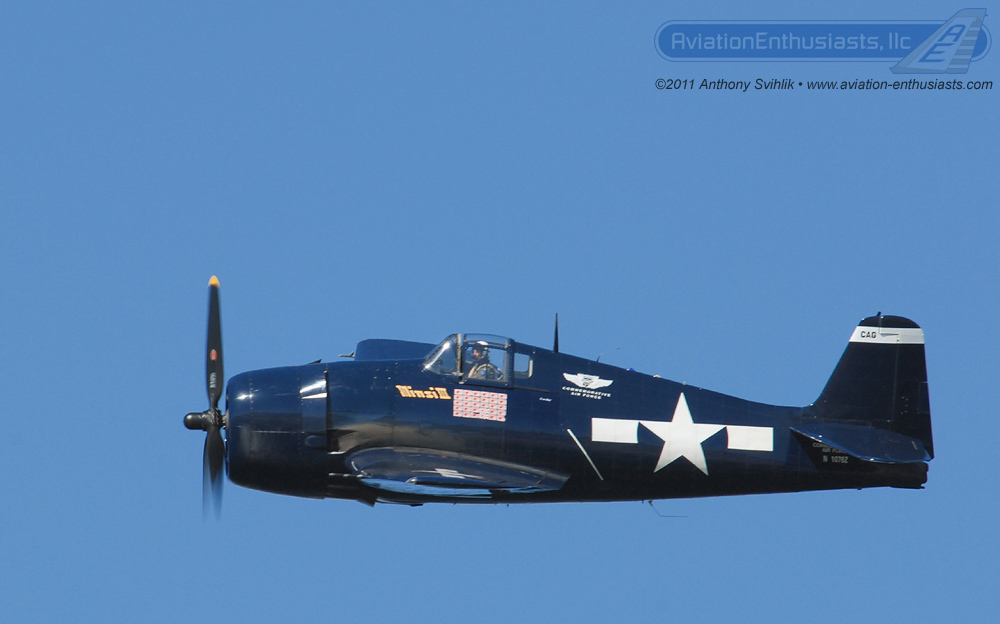