Following a five-year hiatus, Dekalb-Peachtree Airport (PDK) will host their much-missed Good Neighbor Day Air Show and Open House event on May 14, 2022. This year’s show will focus upon the 80th anniversary +1 of NAS Atlanta, its history so relevant to the present-day PDK, as the runways and a good number of the airfield’s older facilities were a part of that naval air station from 1941 until its roughly 20 miles move west from Chamblee to Marrietta, Georgia in 1959.

“We are excited to bring back our air show,” said airport director Mario Evans. “Between airport construction and COVID restrictions, we haven’t been able to organize an air show in five years. The Good Neighbor Day has become a tradition in Atlanta, and the longest-running air show in the region. We look forward to hosting families and aviation enthusiasts once again.”

Dekalb-Peachtree Airport has a rich military history. A century ago, the present-day airport’s grounds lay within Camp Gordon, a U.S. Army training base during World War I. In 1940, the U.S. Navy acquired a small tract of this land and formally commissioned it as a Naval Reserve air field by March of the following year. By the end of 1942, the base had grown so large that it became a fully-fledged Naval Air Station. During the war years, the Navy continued to expand the grounds, acquiring a considerable amount of property directly west of the airport from civilian owners, either by purchase or condemnation; they erected a number of new permanent buildings on this land.

However, despite its growth, it wasn’t too long after WWII that the demands of modern jets and large patrol bombers began outstripping what was available at PDK, both in terms of facilities and runway lengths. As a result, the U.S. Navy built a permanent Naval Air Station outpost adjoining Dobbins Air Force Base near Marietta, Georgia, to benefit from that airfield’s longer runways. As the move took place, the Navy initiated the incremental return of their now-former air station in Chamblee to DeKalb County; the airport falling fully within their control during 1959 when it became fully available for civilian use.

Two aircraft participating in the show have a direct link to NAS Atlanta’s past; CAF Airbase Georgia’s FG-1D Corsair and the Military Aviation Museum’s AD-4 Skyraider both served at Chamblee for a period following WWII. AD-4 Skyraider BuNo.123827, built in 1949, saw three combat tours in Korea, firstly with VA-55 Torpcats aboard USS Valley Forge (CV-45) where she was involved in the type’s combat debut and indeed the U.S. Navy’s first carrier strikes against North Korea on July 3rd, 1950 when VA-55 struck airfields and fuel depots near Pyongyang. ‘827’s ultimate combat cruise off the Korean coast was during the aircraft’s time with VA-75 Sunday Punchers aboard USS Bennington (CV 20). Following the frenetic action during the Korean War, ‘827 returned stateside to take up a training role with the U.S. Marine Corps’ VMAT-20) at MCAS Cherry Point near New Bern, North Carolina. In early July 1956, ‘827 flew to NAS Atlanta, where the Navy soon struck her off. She lingered there in storage until 1959 when the Navy donated the airframe to the City of Chamblee as a gate guard for the newly established civilian airfield which NAS Atlanta had once called home (the Navy having decamped to Marietta, by this point). ‘827 sat atop a pole on display for the next few years, slowly deteriorating due to neglect, until a local pilot named Dave Forrest bought it from the city in 1966. Over the next decade, Forrest, with assistance from Pat Epps, restored the old warrior back to flying condition, getting it back into the air again on December 5th, 1978. The Skyraider has been through several different owners since those days, with Jerry Yagen’s Military Aviation Museum acquiring her in September, 2000. The AD presently wears the livery of an aircraft which LCDR “Swede” Carlson flew during the Korean War while leading VA-195 from aboard USS Princeton (CV 37). (As some will remember, VA-195 gained their nickname, Dambusters, when Carlson and his men breached the heavily defended North Korean dam at the Hwachon Resevoir on May 1st, 1951, a feat which B-29 heavy bombers had failed to accomplish.)

CAF Airbase Georgia’s FG-1D Corsair (BuNo 92468) rolled off Goodyear’s production line at their factory in Akron, Ohio during 1945. Too late to see combat during WWII, the aircraft served in a variety of Stateside training units. Between 1949 and 1952, the aircraft served in the Naval Air Reserve at NARB Atlanta in Chamblee. The Navy retired the FG-1D in 1956, placing her in the boneyard at NAS Litchfield Park in Arizona. Ernest Huggins purchased the Corsair from the scrap yard in 1957, reselling the airframe during the following year to Skip Underwood of Tulsa, Oklahoma. Underwood moved the FG-1D to Buckeye, Arizona where it remained in storage until the legendary Marvin L. “Lefty” Gardner acquired it for the nascent CAF in 1960. And the rest, as they say, is history!

The rest of the aircraft lined up for the Good Neighbor Day Air Show and Open House this May is pretty impressive, and features some of the most significant naval warbirds still flying today. Including the Aeroshell Aerobat Team and the LIMA LIMA Flight Team, the list of participating aircraft features the following 33 warbirds:

“In 2017 we dedicated the air show to the 100th anniversary of Camp Gordon; this year we are dedicating to NAS Atlanta. Our goal is to always organize events with our military and aviation history in mind, while honoring the women and the men that serve our country,” noted Mario Evans.

Antique airplanes, military aircraft, and DeKalb County fire trucks and ambulances will be on display at PDK during the airport’s open house from noon until 5 p.m (gates will open at 10:00 am). While there is no admission charge, parking is priced at $15 per vehicle. The open house will  take place at the airport (formal address being 2000 Airport Rd, Atlanta, GA 30341). Cars may enter from Clairmont Road and, until 1:30 pm, from Dresden Drive as well.

For more information about the air show, please visit their Facebook page. 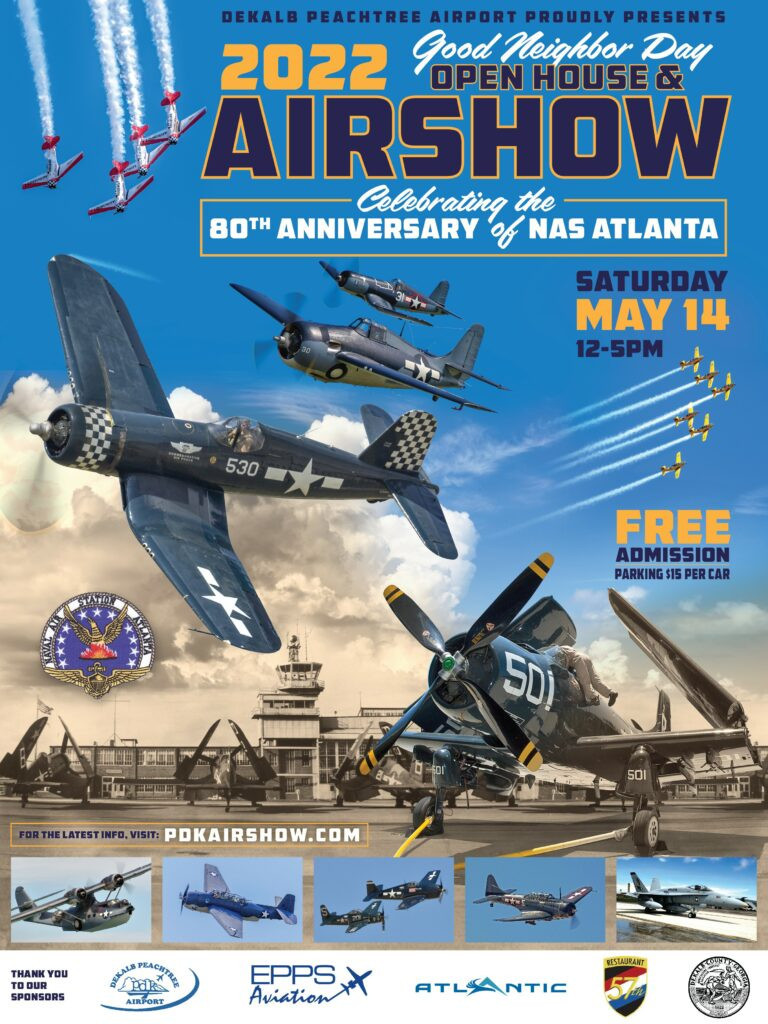 About Peachtree Dekalb Airport: Peachtree Dekalb Airport is the third-largest payer of property taxes in DeKalb County; it is responsible for an estimated 7,300 jobs, and generates revenue of approximately $130 million for local residents. In 2000 the National Air Transportation Association named PDK one of “America’s 100 Most Needed Airports,” critical for the growth of the nation’s aviation infrastructure and economy.