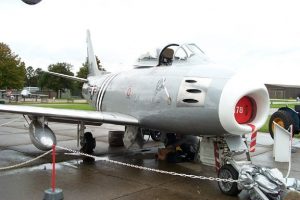 Golden Apple claims that it’s Sabre is the world’s only airworthy ‘A’ series variant in airworthy condition and the world’s oldest still-flying jet. The Sabre has claims to many titles, being the first swept-wing fighter jet produced by the United States, the most highly-produced jet fighter in the West at approximately 10,000 units, bested only by its eastern-bloc competitor, the Mikoyan-Gurevich MiG-15 which is purported to have a total production run of nearly 18,000. The Sabre entered service with the United States Air Force in 1949 and was flown by the militaries of 34 countries with the last retiring the plane from military service, the Bolivian Air Force which retired their Sabres in 1994.

The maintenance schedule for the J47 power plant installed in Golden Apple’s Sabre calls for a “hot end” inspection every 200 hours and Aero Turbine performed a complete strip-down, inspecting and replacing several components that needed attention. After the engine was shipped back to the UK, there was calibration and bench testing to be performed and then the engine was re-installed in the plane for ground runs. The ground test procedures require an intentional “wet start” to purge the fuel lines followed by a dry crank to dissipate the unburnt fuel resulting from the wet start. Next in the sequence is normal start and warm to a normal idle. The plane then taxied to the end of the runway where full power was applied to to ensure that both the main and emergency fuel supply systems were fully operational. Reportedly all systems checked out 100% and the Sabre will be returning to it’s booked-solid appointment calendar, traveling to air shows all across the United Kingdom.