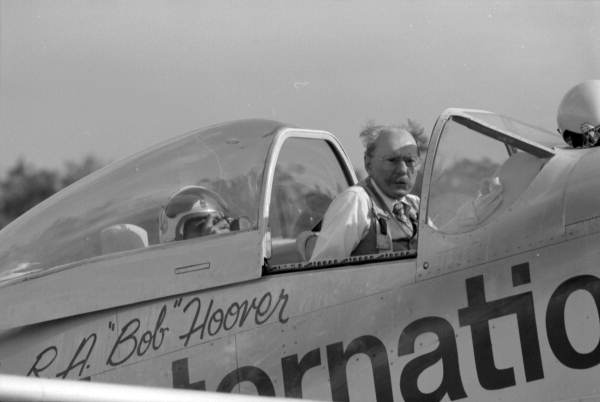 PRESS RELEASE-OSHKOSH, Wis. (July 30, 2014) — Fundraising began today for a trophy honoring the significant contributions of aviation legend and advocate Bob Hoover, known as “the greatest stick-and-rudder pilot who ever lived.” The Bob Hoover Memorial Trophy, will be a life-size bronze statue of Hoover waving his iconic straw hat. It is to be housed in a special place of honor in Washington, D.C., in perpetuity. Funds are being accepted at www.BobHooverTrophy.org

“I can think of no better way to honor his outstanding contributions to general aviation than to have Bob’s statue greet visitors every day as they tour one of our greatest museum’s in Washington, DC. GAMA is proud to honor Bob in this meaningful way,” said Pete Bunce, General Aviation Manufacturers Association (GAMA) president and CEO. “Like millions of other pilots and general aviation enthusiasts, I’ve looked up to Bob Hoover since I was a kid for both his thrilling acrobatics in the air and his true gentleman spirit.”
Among Hoover’s many accomplishments he has been awarded the Distinguished Flying Cross, Soldiers Medal, Air Medal and Purple Heart. He flew 58 missions in World War II before being shot down and was held prisoner of war. Sixteen months later he escaped, stealing a Nazi FW-190 fighter from a nearby airfield. He taught himself aerobatics at a young age and has flow more than 300 different types of aircraft and most fighter aircraft.

Hoover performed experimental flight test work on the Navy FJ-2 jet fighter, the F-86D and the F-100. He demonstrated the safe handling and flying qualities of the F-86 and F-100 series fighters to pilots throughout the world. He was the first man to fly the XFJ-2 Fury Jet and the Navy’s T-28 trainer.

Hoover is the only person to have served two terms as president of the Society of Experimental Test Pilots. He was captain of the 1966 United States Aerobatic Team in the International Competition in Moscow. He holds many aviation records including three climb-to-altitude records in 1978. In 1988, he was inducted into the National Aviation Hall of Fame, which was established by an act of Congress.“For more than 70 years, first as a fighter pilot in World War II, then as a test pilot and an airshow performer, Bob Hoover has devoted himself to furthering the aerospace field and inspiring generations of future aviators. He really is the one pilot who all pilots look up to. The Bob Hoover Memorial Trophy is a fitting recognition of his many accomplishments,” said Greg Herrick, president of the Aviation Foundation of America, Inc., which is coordinating the fundraising effort.Each contributor to the trophy will be able to include his or her name in a time capsule placed inside the base, which will be opened 100 years from the anniversary of the trophy’s dedication. Donors who make larger contributions will be able to include additional commemorative documents or memorial remembrances in keeping with their level of support.

In addition to the trophy, funding will be used to establish a national award recognizing an aviator who espouses the skills and value shown by Hoover throughout his illustrious career. The award will be presented annually to “a living aviator who exhibits the airmanship, leadership, and passion for aviation and life demonstrated by R.A. ‘Bob’ Hoover during his distinguished career as a pilot and aviation advocate while also serving as a source of inspiration and encouragement for current and prospective aviators.” Winners’ names will be featured along with Hoover’s on the award.

To learn more about the Hoover Trophy, and to make a donation, please visit: www.bobhooverthropy.org