The British Phantom Aviation Group (BPAG) recently announced that two of their airframes have now moved safely to their new home at Cotswold Airport (formerly RAF Kemble) near Cirencester, Gloucestershire in the UK.

On 22nd July 2021, McDonnell-Douglas F-4K Phantom XT597 made the 125-mile journey from Prestwold, Leicestershire down to Cotswold Airport. Once on-site, the former Royal Air Force combat jet joined FGR.2 XT905, which had undertaken a similar journey three weeks prior. This marks the point where two of the three Phantom IIs in BPAG’s care are now located at their final destination.  The Group’s third airframe, F-4J(UK) ZE360, will join the duo in due course.

Furthermore, BPAG is in the process of establishing workshops and visitor facilities at Cotswold Airport; this is where the restoration and display of their three aircraft will take place. A crowdfunding campaign to support this effort is currently live and can be found HERE.

Many aircraft have worn the A&AEE’s unique and striking tri-color scheme (nicknamed ‘Raspberry Ripple’) and this Phantom was no exception. XT597 took its first flight in November 1966 and is one of the three pre-production F-4K variants. It served as the trial and evaluations aircraft for the UK’s Phantom fleet for many years (including its participation in the initial deck trails aboard USS Coral Sea) before eventually retiring to a museum at MOD Boscombe Down. However, when this facility closed in 2012, the aircraft was put up for disposal and resided for a period at a private airfield while awaiting a buyer. Mark Abbott (a senior member of the BPAG management team) purchased the airframe, and the BPAG will be providing the workforce and the facilities for the preservation work to be carried out. In return, when ready, the aircraft will go on display as part of the BPAG collection.

Phantom FGR.2 XT905 began its service with the Royal Air Force’s 228 OCU (Operational Conversion Unit) in 1968. She also served with Numbers 17 and 31 Squadrons before ending her active career with No.74(F) ‘Tiger’ Squadron in 1991. The aircraft subsequently acted as an instructional airframe at RAF North Luffenham before her final disposal in 2013, when she ended up with the aircraft brokers, Everett Aero. A private buyer purchased her in 2019, and they intend to restore the airframe back to a classic camouflage scheme with 228 OCU markings. The BPAG will be carrying out the restoration work and will also exhibit the aircraft when the refurbishment is finished.

ZE360 is one of fifteen ex-US Navy F-4J Phantom IIs which the British Ministry of Defence purchased to supplement the RAF’s fleet during the early 1980s. After a substantial refit at NARF North Island in San Diego, California the aircraft joined RAF No.74(F) ‘Tiger’ Squadron in October, 1984. Following withdrawal from service, the aircraft flew to RAF Manston in February 1991, becoming an instructional airframe at the nearby Fire Training School. Unlike many aircraft at the facility, she avoided any burning during firefighting practice and survived her time there physically intact, although in dilapidated condition. The BPAG obtained her in 2019. She is one of just two remaining complete examples of the F-4J(UK) variant – the other being on display at Imperial War Museum Duxford in its previous US Navy markings. When ZE360’s planned-for restoration is complete, she  will therefore be the only complete F-4J(UK) model on display in RAF colors anywhere in the world.

Interestingly, the British Phantom Aviation Group owes its origins to social media and the formation of a special interest group on Facebook in 2012. With a membership comprising both ex-service personnel and aviation enthusiasts, it was dedicated to the UK-specific variants of the McDonnell-Douglas F-4 Phantom II and its time in service with the Royal Air Force and with the Royal Navy’s Fleet Air Arm. 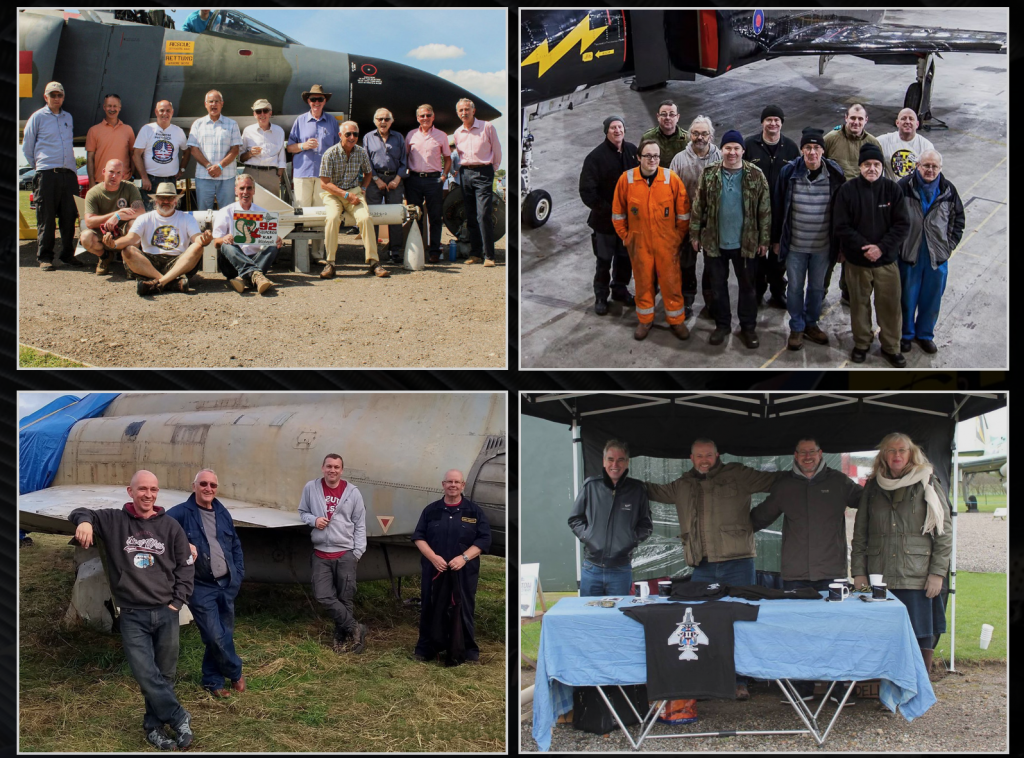 One of the group’s eventual aims was to step outside the online environment and into the real world of aircraft preservation. However, after an unsuccessful bid to secure the release of one of the many neglected gate guards or decoy airframes in the Ministry Of Defence inventory, the original group officially reformed into The British Phantom Aviation Group in 2013, and they have never looked back! For more information, please visit www.bpag.co.uk