Based upon an article by Joe Kunzler

The Flying Heritage Collection has become well known for its uncompromising, down-to-the-last-rivet restorations, and has amassed a formidable collection of world-class warbirds within their museum at Paine Field, near Seattle, Washington. FHC holds regular events at the museum to showcase particular exhibits. Sometimes these are flying demonstrations, but they also offer in-depth reviews of specific aircraft from time-to-time as well. This past Thursday, FHC featured their North American B-25J Mitchell in an all-access tour, which allowed attendees to take a look inside what many consider the most accurately and comprehensively restored example of its kind. Unlike other airworthy Mitchell’s, which have had to make compromises to allow passengers to fly aboard, this B-25 has all of the original internal military fittings, as well as the rarer external features as well. Contributor, Joe Kunzler, attended the Mitchell presentation at the Flying Heritage Collection on behalf of WarbirdsNews, and we thought our readers would enjoy seeing what he discovered.

Before the actual tour of the aircraft, FHC Military Aviation Curator, Cory Graf gave a lecture detailing the B-25’s lineage and combat record. He also spoke of the living history aspects of the museum’s Mitchell. Their aircraft represents a bomber from the 341st Bomb Group, the Burma Bridge Busters which served in the China-Burma-India Theatre during WWII. Graff explained, “This airplane… didn’t have a combat history, so we were sort of free to pick something else that was relevant and important to us. We decided to paint an airplane lost in combat.” Graf went on to explain that although the 341st Bomb Group received their bombers with a bare metal finish, they painted them once in theatre.

FHC’s Mitchell rolled off the North American production line as 44-30254. While it didn’t see combat in WWII, it did enter the Royal Canadian Air Force following the war as RCAF 5211, before joining the Canadian civilian registry in 1961 as a fuel tanker and later as a firebomber. FHC acquired the Mitchell in 1999 and tasked world-renowned B-25 experts, AeroTrader, to restore her at their primary facility in Chino, California. She flew again for the  first time in 2011.

FHC organized the interior tour in three stations, where pairs of attendees had roughly two minutes per station to observe and photograph. Once inside the B-25, it became immediately clear how thorough the restoration was. While other B-25 Mitchell restorations are mostly focused on safe flight for selling rides, this restoration was all about preserving historical accuracy. Therefore, many items which would be deleted as either unnecessary, or unsafe for passengers feature in this aircraft. Some examples of these details include the escape axe mounted in its traditional position; the machine guns fully loaded with (inert) ammunition and complete with gunsights, signal flares launch tubes along with the dummy flares in their stowage position. Aero Trader, the restoration company, even recreated the bomb bay camera position for capturing shots of the bombing run.

Furthermore, as Mr. Graff told guests in his talk, was the view when entering the B-25J rear area. Mr. Graff explained, “You’ll see big, long huge chutes down each side of the passageway along the back of the fuselage. It was important not having all those ammo boxes sitting in the back of the airplane, it screwed up the weight and balance. So they’re near the entrance and there’s these long roller coaster chutes go to the back of the airplane.”

As Mr. Graff expounded, “One of the things that’s amazing about this B-25 and you’ll see it as you go in the airplane is it’s chock full of everything it’s supposed to have. A lot of people who restore airplanes want to give rides in airplanes. So when you have all the gear in the airplane you can’t fit as many people in the airplane and you can’t make as much money. Our goal was to make this one of the best restorations that had ever been done of a North American B-25 bomber…. So, as a result, Aero Trader had been collecting all these doo-dads all these years… and we wanted the whole enchilada. We wanted oxygen bottles and we wanted ammo boxes and armor and bomb sights and flares and drift makers and life rafts … It makes for a bit of a sluggish airplane, but more realistic when it goes out and flies.” 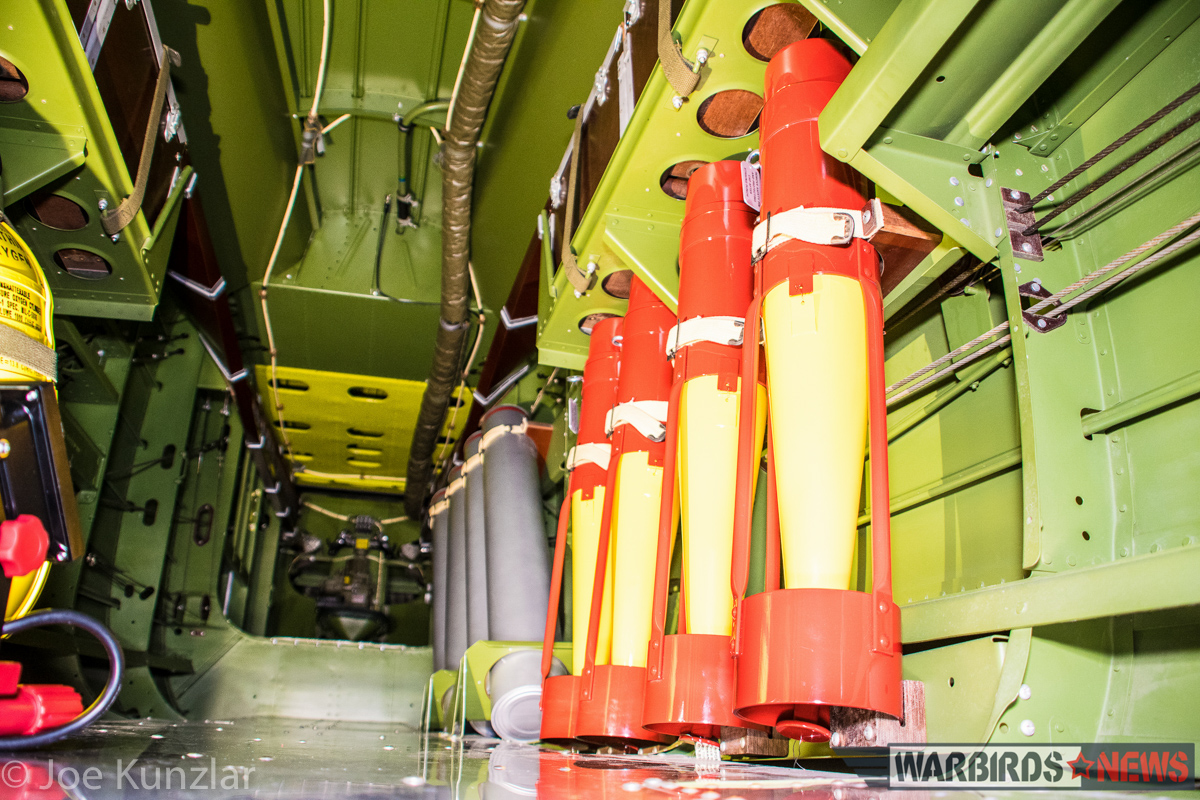 The cockpit is incredibly complete and even includes an astro-compass and armored seats, with the only concession to modern instrumentation being a carefully concealed radio system. The image below should give readers a good idea of how authentic the cockpit’s restoration is.