Waterloo Warbirds, based at the Region of Waterloo International Airport just east of Kitchener, Ontario recently announced that they are booking rides in their MiG-15. Nicknamed Natasha, this aircraft is actually a former Polish Air Force example, license-built during 1954 as a Lim-1 (s/n 1A10017) by Wytwórnia Sprzętu Komunikacyjnego (WSK) at their factory in Mielec, south-eastern Poland. During its military service, the single-seat Lim-1 received modifications to become a two-seat SBLim-2 trainer, roughly equivalent to a MiG-15UTI. A Klimov VK-1A, with over 5,900 pounds of thrust, powers the jet – interestingly, the VK-1 is itself a close derivative of the British Rolls-Royce Nene turbojet. Natasha flew with the Polish Air Force for several decades, before the military retired her in February, 1992. The jet soon began a new life in the Americas, joining the U.S. civil registry as N15LC in June, 1994. She arrived in a disassembled state and underwent refurbishment in Latrobe, Pennsylvania, flying again for the first time in 1998. Viper North Inc. of Albuquerque, New Mexico acquired the aircraft in June, 2008, changing her registration to N15VN to reflect the company name. They based her initially with Aviation Classics at Reno Stead Airport in Reno, Nevada, before moving Natasha to Canada in 2013 to become a member of the Waterloo Warbirds fleet (where she now sports the Canadian registration, C-FMVN).

According to Waterloo Warbirds, the Natasha has undergone extensive maintenance since her northwards move, and this included  a major rebuild of the braking system to replace the original, Soviet-designed units with those normally installed in a Lockheed T-33. This made a lot of sense given the available local expertise, ease of maintenance, and parts availability. The new brakes will also permit operations from shorter runways. Following her overhaul, Natasha took to the skies again during the final months of 2018. With so few MiG-15s presently flying, Natasha is sure to prove a hit on the air show scene, not to mention with those seeking a unique flight experience opportunity. Indeed, a flight in Natasha would be the ultimate dream for many a classic jet fighter enthusiast! Waterloo Warbirds is currently offering a significant discount on these flights until February 1st (click HERE for details). 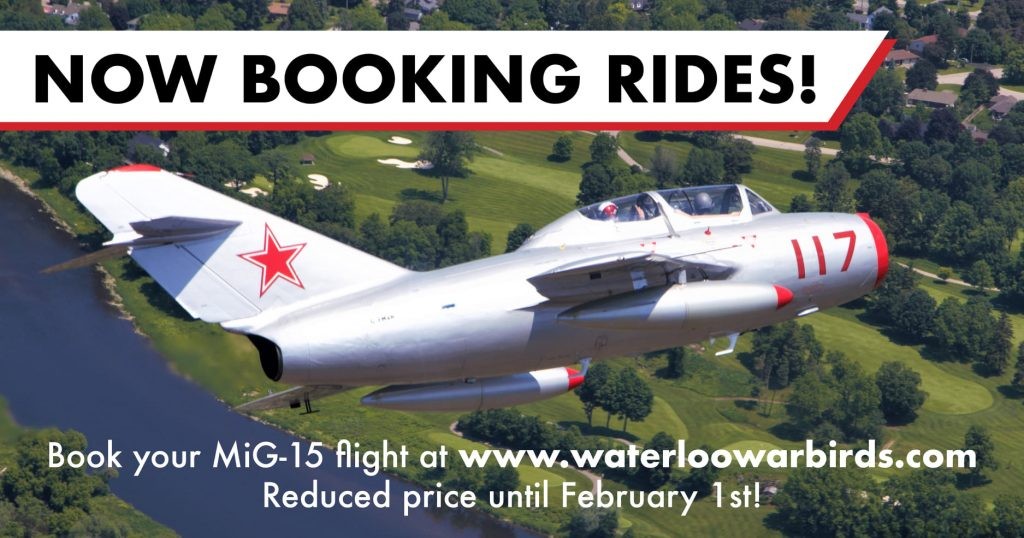 To book a ride in the Waterloo Warbirds’ Mig-15 click HERE.