Forty-one years ago today, an Navy F-4B Phantom II from the “Chargers” of Fighter Squadron ONE SIX ONE (VF-161) scored the 197th and final US air-to-air victory of the Vietnam War.  While operating from the USS Midway (CVA-41), “Rock River 102” crewed by Lieutenant Victor Kovaleski and Lieutenant (junior grade) James Wise downed an MiG-17 with an AIM-9 Sidewinder.  The “Chargers” of VF-161 recorded five MiG kills while deployed aboard the USS Midway during the Vietnam War.  The Phantom entered service with the U.S Navy on 30 December 1960 with the VF-121 Pacemakers at NAS Miramar. The VF-74 Be-devilers at NAS Oceana became the first deployable Phantom squadron when it received its F4H-1s (F-4Bs) on 8 July 1961 . In 1984, the F-4Ns had been retired, and by 1987 the last F-4Ss were retired in the US Navy deployable squadrons. On 25 March 1986, an F-4S belonging to the VF-151 “Vigilantes,” became the last active duty U.S. Navy Phantom to launch from an aircraft carrier, in this case, the USS Midway. On 18 October 1986, an F-4S from the VF-202 “Superheats”, a Naval Reserve fighter squadron, made the last-ever Phantom carrier landing while operating aboard USS America. In 1987, the last of the Naval Reserve-operated F-4S aircraft were replaced by F-14As (Source Naval Aviation News, September–October 2004)

Below is one of Aviation Enthusiasts photos of an F-4 Phantom II aboard the USS Midway Museum.  The Phantom wears the livery of Rock River 102 from VF-161 on the right side of the aircraft. 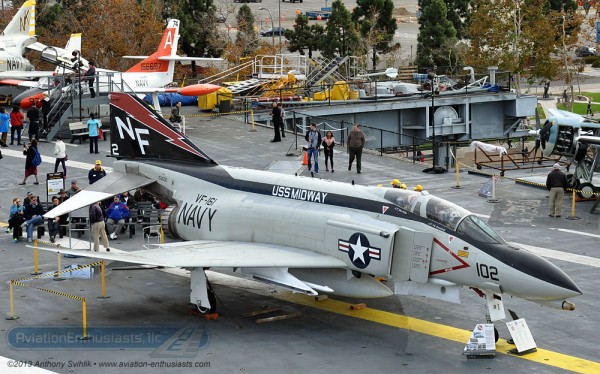