The Boeing B-29 Superfortress, first flown in 1942, began active service in 1944 and is best known as the airplane whose missions over Japan helped bring about the end of World War II. The Army Air Force ordered it as a replacement for the older B-17s and B-24s, with longer range, great speed and bomb load. The B-29 also served in the Korean War during the early 1950s and was a staple of the U.S. Air Force until the late 1950s.

Admission cost is $15 for adults and $8 for children age 10 through 17. Children under age 10 are free. The airplanes will be on static display when they are not flying. B-29 cockpit tours are included in the admission price. Ride prices range from $75 to $1895 depending upon the aircraft chosen. Ride reservations may be made at www.AirPowerTour.org where additional information about the tour stop may also be found.

The CAF So Cal Wing and Air Museum address is 455 Aviation Drive, Camarillo, CA 93010. (Camarillo Airport is located near 101 Freeway and Las Posas Road. For more information call the museum at (805) 482-0064. The non-profit, 501c3 all volunteer organization honors American Military Aviation by educating young people about WWII aircraft history, keeping the memory of those who served our country alive. More information about the So Cal Wing may be found at www.cafsocal.com. The Wing, normally closed on Mondays, will be open Monday March 2nd at 9:00 a.m. Aircraft arrival time is planned for noon. 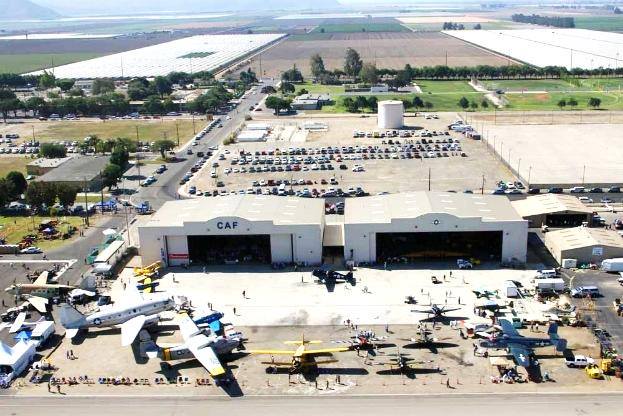 About the CAF AirPower History Tour
FIFI, celebrating her 41st year of flight with the Commemorative Air Force (CAF) in 2015, is visiting local air- ports in Southwest United States this spring as the feature aircraft in the CAF AirPower History Tour. The tour brings aircraft, pilots and crews together from over sixty CAF units located throughout the country  to create an ever changing assortment of touring military aircraft. These aeroplanes are powerful, “hands-on” history lessons bringing the sights, smells and sounds of World War II aviation lore to audiences across the United States.

About the CAF’s B-29 Superfortress, FIFI
The CAF acquired FIFI in the early 1970s when a group of CAF members found her at the U.S. Navy Proving Ground in China Lake, California where she had been used as a missile target. They rescued the airplane and restored her to fly. She flew for over thirty years until 2006 when the chief pilot made the decision to ground her pending a complete power plant re-fit. What followed was an extensive four-year restoration that included replacing the original power plants  with new, custom-built, hybrid engines. FIFI returned to the skies in 2010 and since that time has traveled from coast-to-coast attracting large crowds at every tour stop. Learn more about FIFI and her tour schedule at www.AirPowerTour.org.

About the Commemorative Air Force
The Commemorative Air Force honors the men and women who built, maintained and flew military airplanes during World War II. The organization believes that is best accomplished by maintaining their fleet of vintage aircraft in flying condition, and taking them to the people so they can experience the sight and sound of history in flight. Collecting, restoring and flying historic military aircraft for more than half a century, the Commemorative Air Force ranks as one of the largest private air forces in the world. The CAF is dedicated to Honoring American Military Aviation through flight, exhibition and remembrance. A non-profit educational association, the CAF has more than 10,000 members and a fleet of over 150 airplanes distributed throughout the country to 67 units located in 27 states for care and operation. For more information, visit www.commemorativeairforce.org.