The restoration of the B-29 Superfortress “Doc”  is making progress, today we called Tony Mazzolini to catch up with the latest events. Last weekend the volunteers have worked to hang the first of four restored & rebuilt engine nacelles. Yesterday San Antonio Propeller Service packed the first two propellers which will be delivered to Wichita next week. The propellers were fully restored and balanced in the San Antonio based  shop so the Doc’s team will only have to install them once they get them. Another important update is abut the fuel cells, almost half of the 22 installed on the B-29 are ready to be installed. The team has decided to rebuild the cells because the original ones were deteriorated by the long years sitting in the desert heat.

In 1987, after sitting more than 40 years in the Mojave Desert where it was a sun baked sanctuary for birds and many other desert creatures, Doc was rescued by a group of historians with a dream. The group, led by Tony Mazzolini and backed by the United States Aviation Museum, had a plan to restore the B-29 and eventually get it back into the air.

Tony Mazzolini, a 78 year old local, has invested a lot of effort into the B-29.  He was instrumental in rescuing the bomber from the scrapyard, and will remain involved in the restoration.  Mazzolini welcomes the change: “I’ve made a lot of personal sacrifices in terms of time and resources and I just can’t do it anymore.  I’m getting down to the final end of my runway, so to speak.” 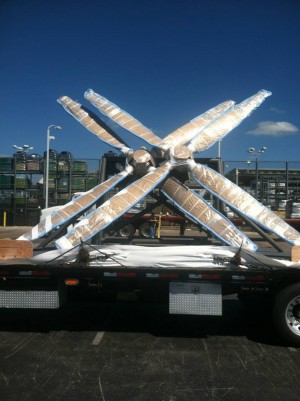 Tony tells us that 3 of the 6 engines are completed and tested. The team has decided to go for an hybrid solution, in fact Doc’s engines are a mix between the Curtis-Wright  3350/57 used in the C-119  and the Skyraider’s Curtis-Wright  3350/26. The exhaust system was completely re-designed to avoid the issues that the FIFI had in the past.

According to Tony “Doc” should be ready  for her first flight in May with the hope to make the first public appearance in an airshow for the 2014 Air venture in Oshkosh.

In February of this year, Doc was acquired by “Doc’s Friends” and the restoration of the B-29 Superfortress resumed. Click here to see how you can get involved and be a part of this history rebuild of the aircraft.