The Experimental Aircraft Association’s B-17G, Aluminum Overcast (44-85740, N5017N), has been at Punta Gorda, Florida since April 2021, grounded after a wing-attach issue was found. The EAA’s Director of Communications, Dick Knapinski, recently provided a progress update on the necessary repairs:

“The B-17 Aluminum Overcast remains in Punta Gorda, Florida, for repairs. As you recall, our volunteer crew noticed irregularities last year during a tour stop. Further, inspection revealed a crack emanating from the left sheer web, which is a secondary support structure for the wing. The only way to repair that is by removing the wing. The repair itself is not overly complicated, but getting to it is. That is why we wanted to wait until after AirVenture 2021, so we could give it the focused attention that it deserves. As we removed the wing, our teams noticed other things that would be best served by repairing them at the same time. Such is life with vintage aircraft. Thus, we put a plan together during the last few months of 2021 to take care of all the discrepancies at once during this project. The next step is to source the parts and material, which as you know can be a challenge with an airframe that has been out of production for many years. There’s been a group of local volunteers that have been outstanding with assistance to our EAA full-time crew that has regularly journeyed to Florida. We hope to complete the engineering and acquire all the materials needed so we can fly the aircraft home to Oshkosh this summer. We don’t have a specific date in mind for that return trip or to get it back into service. Airplanes have their own schedules for such things, it seems.”

The photo suggests that the left-wing inboard section has been detached from the fuselage to make the repairs. Both outer wing panels have also been removed to provide room in the hangar.

The EAA flight crew is to be commended for their diligence in detecting the airframe discrepancy, which they discovered during a routine pre-flight inspection while the aircraft was on tour providing rides to the general public. An external wing fairing covering the area indicated some suspicious movement and, once the crew unlatched the fairing to take a closer look, they found the problem.

The drawing below depicts the left-wing attachment fittings. The primary bolts holding the wings are established in four places: upper and lower fittings for the forward and aft attach points to the forward and aft wing spar assembly. There is another bolt at the midpoint (identified as “D” below) between the upper and lower bolt sets, and this is where the problem lies, reportedly on the aft attachment assembly. (While the forward attachment point is depicted in detail below, the aft assembly is similar.) 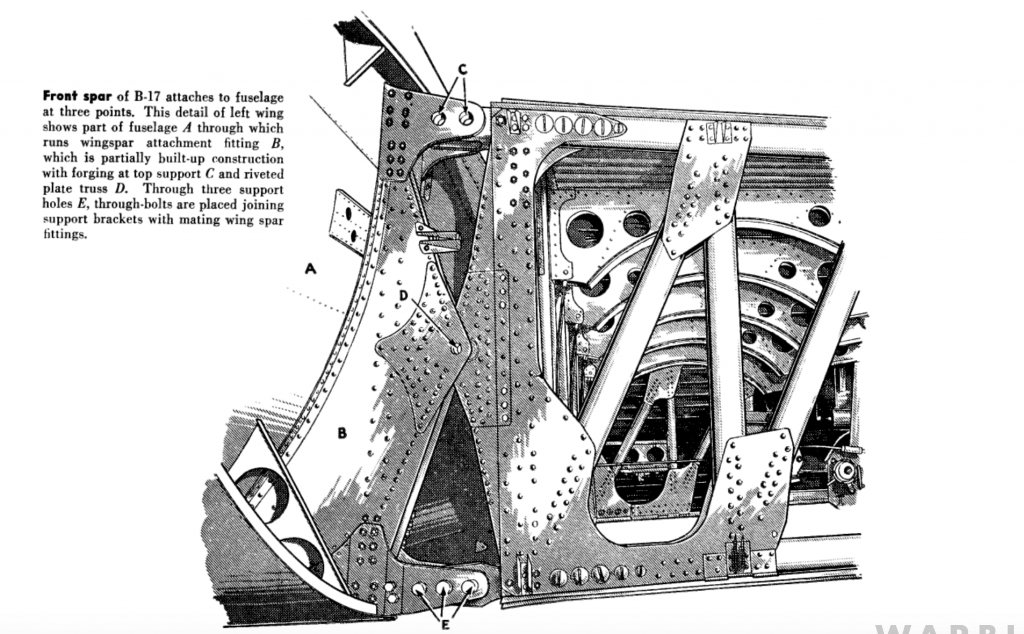 A brief history of B-17G 44-85740 (detailed history and photos can be found in Final Cut: The Post-War Flying Fortress and Survivors): The U.S. Army Air Forces officially accepted this B-17 for service on May 18th, 1945. With the war in Europe already over by this point, the bomber was surplus to requirements and immediately went into storage. The Army Air Forces stripped it of military equipment in late 1945 and sold it the following year as scrap, but instead of the smelter, the aircraft found its way the Vero Beach Export & Import Co. of Vero Beach, Florida in August, 1947. This company converted the aircraft into a cargo plane, for hauling cattle around the Caribbean. That didn’t last long, however, as Aero Services Corp of Philadelphia, Pennsylvania acquired the Flying Fortress for aerial surveying purposes in 1949. They used it for mapping countries in the Middle East and Southeast Asia until 1962 when they sold it to Chris Stoltzfus (father of Ken and Karl Stoltzfus who rescued VC-121 Columbine II President Eisenhower’s executive transport), who wanted to convert the aircraft into an aerial spraying platform. In 1966, Stoltzfus sold the aircraft to Dothan Aviation in Dothan, Alabama, and they used the aircraft as both a sprayer and a fire bomber until the mid-1970s when they too sold the aircraft, this time to a man named William Harrison, who began its restoration back into a WWII-vintage B-17 bomber for use on the warbird circuit. He in turn donated the bomber to the EAA in 1981, and the aircraft has flown as Aluminum Overcast ever since. It is one of several B-17s which tour around the country providing flight experiences to the public each year. Revenue from the touring helps keep the B-17s airworthy and available.

Thanks to the EAA’s Dick Knapinski and Chris Henry for the update.