EAA AirVenture Oshkosh 2019 is now in the books, and it proved to be another highly successful event, with another record attendance this year. The Experimental Aircraft Association’s CEO and Chairman had the following to say in a formal press release celebrating this years accomplishments…

“What I’m most proud of this year is how our volunteers, staff, and the community joined to overcome the challenges resulting from the massive storms that hit the airport and campground just prior to opening day. It took a true team effort to meet the additional demands on time and resources to provide services to our members and visitors.” 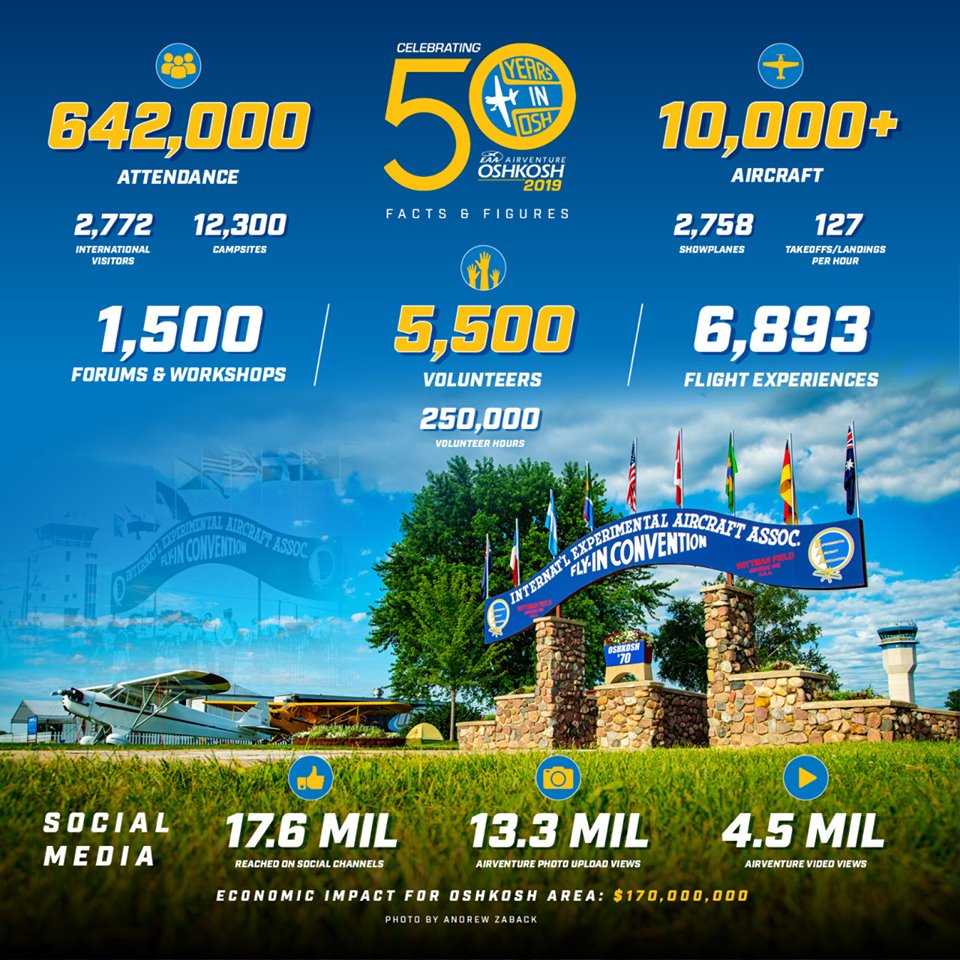 “EAA members and aviation enthusiasts attended in large numbers, and stayed throughout the week. On July 22, we thanked Oshkosh residents for 50 years of support with free opening-day tickets and more than 8,700 of them attended – which equates to 13 percent of the city’s population. Throughout the rest of the week, our efforts to create unique attractions and aviation highlights across the grounds were incredibly successful in creating ‘Only at Oshkosh’ moments.”

Total aircraft: More than 10,000 aircraft arrived at Wittman Regional Airport in Oshkosh and other airports in east-central Wisconsin. At Wittman alone, there were 16,807 aircraft operations in the 11-day period from July 19-29, which is an average of approximately 127 takeoffs/landings per hour.

Camping: More than 12,300 sites in aircraft and drive-in camping accounted for an estimated 40,000 visitors.

Forums, Workshops, and Presentations: A total of 1,500 sessions attended by more than 75,000 people.

The Gathering shines: The EAA Aviation Foundation’s annual event to support its aviation education programs attracted some 1,400 people and raised more than $2.8 million dollars that will be focused on EAA’s mission of growing participation in aviation.

“Planning is well underway for next year’s event, including discussions during AirVenture 2019 about possible features and attractions for 2020. In the next few months, we will be finalizing highlights in all areas to make the 68th annual EAA fly-in convention the World’s Greatest Aviation Celebration.”