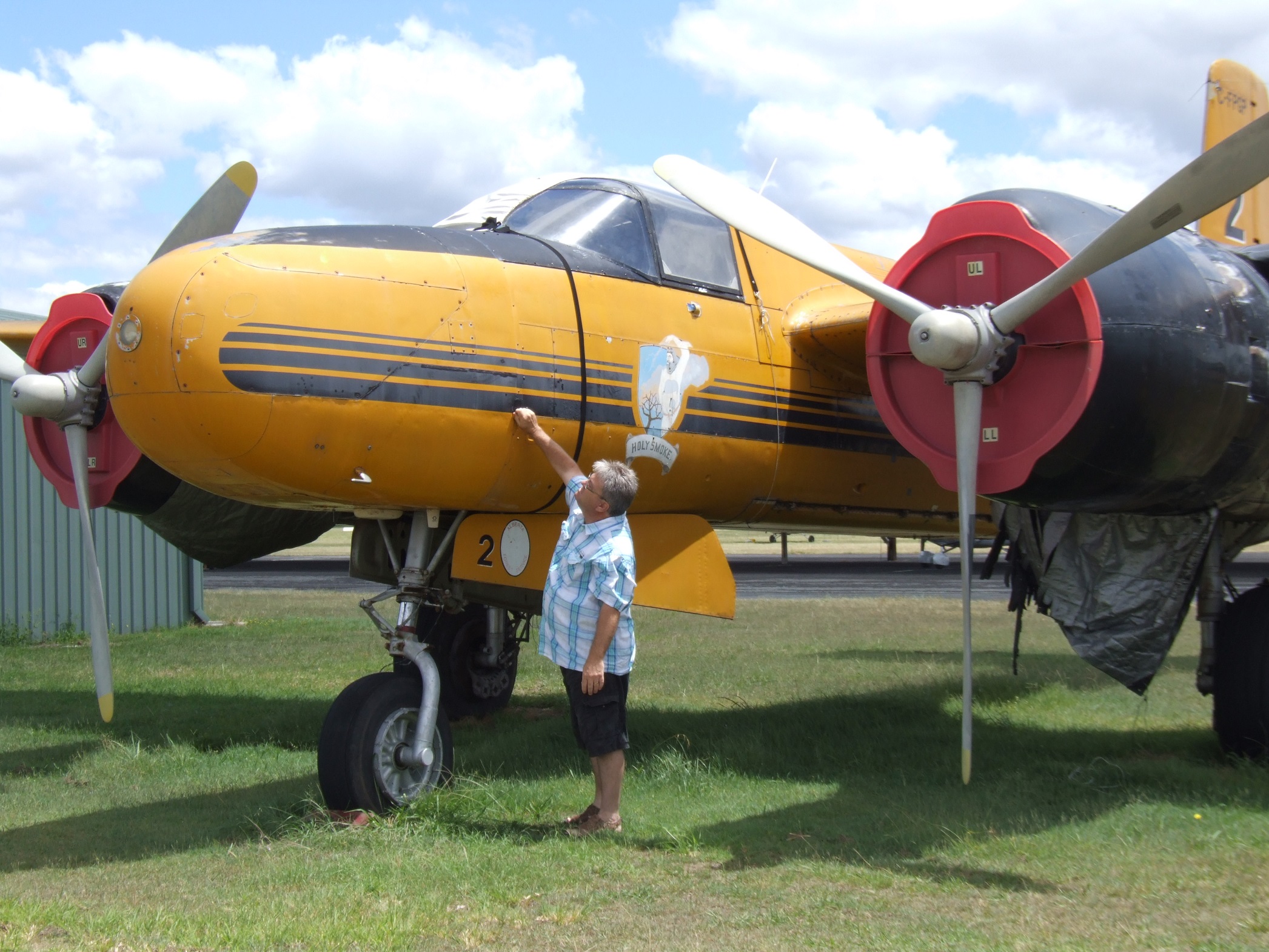 Sometimes dreams take a while to become reality, and for those longing for a Douglas A-26 Invader to join the civil registry in Australia…. well, that took a while. But what connection does Australia have with the Invader, you might ask? As it happens, the first USAAF combat trials aircraft came through Australia enroute to New Guinea. And later on, pilots of RAAF 77 Squadron regularly escorted American B-26’s during the Korean War. A number of RAAF pilots got a trip or two in them over Korea as well.

How an A-26 came to reside at Archerfield airport in Queensland, Australia is a story in and of itself. Back in the 1980s, well known Australian pilot, and passionate warbird enthusiast Randal McFarlane, set his sights on one day owning an Invader. McFarlane had to wait until 2006 to see that dream come true. His Invader, painted in its bright black and yellow color scheme from decades operating as an air tanker with Air Spray Ltd. in Red Deer, Alberta, has sat quietly in storage for nearly six years awaiting its return to flight.

She rolled off the Douglas production line in 1944 as A-26C Invader 44-35898 with a solid gun nose, rather than a glazed bomber’s nose. Oddly, all Douglas Invaders still in the US inventory became B-26s in 1948, as the Martin B-26 Marauder was no longer in service. 44-35898’s data plate reflects this change, as you will see in the image below. Her history immediately after construction is still unclear though, but she did serve as a test airframe in radar trials at the Massachusetts Institute of Technology in the late 1940-50s. John Lear purchased her in 1961, and eventually modified the aircraft to take part in the 1968 Reno Air Races. She performed well for those days, with an average course speed of 284mph, even out-running some of the fighter types taking part.  Air spray Ltd acquired her in 11971, and modified the aircraft to become a fire-bomber. She adopted the call sign “Tanker 2” with a “Holy Smoke” shield painted on her fuselage just beneath the pilot’s window. She served in this role for around 30 years, but during 2003 Air Spray put the aircraft up for sale along with a selection of the seventeen other B-26s then on their books. 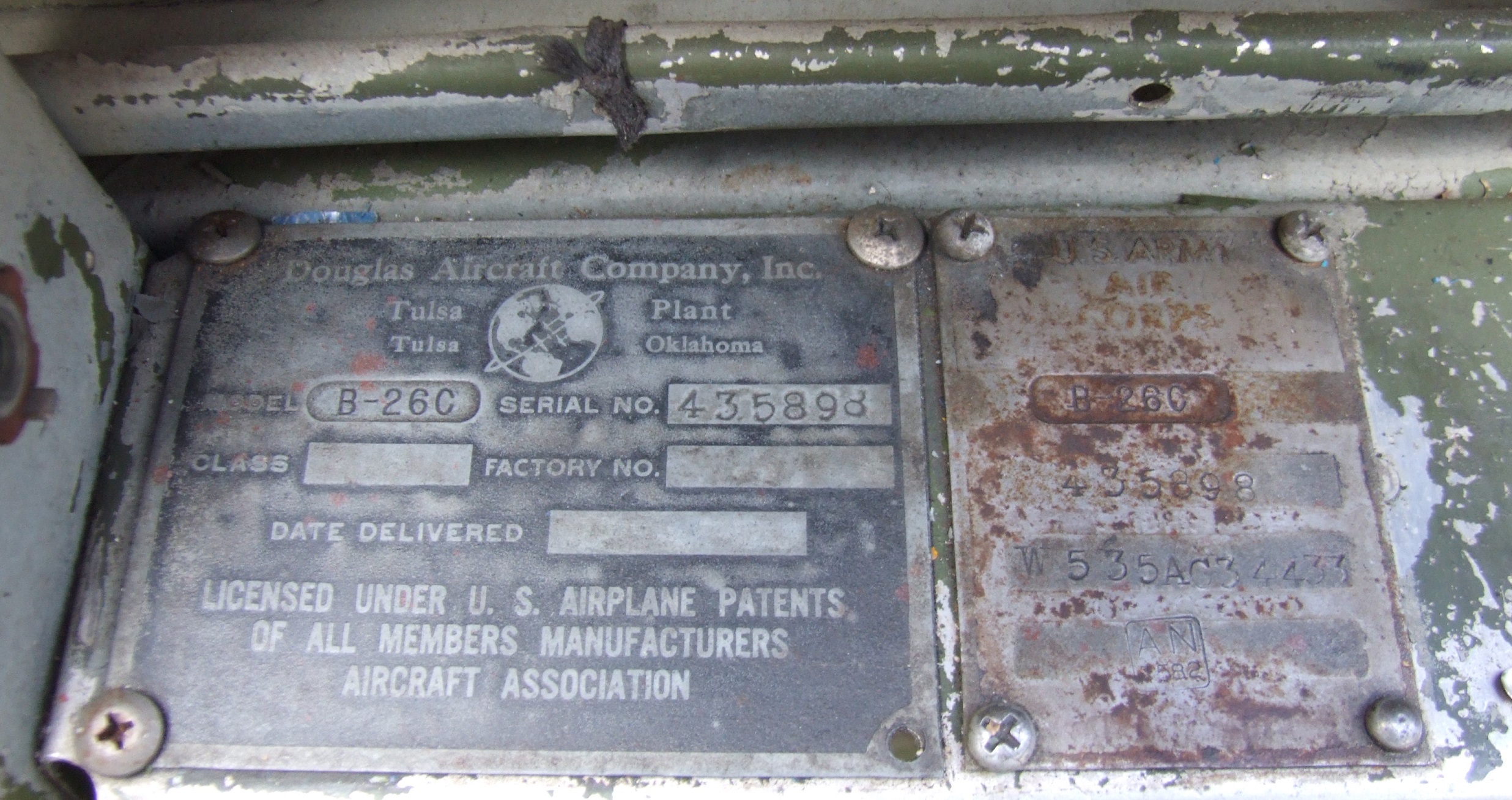 In 2006 Randal McFarlane heard about the Air Spray sale and he decided to purchase the best B-26 Invader of the lot. McFarlane spent a lot of time making sure the aircraft was capable of a safe ferry flight to Australia. He said that, “It was thoroughly gone through, and was the best of the fleet and had dual controls. It was also close to a stock aircraft, as others were ex-corporate On Mark conversions.” During the overhaul process, McFarlane made three trips from Australia to the aircraft’s North American overhaul shop, overseeing the avionics updates, adding long range fuel tanks, and making sure the aircraft had the best options available at that time.  The ferry flight from the USA to Australia took around four weeks to fly in various legs across the Pacific Ocean to Brisbane, with McFarlane meeting it in Hawaii. McFarlane recollects that, “it was crewed by Canadian pilot Doug Gerrard and engineer Darcy Hankins. I managed the ferry etc from Brisbane. We encountered an earthquake in Hawaii, a cyclone in Samoa, a fuel shortage in Pago Pago to help and a diversion to Norfolk Island for fuel too.” Its arrival in Australia was greeted with much interest from the warbird community and enthusiasts. This was now a second notch in Randal’s belt because he had played a significant part in bringing a B-25 to Australia previously.

In 2012 McFarlane put his prized aircraft up for sale. Reevers Pastoral took over ownership in February 2014, and the overhaul process began just a month later. The new owner has had Performance Aero, and Aviation Component Services conduct a series of thorough inspections and repairs where necessary. This maintenance has seen the cockpit cleaned up, Airworthiness Directives fulfilled, propellers removed and both Pratt & Whitney R-2800 radial engines tested with cylinders inspected, fuel filters checked and fuel lines replaced. As of May 13th, successful engine runs commenced. The aircraft will be undergoing more checks covering brakes, operational systems checks, and minor repairs to ensure it is airworthy for the new owner. 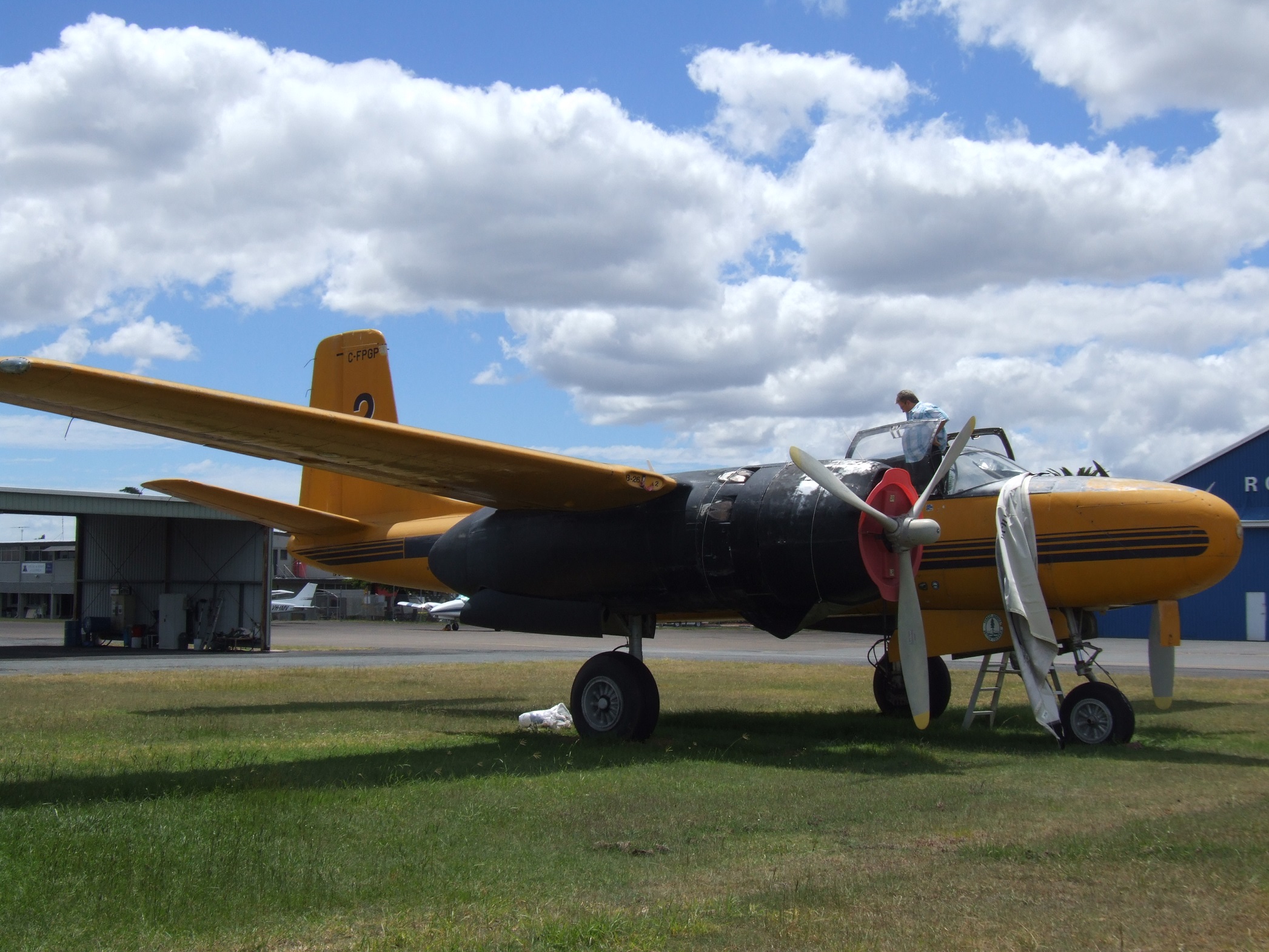 If all goes well, the Invader should take to air later this year. Once the aircraft is officially airworthy again, it will receive new markings which will most likely represent a WWII-era US Army Air Force Invader. The owner has yet to choose a specific aircraft paint scheme, but has examined several options. She is expected to take part in several Australian air shows. She will be the only Invader on the Australian circuit. Interestingly though, there is another ex-Air Spray Douglas Invader in Australia, this being B-26C 43-22653 which is displayed, partially restored at the Australian Aviation Museum in Bankstown, New South Wales. It is reportedly undergoing a long-term restoration.

This article was compiled by Phil Buckley with contributions from Reevers Pastoral Pty Ltd and Randal McFarlane.