As everybody will know by now, the D-Day Squadron pulled off a remarkable feat this past summer by organizing and executing the safe and successful transatlantic journey of fifteen historic Douglas transports to take part in the 75th anniversary celebrations of D-Day (and later the Berlin Airlift 70th as well). The foundation has continued to bloom since these remarkable achievements, and is looking forwards to a bright future in helping to preserve D-Day’s legacy, as well as acting as a support group for the DC-3 community. To help foster these aims, the D-Day Squadron has just announced the creation of a documentary film based upon this summer’s exploits as listed in today’s press release below. Based upon the sizzle reel online now, this promises to be an extraordinary film, and one well worth supporting… but it will need our help to reach fruition.
Oxford, Conn. – September 18th, 2019 – The D-Day Squadron announced a partnership with the documentary film INTO FLIGHT ONCE MORE, produced by Sound Off Films, which is currently in production and raising completion funds for an anticipated 2020 release. The film commemorates the D-Day Squadron’s crossing of the Atlantic with 15 historic C-47 and DC-3 aircraft to honor the 75th anniversary of the invasion of Normandy on June 6th, 2019. INTO FLIGHT ONCE MORE shares the incredible individual stories of veterans that flew with the D-Day Squadron from Oxford, Connecticut to Normandy, France—and in some cases jumped with them—while showcasing the many once-in-a-lifetime commemorations that took place in the U.K. and France.
The film’s teaser video can be seen online at ddaysquadron.org/ddsfilm. The D-Day Squadron encourages its members to support its continuing mission of ensuring the story of D-Day is not forgotten by contributing to the film’s completion funds at ddaysquadron.org/ddsfilm.
“It was a great privilege to be a part of the D-Day Squadron on our journey across the Atlantic to Normandy. I was touched to hear stories firsthand from those who fought for our freedom 75 years ago and become close with the teams who took on this tremendous effort to honor them,” said Adrienne Hall, Principal of Sound Off Films and Director of INTO FLIGHT ONCE MORE. “We’re thrilled to be able to bring history to life, share the highs and lows of this incredible trip and contribute to enduring memory of D-Day.”
“When D-Day Squadron aircraft flew the original “Blue Spruce” route to cross the Atlantic, the film crew travelled with us in support aircraft and in the actual C-47s at times,” stated Moreno Aguiari, Director of Marketing and Public Relations for the D-Day Squadron. “They were completely embedded with the pilots, crews and team of the D-Day Squadron so they could capture the full breadth and scope of what was accomplished. They became a part of us.”
“But the story has not yet been told,” Aguiari continued. “Additional funding needs to be raised to finish the film so that the story of this tribute to the Greatest Generation with all of the challenges, risks and rewards that went along with it, can be preserved in the best possible format for the generations of the future.”
Hundreds of hours of high-definition footage were recorded during the journey, but editing, marketing and promotion still need to be funded to ensure a successful release.
Events captured for the film include :
– Multiple paratrooper drops and a presidential flyover of the 75th anniversary of the Normandy landings
– Flyovers during the 70th anniversary of the Berlin Airlift
– The personal stories of the pilots, crews and veterans that either took 75-year-old aircraft through some of the most remote airports on the planet and/or participated in commemorations in Connecticut, Maine, Scotland, United Kingdom, France, Germany and Italy
Accomplishments during the mission of the D-Day Squadron include:
15 airplanes returning to Europe and Normandy
6 D-Day veterans personally honored
150,000 total miles flown by Squadron aircraft
1,050 total flight hours by Squadron aircraft
1,776 miles flown over water by Squadron aircraft
11 flight information regions covered by Squadron aircraft
45 pilots participated
1 presidential fly over on the 75th anniversary of D-Day
1 route completed over Manhattan and around the Statue of Liberty
2,594,296 people reached on Social Media
Events covered by 195 individual accredited media
31 partners that helped to make every accomplishment a reality

Contributions to the completion and release of INTO FLIGHT ONCE MORE can be made to the Tunison Foundation, a non-profit 501(c)(3) charitable organization and the home of the D-day Squadron. Gift may be made on-line here ddaysquadron.org/ddsfilm. All gifts are tax-deductible to the extent allowed by law.

To read more about the D-Day 75 celebrations and the backstory behind them, be sure to also check out the latest Warbird Digest Magazine, which has dedicated the entirety of Issue #85 to this remarkable endeavor. 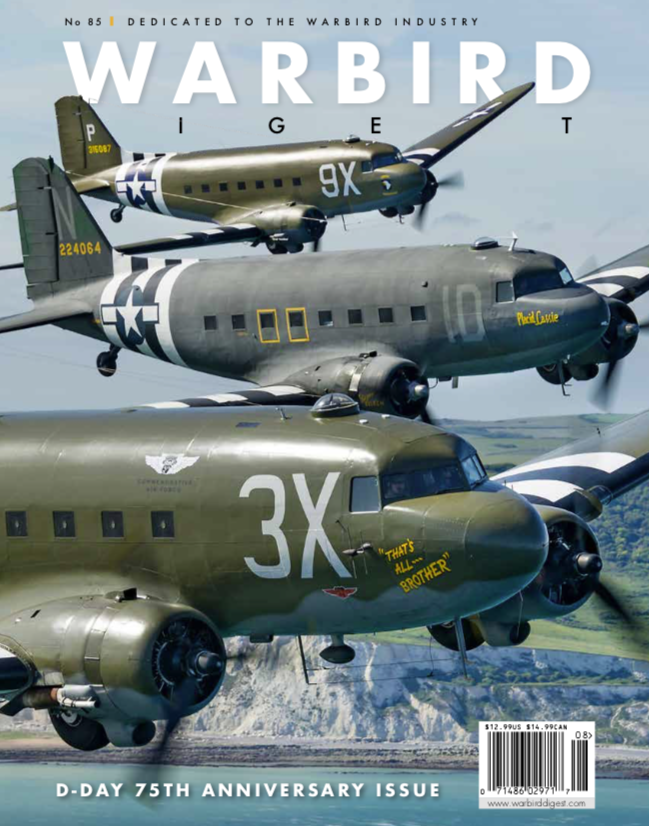